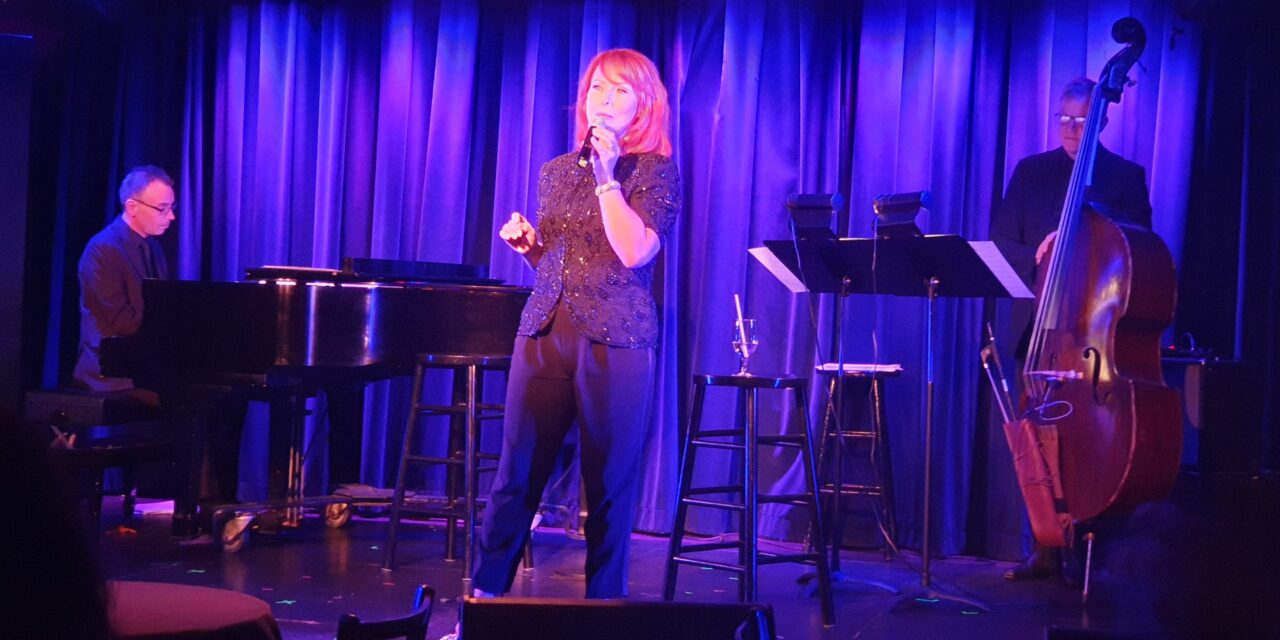 Bewitched:  The Life and Lyrics of Lorenz Hart . . .

Karen Oberlin, a longtime fixture on the New York cabaret scene and an award-winning performer, presented a one-off encore of her delightful Bewitched:  The Life and Lyrics of Lorenz Hart, first staged at Birdland in 2021.  Accompanied by the dynamic duo of the brilliant pianist/arranger Tedd Firth and the marvelous Steve Doyle on bass, the radiant and classically beautiful Ms. Oberlin brought panache and class, along with a deep understanding of the Hart canon and story.  Dressed in a sparkly black top over black pants, the red-headed star evokes a non-dancing Ginger Rodgers, with consummate show business skills and with a warmth and vulnerability that make her quite appealing.  The show featured nearly two dozen of Hart’s lyrics written with composing partner Richard Rodgers.

Ms. Oberlin arrived on stage as Mr. Firth played “My Romance,” only for the star to sing “Dancing on the Ceiling” (a signature Tedd Firth “bait-and-switch”), with a rubato verse before swinging the tune, with some scat to boot.  Interestingly, Karen sang the verse to every song performed tonight.  Some of these verses were rather obscure, making it exciting when so many of them led to “constantly surprising refrains.”

“Manhattan” was written for the 1925 review Garrick Gaieties.  In Karen’s telling, the composers were informed it “had no value,” yet it was this tune that ignited their long partnership of nearly 25 years.  (Their first song together was published in 1919.)  As a veritable tour guide view of the city in 1925, the picturesque lyrics takes the listener to many parts of “Manhattan, the Bronx, and Staten Island too,” through the eyes of a young, lovestruck couple living it up on a shoestring budget.  With such “Noo Yawk accent” rhymes as “spoil” and “goil” (girl), and “onyx” and Bronnix” (Bronx), it is as charming today as it was nearly a century ago.

Ms. Oberlin beautifully sang “Bewitched, Bothered and Bewildered” from Pal Joey.  She included risqué lines and delivery excised from most renditions of the song, like “I’ve sinned a lot, I mean a lot, but I’m like sweet seventeen a lot,” and the eye-opening “worship the trousers that cling to him.”  She related that when the show premiered in 1940, critic Brooks Atkinson’s devastating review pushed the self-loathing Hart on a downward spiral from which he would never truly recover.  Hart, who died of “alcoholism and sadness” at only 48, did not live to see the successful 1952 revival, nor the hit 1957 film starring Frank Sinatra and Rita Hayworth.  Similarly, for “I Didn’t Know What Time it Was” (which was in the movie, but was written for their 1939 Too Many Girls, Karen’s delivery made palpable the sexual innuendo of the original lyrics.

Another revelation came with a medley of “Prayer (Oh Lord, Make me as Movie Star)” and “Blue Moon,” essentially the same tune with completely different lyrics and intentions.  The first set of lyrics, never commercially recorded, were meant to be sung by Jean Harlow in Hollywood Party, though here it sounded almost like a gospel blues that might have made for a great Billie Holiday record.  It underwent several lyric changes and eventually made it out of the trunk for good as the romantic ballad standard.

After an emotional rendition of a song not written by Rodgers and Hart that touched upon today’s world problems, Karen sang a sorely needed uptempo number, “Mountain Greenery.”  Here, the verse was moved to the middle of the song to serve as a faux bridge.  The “two crazy people” of this clever lyric could well be the same couple from “Manhattan” a year later, having tired of the city and moved to their mountain greenery home in the country.   She followed this with Hart’s last song, written in the hospital shortly before his death in 1943, the extremely clever, if macabre “To Keep My Love Alive,” about a woman who killed all 15 of her husbands to avoid being unfaithful.  With audacious slant rhymes like “patricide” and “mattress side,” this was Ms. Oberlin’s Sweeney Todd-like moment, with expert assistance from the club’s sound and lights master, J.P. Perreaux.

A great gift came in the form of “It Never Happened Before,” an unpublished, unrecorded Rodgers and Hart song never previously performed, thanks to the generosity of Michael Feinstein, who had acquired the music and allowed Karen to unveil it in this show.  A fine number, Tedd Firth arranged it perfectly, and Ms. Oberlin sang it beautifully.

Larry Hart was a tormented soul, a closeted gay man who believed himself unappealing and unlovable.  These feelings were ruefully reflected in the 1936 song “Glad to Be Unhappy,” with lines like, “Unrequited love’s a bore, and I’ve got it pretty bad.  But for someone you adore, it’s a pleasure to be sad.”  Ms. Oberlin paired this in a medley with “Nobody’s Heart,” to great effect, with exceptional voicings by Tedd Firth.