Kate Baldwin & Aaron Lazar at 54 Below 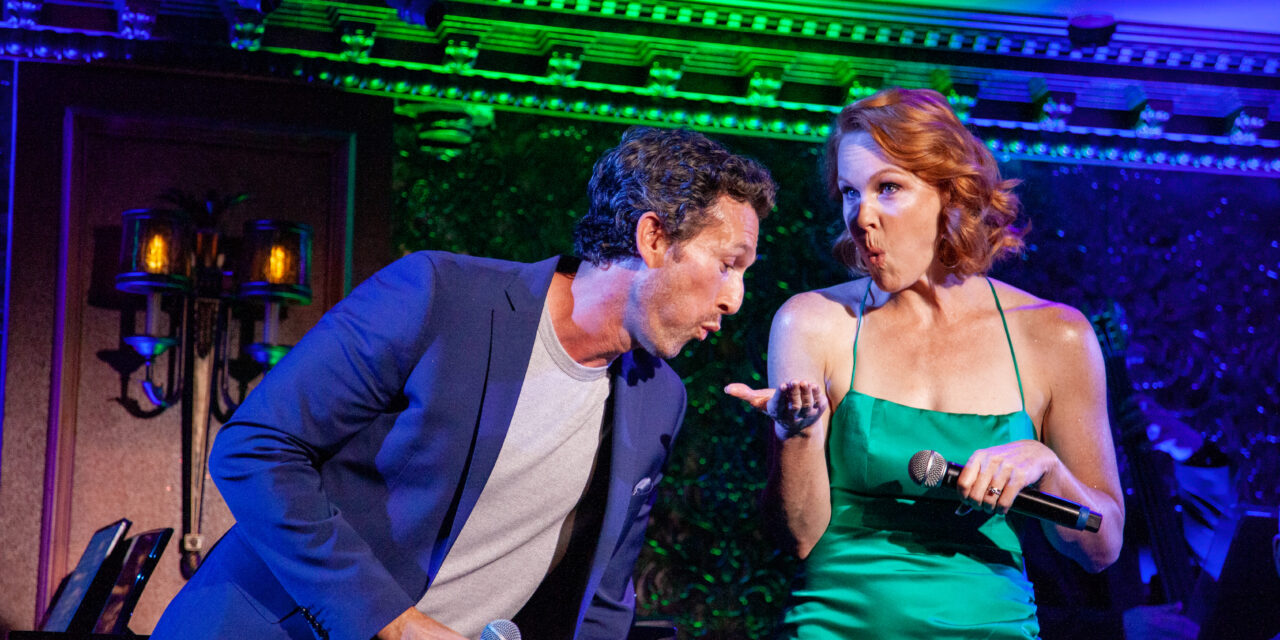 “Thank you for coming to our dress rehearsal,” quipped Kate Baldwin partway through the opening performance of All for You, the rather ambitious cabaret act she is performing with Broadway stalwart Aaron Lazar through July 23 at 54 Below. Honestly, I’ve seen many cabaret acts with shaky first nights, but it was a true shame that the forced banter, often unwieldy staging and other occasional mishaps ended up blemishing what may turn out (in later shows) to be an incredibly satisfying evening.

First off, the pair’s personal chemistry is undeniable. Having first worked together in 2003 in the regional try-out of Harmony, and then a decade later in Michael John LaChiusa’s Giant, the twosome reunited to universal acclaim earlier this year in a New Jersey production of Jason Robert Brown’s The Bridges of Madison County. They clearly adore each other and know how to blend their big, beautiful voices.

Naturally, the pair wowed the crowd with two duets from Bridges, the moving “One Second and a Million Miles” and “Falling into You,” while Baldwin served up a stunning solo rendition of “Always Better,” the musical’s stirring final number. Admittedly, these are not songs that work as well out of context as they do within the musical, but it was thrilling to hear them again – especially with the gorgeous accompaniment of Luke Frazier and the eight-piece American Pops Orchestra.

The remainder of the show was essentially divided (unequally) into songs the stars have successfully performed on Broadway, and those they hope to do someday. In the former camp, Baldwin dazzled with a sultry “Old Devil Moon” (from Finian’s Rainbow), while Lazar served up an ultra-passionate version of the operatic “Il Mondo Era Vuoto” (from The Light in the Piazza), which is a bit of a challenge for the audience since it’s entirely in Italian.

Spirited renditions by the pair of Richard Adler and Jerry Ross’ “There Once Was a Man” (from The Pajama Game) and Stephen Sondheim’s pun-filled “A Little Priest” (from Sweeney Todd) made one wish for immediate revivals of these shows with these stars.

Individually, Baldwin shone with a properly acerbic “Could I Leave You” (from Follies) and a wistful take on Rodgers & Hammerstein’s “You’ll Never Walk Alone” (from Carousel), while Lazar’s smooth baritone was put to excellent effect on Alan Jay Lerner and Frederick Loewe’s glorious ballad “If Ever I Could Leave You” (from Camelot) and Stephen Sondheim’s masterful “Finishing the Hat” (from Sunday in the Park with George).

Still, even through the show’s rough patches, Baldwin and Lazar were determined to give the proceedings their all, making it only fitting that their last (and possibly best) number was Jason Robert Brown’s “I’d Give It All for You” (from Songs for a New World). And the rapturous final ovation proved the audience fully appreciated their efforts – and their extraordinary talent.