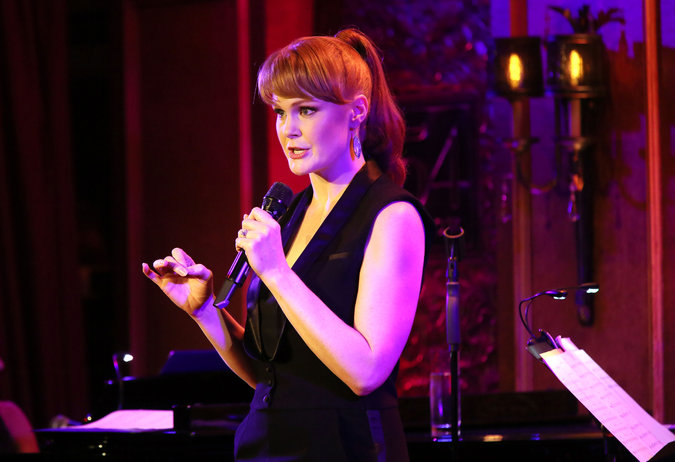 Kate Baldwin is a KNOCKOUT in her new show Extraordinary Machine—or as Kate calls it near the end of her concert, “Kate Baldwin’s Pop Adventure!”—at Feinstein’s/54 Below. A musical  theatre star known for classics like Finian’s Rainbow, as well as more contemporary fare like Big Fish, who knew she was a pop diva too? I’m seriously convinced there is no style she can’t sing.

Kate, looking smashing in a fitted red lace jumpsuit, struts up onto stage. At first glance, she has us. Kicking the evening off with the headline song of her cabaret, “Extraordinary Machine,” she struck up a relationship with the audience right away. Introducing herself whilst noting the tally of how many times “Meadowlark” has been sung at Feinstein’s/54 Below, she promised neither to add to that list nor really sing much musical theatre. As Kate reveals, she’s been dying to share her lifelong love of pop music; her plucky spirit draws the audience in.

What really makes her concert extraordinary are the stories she shares in between tunes. Before covering the 80s dance hit “A Little Respect” by Erasure, she joked about confusing/mishearing lyrics to trendy singles. She boosted the comedy by reminiscing about how pondering middle school dances can lead to Facebook-stalking childhood crushes. Finally belting out the number, she maintained the thought and imitated awkward dancing by staring at her feet each time the chorus chimed in. She’s a hoot, for sure, but Kate is also a sassy gal. “Stop Wondering” by April Smith showcased this quality to the highest degree. I found myself leaning over to my date and exclaiming how Kate needed to join us for cocktail hour. Her effortless abandon in both Loretta Lynn’s “First City” and Iris DeMent’s “Let the Mystery Be” made you wonder if Kate missed her calling  as a country star.

My favorite shtick throughout the performance was her voicing of familiar AIM (AOL Instant Messenger, AOL’s early version of texting) bleeps, door openings/closings, the works. They were introduced as she recalled using AIM to get to know her now husband over a theater contract. She inserted a groovy “Everyday I Write the Book” by Elvis Costello into the theme (featuring her three backup singers nailing the ending with a capella harmony). Kate cracked the audience up again as she demonstrated the choreo to “You’re a Grand Old Flag” (George Cohan) that her five-and-a-half year old son learned at school. As her family has just relocated to New Jersey, apparently it’s a joke amongst her friends, making a case for never moving to New Jersey. Concluding the family portion, she drew upon a theatre song, “Breeze Off the River” (David Yazbeck) from The Full Monty (her first Broadway musical) and a Billy Joel classic, “Lullabye,” to offer an emotional window into motherhood.

As much personality as she exuded, Kate was unmatchable in her vulnerability, well expressed in Ron Sexsmith’s “Secret Heart” and Ingrid Michaelson’s “Always You.” Matt Doyle, coming to the Barrow Group’s revival of Sweeney Todd next spring, served as a special guest on a mash-up of Rufus Wainwright’s “Oh What a World” and Stephen Trask’s “Wicked Little Town.” The pair met on LaChusia’s Giant, and Matt’s star power complemented Kate strikingly. The hands-down best anecdote goes to Kate’s time spent early on in Chicago, singing Aretha Franklin on Harbor Cruises. She reported that a group of church ladies one day were not having her performance, but she, fearless, tried Aretha again with “You’re All I Need.”

Kate wrapped up the night with, in her words, a nod to what may be the next year or twelve of her life in next spring’s Broadway revival of Hello Dolly. Staying true to the mood, she brought out an earthy vibe to “Ribbons Down My Back” (Jerry Herman) with guitar accompaniment. Kate’s finale was the always crowd-pleasing Mika tune, “Happy Ending,” yet she harkened back to her genuine essence of combining pop and musical theatre with a song from off-Broadway’s Songbird.

I could go on and on about her notes and vocal control, but I am running out of room. You need to buy tickets to her show at Feinstein’s/54 Below. Last shout-outs to her music director, Kris Kukul, and director, Robbie Rozelle!