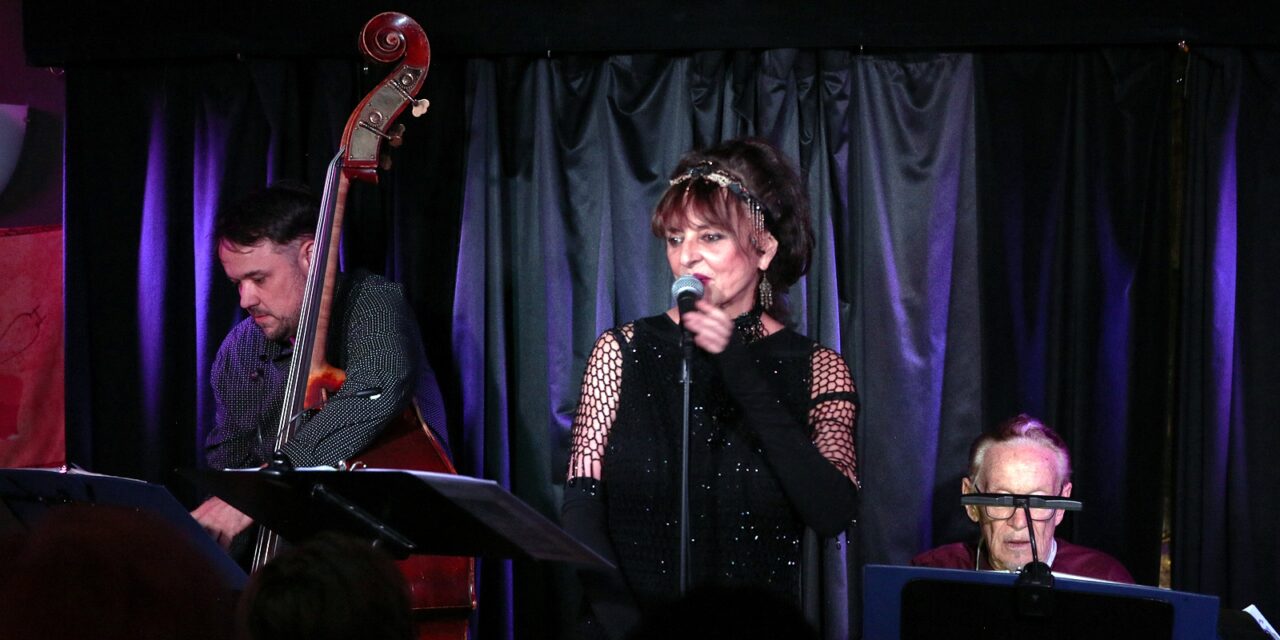 A Musical Journey of Ancient and Modern Myths

Performer Kay Kostopolous is a highly accomplished Bay Area jazz singer, actor and Stanford University faculty member whose name will be unfamiliar to most New York audiences, but not for long.  The talented singer, currently based in New York, made her Pangea debut on November 22 with her Black Olive Jazz, presenting a unique set of music and stories rooted in Greek mythology.

The lineup for Black Olive Jazz features reed maestro Noel Jewkes from the Bay Area, providing brilliant tenor sax, soprano sax and clarinet accompaniment.  The excellent quintet for this performance also had Sue Maskaleris was on piano (and vocals for one number), John Merrill on guitar, Sam Bevan on bass, and Ronen Itzik on percussion.  The band is tight, with excellent arrangements written primarily by Mr. Jewkes.

The lovely Ms. Kostopolous, whose ageless Mediterranean beauty perfectly complements a show incorporating Greek goddesses, set the mood with an excellent rendition of Dizzy Gillespie’s “A Night in Tunisia.”  The star makes extensive use of sensuality in her performance, often with the aid of Turkish finger cymbals, called zills.  This former professional belly dancer uses them as the percussion instruments they are, with their gentle clanging adding an exotic aura to even the jazziest arrangements, and they were especially evocative on “Tunisia.”

A dreamy tune called “Isfahan” had Mr. Jewkes on clarinet, and Ms. Kostopolous speak of “Hades and shady ladies.”  Guest performer Jeff McCarthy, a Broadway and television performer and voice actor with a deep, mellifluous baritone, narrated the myth of Samson and Delilah.  (You may have heard him on television as the voice of “Michigan J. Frog,” the mascot of the old WB Network.

Ms. Kostopolous turned to Homer to relate the Goddess Circe and King Odysseus to introduce “Enchantment” and “Temptation.”   The star explained that Circe was an enchantress, who sometimes used her magic potions to turn men into animals.   An enchantress herself, Ms. Kostopolous used only her voice and her eyes to enchant the Pangea audience.

An original song by Ms. Kostopolous and Mr. Jewkes, “Cleopatra and the Viper,” transported the listener to ancient Egypt.  Mr. Jewkes played his soprano sax like a snake charmer’s pungi, with the Middle Eastern sound eventually evolving into more of a traditional swing number.  This song has the making of a new standard, and was a highlight of the set.

Mr. McCarthy, whose singing voice and style is reminiscent of the late Robert Goulet’s, performed “Stranger in Paradise” (from Kismet) and “All the Things You Are” (Jerome Kern, Oscar Hammerstein II).  Both songs are normally sung as ballads (though sometimes swung as instrumentals), but Mr. McCarthy made the “old college try” to swing them.  As Ms. Kostopolous declared, the Fates of Greek mythology ensure that all beings live out their destinies.  As fate would have it, Mr. McCarthy had better luck singing a duet with Kay on the Rodgers and Hart classic “Where or When.”

A brilliant choice for a closing number came in the form of “Our Lady of the Underground” (from the current Broadway hit Hadestown).  While most of the songs in this show merely alluded to Greek mythology and figures, this song is quite literally the stuff of Greek mythology, sung by the goddess Persephone in Hadestown.  The band members chimed in (like a Greek chorus) when Ms. Kostopolous sung the words of the title.  She gave each member a spotlight for a blues solo.

Kay Kostopolous is a fine performer who will leave you enchanted and informed.  New York is lucky to have her.

Photos by Adina Taubman except where indicated