Ken Page: There’s So Much To Talk About 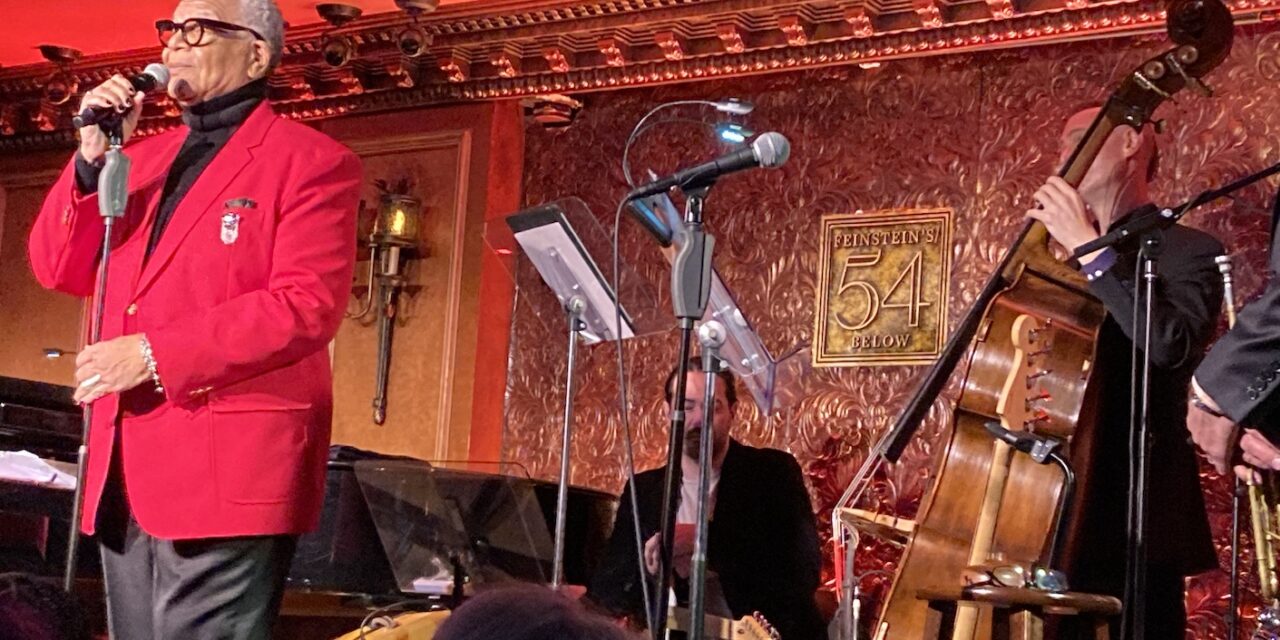 Ken Page is easy to love. And loved he is—very much, judging by a sold-out Feinstein’s/54 Below on May 4. The room was packed by friends and fans, including a young fellow whose Dad made sure the lad would get to see one of his faves (the power of Oogie Boogie, and Ken, of course). The notion that Page is just divine may be true. He exudes a warmth and light that filled the premises during “There’s So Much To Talk About,” producing a level of adoration and appreciation that caused grown people to act like teenagers at a rock concert. Page and his beautiful show triumphed, and it was inspiring to behold.

This homecoming concert encompassed the material he introduced and/or performed on Broadway, as well as a mix of other tunes across genres. In a career spanning at least 45 years, there’s plenty to choose from, and the selections that made the cut were perfection, from Broadway’s Guys and Dolls to It Ain’t Nothin’ But the Blues and a whole lot in between (and it says something when just about every number in a setlist is a bona fide high point). As for those blues, Page can wail with the best of ‘em. He aced “Tryin’ Times” (Donny Hathaway, Leroy Hutson) and “Deep in the Night” (Helen Miller, Eve Merriam), which had audience members excitedly waving dinner napkins in the air. Rock star Page also took a deep dive into R&B with Willie Dixon’s “Hoochie Coochie Man,” with a bit of innocent bump and grind and large amounts of spirited fun. With supreme storytelling ability on Chuck Willis’ “Betty and Dupree” (based on an actual incident in Atlanta around 1912), Page certified that he’s a master of timing in musical phrasing and textual narration.

The alchemical mix of Ken Page is somewhat wondrous. He’s like an old-time preacher, a man-of-the-people orator, your best friend, a griot, a point of light, an energy generator: smart, sophisticated and so much more—and in all of this he’s genuine, unassuming and light-hearted. When he’s “deep” he’s deep with a light touch. In the now seemingly obligatory referencing of the pandemic and its punishing two-year enforced isolation, he acknowledges the separation, but is quick to pull us into the present, in the moment, with the positivity of “we have survived till this very moment—let’s celebrate that!” His narrative was no doubt scripted, but seemed organic and spontaneous—the mark of a consummate performer. In his closing number, “Shambala” (Daniel Moore), which he said “means more to me now than ever,” a window was opened wide into the spiritual gravitas that’s so much a part of this special human being.

Several very high points of “There’s So Much To Talk About” came from the Broadway canon. Famously, Jule Styne wrote the score of Funny Girl with Barbra Streisand firmly in mind. She’d already won a Grammy Award when she was cast as Fanny Brice, so Styne wrote complex rhythms and harmonics into the tunes, with “Don’t Rain on My Parade” (lyric by Bob Merrill) standing out as a real challenge. In the hands of Page it was absolute perfection. In an homage to the late Stephen Sondheim, Page softly and emotively offered the title song from the master’s Anyone Can Whistle, with piano accompaniment only. Of course, the encore just had to be “Ain’t Misbehavin” (Fats Waller, Harry Brooks, Andy Razaf), the title song from the Broadway show for which Page is much-lauded and remembered.

“There’s So Much To Talk About” was ably directed by Richard Jay-Alexander. The band was completely in the groove backing Page. One measure of a performer’s “success” on stage is in the band’s attitude. These cats were absolutely into the scene, having a great time playing along with, and for, Page. The delightful Joseph Joubert directed. He’s always a joy to watch at the keys, with his ability to concentrate on the job, play amazing piano and enjoying himself in the bargain. Jerry DeVose played electric and upright bass, Perry Cavari was responsible for percussion and Peter Douskalis supplied guitar. Featured was trumpeter John Walsh, whose beautiful tone added depth to many of the numbers on Page’s setlist.

Ken Page performed “There’s So Much To Talk About” May 4 at Feinstein’s/54 Below (254 West 54th Street, between Broadway and Eighth Avenue). www.54below.com