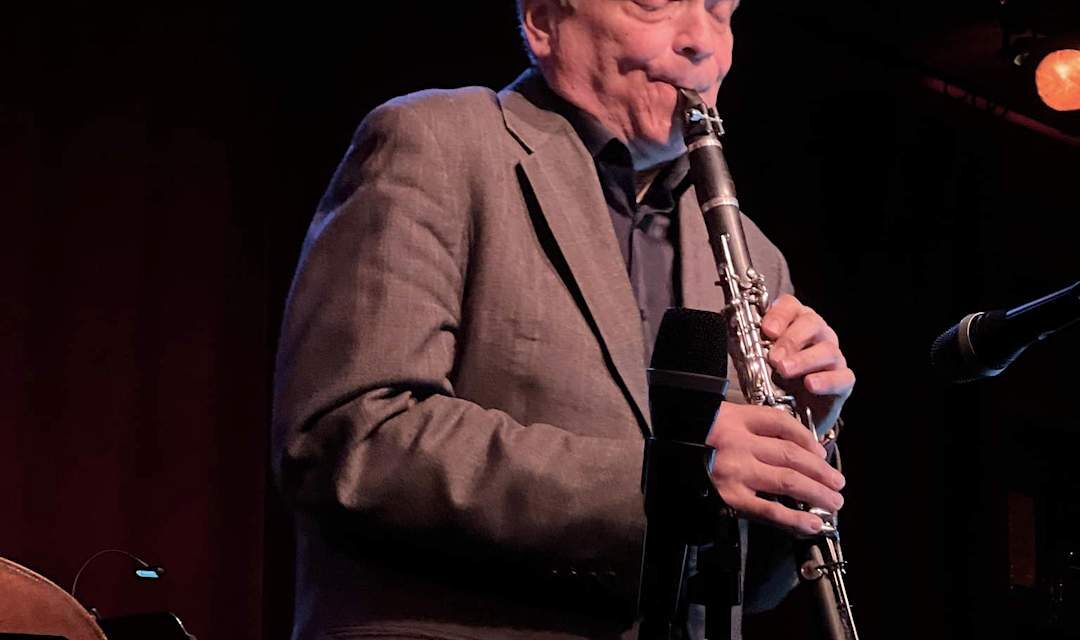 Ken Peplowski has been on the New York jazz scene since 1981.  Arguably one of the best tenor sax and clarinet players in the world, he is nearly as funny as he is brilliant musically.  “Peps” had the opportunity to play with an “unretired” Benny Goodman in 1984, and has collaborated with many of the great names in jazz, including such luminaries as George Shearing, Hank Jones, Bill Charlap, Bucky Pizzarelli and John Pizzarelli, Jr., as well as the recently deceased Dave Frishberg.   A regular at Birdland Jazz for many years, November 23 was the first of a unique five-night, ten-set stand in which no song will be repeated.  “Why? Because I’m criminally insane,” he quipped.  “Hidden Treasures” is a celebration of lesser-known tunes by the best-known composers of the Great American Songbook.

Peplowski was off to a great start in this set of nine songs, with several great surprise choices.  He opened with “Sleep” (Earl Burtnett and Adam Geibel), originally a jazz waltz by Fred Waring and his Pennsylvanians, until Benny Carter redid it as a swing tune.

Now on clarinet, Peplowski noted that the great Hank Jones played on his recording of Ellington’s “Mr. Gentle and Mr. Cool” (Duke Ellington/Harold Baker).  He was a bit of a clarinet pied piper here.  A wild bass solo by Martin Wind was interspersed with flashes of notes from Peplowski.  Three notes (two octave notes surrounding a middle note) were the glue that held each solo section together.

Peplowski left the stage for one song to give the 30-something pianist Glenn Zaleski the spotlight with Charlie Parker’s “My Little Suede Shoes.”  Zaleski, also a noted jazz composer and arranger, did not squander his opportunity.  Sitting off stage, “Peps” looked on like a proud papa.

For “All My Life” (Sidney D. Mitchell/Sam H. Stept), associated with Teddy Wilson and Billie Holiday, Peplowski’s virtuosity created an intimate sound and melodic approach one might expect from a singer more than a reed player.

The rarely recorded “How Beautiful is Night (With You)” (Robert Farnon), had a haunting melody, played beautifully.  Farnon, a Canadian composer and conductor, famously arranged Frank Sinatra’s “Great Songs of Great Britain,” a somewhat obscure 1962 album that is a favorite of Peplowski’s.

Peplowski improvised a long, mysterious solo without the rest of the quartet, with the group finally joining in to reveal a gorgeous rendition of “All the Things You Are” (Jerome Kern/Oscar Hammerstein II), returning the song from its typical swinging tempo to a slow, sexy ballad with long lines and languid notes, with exceptional breath control.  It picked up only slightly towards the end of the piano solo to a more forceful assertion of the opening measures, led by Martin Wind’s strong bass playing.

Peplowski got choked up talking about a return to live music after the long pandemic, and his dog, Corky.  He joked, “If I could sell just 10 more copies of my CD, I can pay for Corky’s operation,”  (Corky is fine)  and introduced “A Night in Tunisia” (Dizzy Gillespie).  Here, the drums led the music with its complex driving rhythm that would rise and fall in crests.  It was almost like making love.  Bassist Martin Wind made an impressive use of challenging slides, as well as two- and even three-note chords, playing at times as if his double bass was a giant guitar.

The Ken Peplowski Quartet is playing at Birdland through Sunday, November 27.