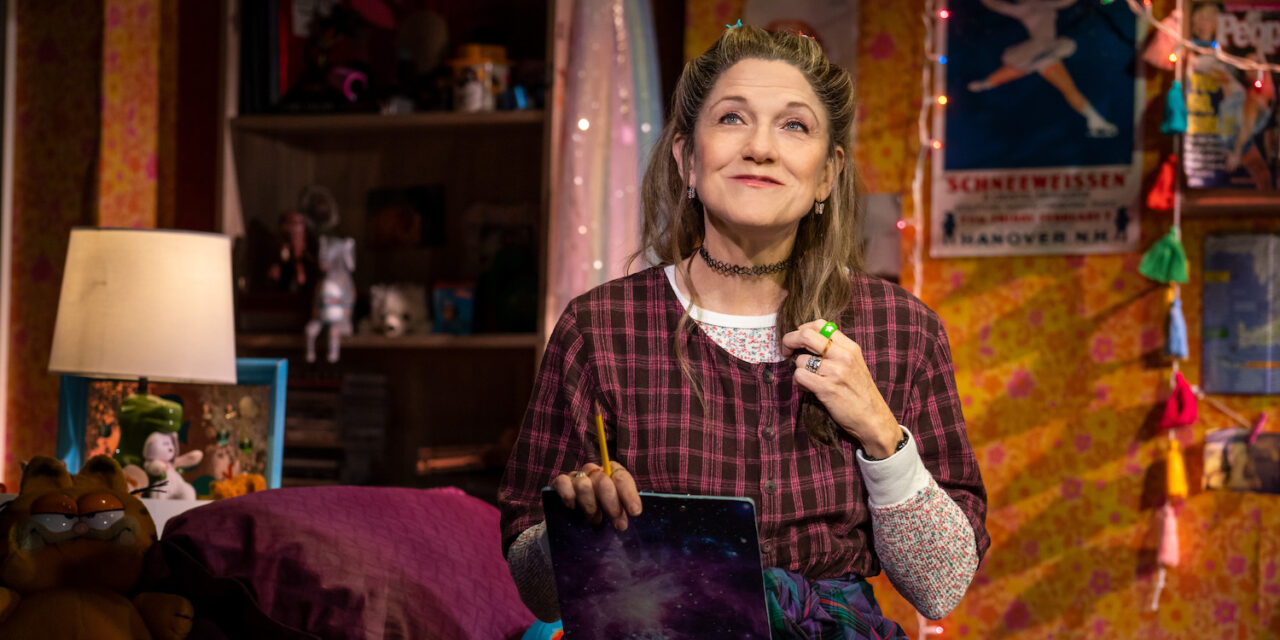 The quirkily charming new Broadway musical Kimberly Akimbo, at the Booth Theatre, brings to mind a small number of similarly inclined, small-bore, bighearted shows that also began Off-Broadway and deal with how families react to a member with some challenging dilemma. Those that come quickly to mind include Next to Normal, which deals with bipolar disorder, and Fun Home, about lesbianism. To these intimate domestic tuners we can add Kimberly Akimbo, with its teenage heroine, who suffers from a fictionalized version of a rare syndrome—one in 50 million—similar to progeria, which makes her age four times as rapidly as anyone else.

There’s another connection between Fun Home and Kimberly Akimbo in Jeanine Tesori (Thoroughly Modern Millie), who wrote the agreeable music for each. The latter’s richly appealing score is set to the funny but touching words of David Lindsay-Abaire (Shrek), who wrote the 2001 (New York, 2003) comedy from which the musical, which premiered at the Atlantic Theatre last season, was developed. I was unable to catch that multi-award-winning Off-Broadway show so I was grateful to see that the Atlantic cast, all nine of them terrific, is back in tow for the Broadway staging.

At four, Kimberly Levaco looked eighteen, and at 16, which she turns during the show, she’s supposed to look like she’s in her 70s (Victoria Clark, the superb actress playing her, is 63). In its fanciful exploration of how Kimberly navigates the pathways of high school angst, you might call hers a coming-of-aging story. It’s 1999 in pre-cell phone Bergen County, New Jersey (listen for the familiar locales), where Kimberly lives with her boozing father, Buddy (Steven Boyer, Hand of God), and her very pregnant, video diary-making, hypochondriac mother, Pattie (Allie Mauzey, Hello, Dolly!), both arms in soft casts after carpal tunnel surgery. Into this already dysfunctional ménage barrels Pattie’s show-stopping, loudmouthed, larcenous sister, Debra (Bonnie Milligan, Head Over Heels). Ironically, the most mature family member is the youngest who, ironically, looks the oldest.

Kimberly’s high school swain, who barely bothers about her affliction, is the nerdy Seth (Justin Cooley). He works at the local ice skating rink, plays the tuba, and has a passion for anagrams, which inspires the song “Anagram,” as well as the phrase “Cleverly Akimbo,” derived from Kim’s name. The very embodiment of a good kid, he even sings about it in “Good Kid,” which Cooley makes one of the show’s delicious delights.

Also in Kimberly’s orbit are four vocally talented nerds—Delia (Olivia Elease Hardy), Martin (Fernell Hogan), Aaron (Michael Iskander), and Teresa (Nina White)—putting together an ensemble for Show Choir, their differing sexual orientations creating a Chekhovian daisy chain of unrequited longings. Harmonizing perfectly, and dancing to the choreography of Danny Mefford, they constitute a sparkling chorus; toward the end, they truly sparkle when they enter in blue sequined costumes for their act. Whatever their actual ages, they look their parts more than most so-called teens in Broadway shows.

Despite her ailment, which could kill her at any minute—16 being the average age limit for such people—Kimberly struggles to maintain a smiling existence, although family circumstances don’t always help support her. Most outlandish is the presence of Debra, Kimberly’s farcically felonious, expletive-expelling aunt, who steals a U.S. Post Office box, lugs it into the Levaco basement, and recruits Kimberly’s friends to extract envelopes with checks so they can cash them in with forged signatures. Laugh-worthy as it is, and even accepting the premise of our heroine’s condition, it tests the boundaries of how much you’re willing to suspend your disbelief.

Jessica Stone directs with perfect timing and panache on a cleverly versatile set by David Zinn whose units slide in, out, and, from a trap, up, providing mostly substantial backgrounds for the episodic action. The stage floor is even made of something that allows the actors to execute some modest ice skating on it. Sara Laux’s costumes are often wittily appropriate, never too trapped by the tropes of late 90s teenage trendiness, while Jeanette Oi-Suk Yew’s lighting provides all the right overtones.

Not one performance can be faulted, but those that will long remain iconic belong to Miss Clark (The Light in the Piazza) and Miss Milligan. The former manages the difficult feat of a sexagenarian playing a teenager believably without exaggerating her girlish mannerisms (and, man, can she sing!), while the latter is a force of nature, her cocky wickedness not quite disguising an underlying niceness (ditto about her singing!).

The nearly two-and-a-half-hour show ends at the Great Adventure theme park. Although the show may be very good, it’s not quite great, the way Guys and Dolls, for example, is great, but Kimberly Akimbo remains an upbeat adventure on a downbeat subject that is definitely worth experiencing.