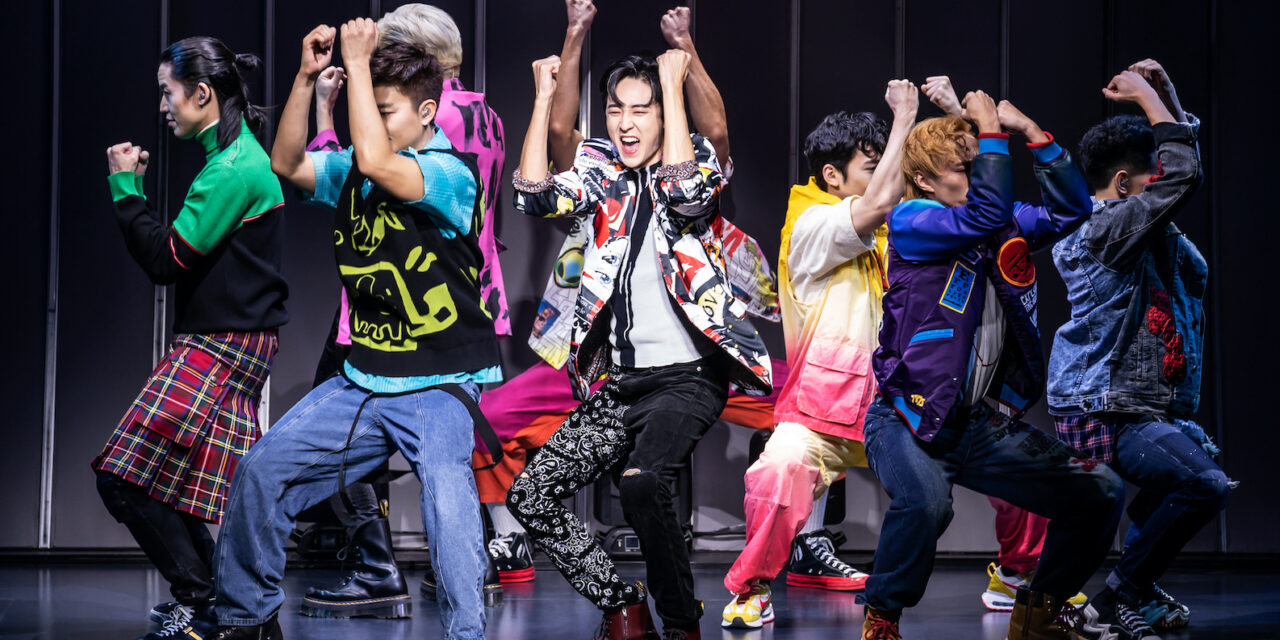 It was sometime after 5:00 P.M. and I was on the subway heading from my home near JFK for the Broadway production of KPOP when I received an email that a principal performer was out and would be replaced by an understudy. I could cancel if I wished, and reschedule. I was already well on my way, had a difficult-to-reach friend waiting at the other end, and knew that my calendar would make rescheduling a problem. I decided to ride it out rather than cancel, turn around, and go home. Moreover, this Covid-riddled season has often proved that Broadway understudies are often as good as, or even better, than those they’re replacing.

Missing was the star, Luna, an actual K-Pop artist who even has an article about her in the Playbill. As it turned out, her role as a rising K-Pop star was very capably handled by Amy Keum, a diminutive package of talent, usually a member of the ensemble. Although I’m sure Luna does a terrific job, very little about the show itself made me feel that I’d want to sit through it again. I suspect that feeling was shared by the substantial number of theatergoers who shuffled out at intermission, further depleting a house that looked at the start to be about only two-thirds full.

I’d already reviewed the show’s 2017 version, given Off-Broadway at A.R.T./New York Theatres, which, apart from the extravagant flashiness of lights, costumes, choreography, and music, was radically different. That, in fact, was an immersive experience where the audience was separated into small groups and led through different scenes that other groups saw at different times. It was intended to expose the inner workings of the exploitative K-Pop industry, which has become such an international music phenomenon. The new Circle in the Square production completely abandons both the immersive concept and the book, although a few of its dramatic threads have been used to create a new, even less interesting one.

Jason Kim is again responsible for the book; Helen Park for music, lyrics, music production, and arrangements; and Max Vernon for the music and lyrics. Gabriel Hainer Evansohn returns as set designer, with an entirely new design that exploits the Circle’s U-shape with a tongue-like stage at one end that is capable of extending far into the space, and a large, much-used elevator trap. Lighting designer Jiyoun Chang is new, as are costumers Clint Ramos and Sophia Choy, although the eye-popping effect of their often dazzling creations is much the same as what the original designers contributed. Peter Nigrini’s brilliant projections play an important role as well. Among the other creatives, Jennifer Weber renews her vibrant choreography and Teddy Bergman his high-octane direction (except for the banal book scenes).

The new premise pretends that an American filmmaker named Harry (Aubie Merrylees) is filming a documentary, his intrusive methods even recording private moments with the characters unaware they’re on camera. When the music—mostly power-blasting, heavily rhythmic explosions involving either RTMIS, a girl group of five, or F8 (i.e. “Fate”), a boy group of eight—stops, so, basically, does the show so we can sit through flatlining soap-operatics. One segment, for example, covers the conflict of Brad (Zachary Noah Piser), a mixed-race singer, with his bandmates over his presence in the troupe. The boys, at least, have something to bicker about. The girls, not so much.

The principal storyline examines the career of the ambitious young star, MwE (played by Luna’s understudy, Miss Keum), by her stage mother-like micromanager, Ruby (Jully Lee), a failed K-Pop star now heading a company called RBY. The concept requires us to accept that we’re seeing it over time, as recorded on video whose dates we’re informed of when they appear on screens both upstage and overhead, like those at arena events. It’s all backstage cliché, however, written in uninspired dialogue that the actors, for all their abilities, fail to make convincing.

Largely because of the concert-like last twenty minutes or so, the grand takeaway is of a cast of energetic, highly gifted singer-dancer-actors celebrating the sheer joy of performance. In number after number they carry out with perfect coordination the choreography’s kaleidoscopic variations on the kind of split-second, robotic, characterless movement so common now at music concerts and on TV variety shows (not to mention the new Broadway musical & Juliet).

As I wrote in 2017, “There’s a ballad or two, but most of the music, sung largely in English but with many infusions of Korean, is in the raucous, unrestrained, thumpingly rhythmic, dance-inciting style associated with the production numbers of American stars like Bruno Mars, Beyoncé, Niki Minaj, and the like, or pop groups on the order of Fifth Harmony or One Direction. It combines many types of pop music, including hip-hop, and allows for lavish choreography, eye-popping lighting, and a pounding sound that all but blurs the lyrics.”

I must acknowledge the joyful reaction of many in the audience with their applause and frequent shout-outs on every big note (like audiences on “The Voice,” etc.). They helped to snap me out of my boredom but never enough to make me wonder when the seriously overlong show (two hours and 15 minutes) would end.

KPOP. Open Run at the Circle in the Square Theatre (235 West 50th Street, between Seventh and Eighth Avenues). www.kpopbroadway.com