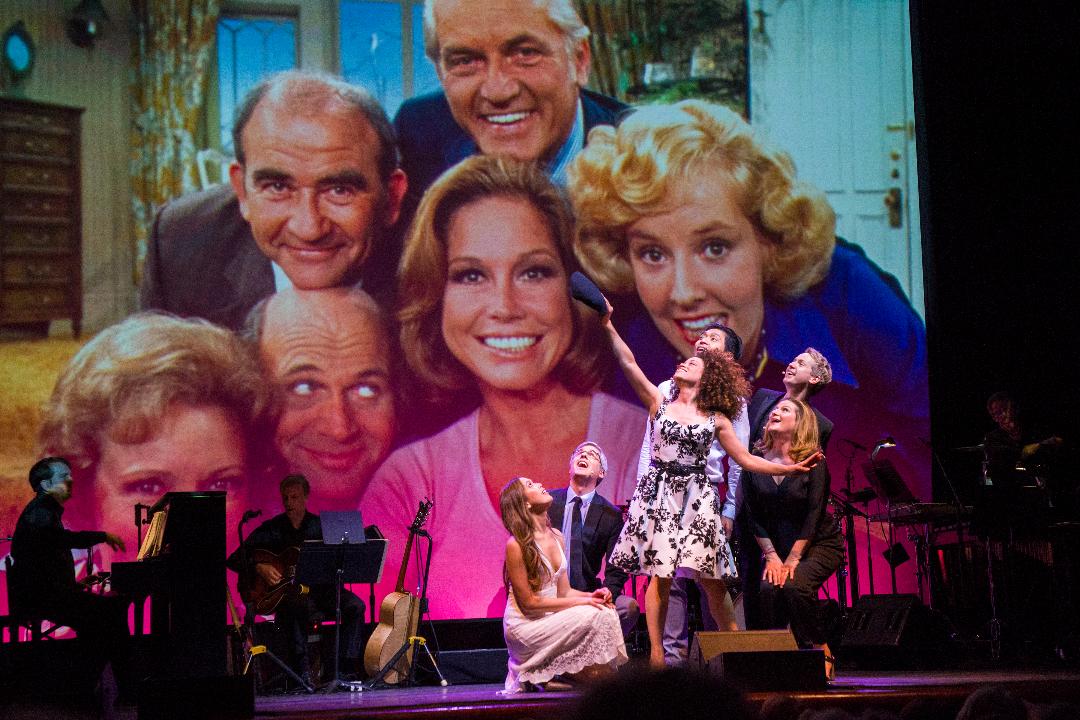 Lyrics & Lyricists – the remarkable Songbook Series at 92Y completes its 49th Season with “Live and in Living Color: Songs from TV” hosted by Mo Rocca. 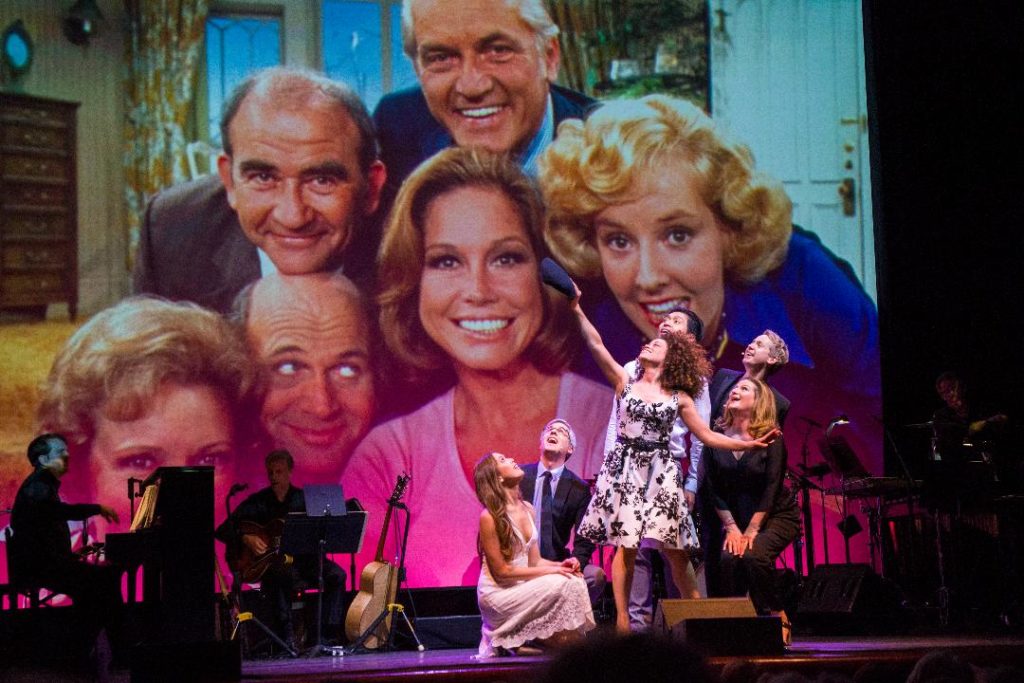 After nearly half a century of educating and entertaining audiences, Lyrics & Lyricists, the famed series at the 92Y, continues to come up with new and exciting concepts. This last concert of the season, “Live and in Living Color: Songs from TV” is remarkable and kudos to the cast and the Production Team that made this happen.

It certainly did “take a village” to put this show together and Rob Berman served as co-artistic and music director along with Chase Brock who also choreographed the incredible dance numbers (with dancers from The Chase Brock Experience).  Sara Lukinson wrote the intelligent script with Mo Rocca who was a delightful host and ofttimes joined the cast to sing and dance. The singers featured were first rate: Christine Allado, Ana Gasteyer, Marcy Harriell, Paolo Montalban and David Turner. The band led by Rob Berman with arrangements and orchestrations by Rob and Larry Moore, had Eric B. Davis on guitar, Dick Sarpola on bass, Sean McDaniel on drums and Gregory Landes on percussion. Credit to Dan Scully for the amazing projection designs, and John Kelly for the fine lighting.

In the program notes, Sara Lukinson talked about the impact that TV has had on our lives.  In 1946 there were 7,000 sets in homes, and in 1950 over five million. By 1955, half the homes in America had a TV. “TV was now a cultural force in search of the best talent, and talent sought out the limitless possibilities TV seemed to offer  It was a training ground for aspiring men and women and a playing field for the already famous – writers, actors, singer, musicians and composers.”

The show opened with Mo Rocca center stage in an easy chair watching The Ed Sullivan Show as the cast joined him to sing about that famed TV variety show. Steve Allen was the first host of The Tonight Show and in 1956 wrote “This Could Be The Start of Something” (1956-The Bachelor) sung by Anna and Paolo. Nobody could forget watching Mary Martin as Peter Pan flying into our homes and Christine sang a lovely rendition of “Never Never Land” (Comden & Green-lyrics, Jule Styne-music).  Richard Rodgers wroteAndrocles and the Lion (1967) for TV, and David and Christine sang “Strangers” from that show.

In 1957 Rodgers & Hammerstein wrote a musical of Cinderella especially for TV, and over 100 million people stayed home to watch it live with a 33-piece orchestra. Marcy and Ana performed “The Stepsisters’ Lament,” Paolo “Ten Minutes Ago” and Christine joined him in “The Sweetest Sounds” written for No Strings, but “Interpolated” into the 1997 Cinderella revival. Mo Rocca’s “Come to the Supermarket in Old Peking” was terrific (Cole Porter’s Aladdin-1958) as members of the cast brought him some of the unusual items listed in the song.

TV in the 1950’s brought us American Bandstand and many of the young singers who performed on that show became legends.  “Diana” written by a 17 year old Paul Anka was sung by Paolo, and Connie Francis became a star singing “Who’s Sorry Now” (Kalmar, Ruby & Snyder 1958) and it was beautifully performed by Ana.

One of the highlights was the first act closing called a “TV Theme Song Medley” featuring twenty-one famous themes that are embedded in our brains. As the cast acted out each of these recognizable themes, photos of the shows flashed on the screen from Happy Days, to Cheers, to The Brady Bunch, to All in the Family to Mary Tyler Moore and more.

Act 11 opened with the band playing an “Overture” of famous instrumental themes. Then Mo and David performed a darling song and dance routine to “This is It” – Bugs Bunny’s Theme song written by Mack David and Jerry Livington. Mo mentioned that over 120 musicals were produced for TV, including Our Town (1966) and the song “Love and Marriage” (Sammy Cahn & Jimmy Van Heusen) came from that show and David & Christine turned this popular song into a one act play. Marcy performed a lesser known Hal David and Burt Bacharach song “Try to See it My Way” from On The Flip Side (1966). In the same year Stephen Sondheim wrote “Take Me To The World” from Evening Primrose performed tenderly by Christine and Paolo.

The Batman logo suddenly appeared on the screen and Neal Hefti’s Batman theme was played as the dazzling dancers recreated the way it was performed on Hullabaloo in 1966. Most of us grew up on TV and children’s shows were a great part of our childhood.  Mo sang a sweet version of “It’s You I Like” from Mr. Rogers’ Neighborhood. Of course, Sesame Street was very influential and Ana, Marcy and David performed a medley including Jeff Moss’s “I Don’t Want To Live on the Moon,” “Rubber Ducky” and Joe Raposo’s “Bein’ Green” – Kermit’s song about what it is like to be different and learning to accept who you are.

Nat King Cole, Frank Sinatra and many great stars had TV shows and we are lucky to be able to see them today. Judy Garland’s amazing TV show lasted only one year and Ana and Marcy did a bang up job singing the show stopping duet that Judy and a 21 year old Barbra Streisand sang in 1963 of “Happy Days Are Here Again/Get Happy.” The show closed with the iconic song from the 1971 Coke ad sung by the entire cast “I’d Like to Teach The World to Sing” as we saw a film of young people of different nations singing together.

Just when you thought the show was over and couldn’t get any better, the cast starting to sing “I’m So Glad We Had This Time Together” from The Carol Burnett Show (1967) written by Joe Hamilton, a remarkable film appeared on the screen with great moments of TV throughout the years. To quote Sara Lukinson “A song is a miracle of a thing.  How it can transport us back to the sublime and the silly, the entertaining and the enthralling.  Long after the TV shows have been forgotten, we will remember these songs. Together.”