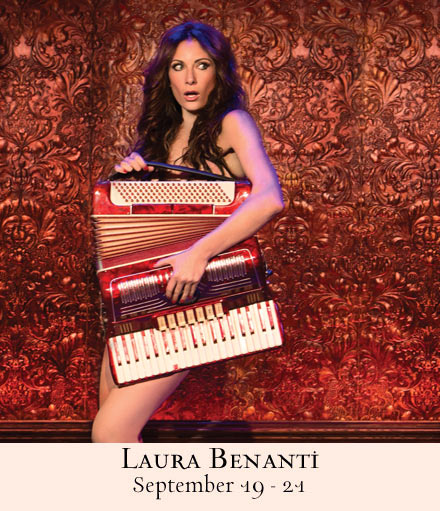 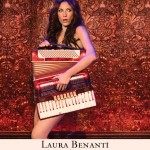 No, I don’t think so!  Clear as a bell Benanti doesn’t exactly fit that description as she sings “I’m Old Fashioned” while texting and taking photos of the audience on her cell phone at 54 Below.  She’s charming, sexy, folksy and as real as they come.

This Broadway Tony Award (Gypsy) winning beauty grew up on West 54th Street riding her bicycle and singing songs from Annie at the top of her lungs while the neighbors complained.  She knew Studio 54 when. . . she’s got the real scoop – everything in the room here at 54 Below. . . entirely made of cocaine!

With the wit and timing of a great comic, Laura Benanti, soprano extraordinaire, enthralls her audience as she moves effortlessly, timing and phrasing perfection, from the great American songbook – “My Time of Day” (Frank Loesser) to Joni Mitchell (He Comes For Conversation) to the more esoteric contemporary writings of her brilliant Musical Director Todd Almond and “Tilly’s Aria” and on to her own musical renderings like her “Ukulele Song” where she was pooped on by a bird . . .lucky? yucky!

By the time she gets to “Inappropriate Medley” of many songs, many composers for all the single ladies. . . Respect, Proud Mary, et al., the audience is rolling in the aisles!

Stories about her show with Todd on a gay cruise to Alaska are priceless. It’s worth the price of admission to hear these tales so I’m not going to give it away.

There is her serious side as she relates Harry Chapin’s “Mister Tanner,” a response song written about a man who just loved to sing because it made him whole until a nasty critic gave Mr Tanner a negative review and he never sang again; it wasn’t his livelihood – he just sang from his heart and soul.  Sad!

Encoring with “Model Behavior,” from her Tony nominated performance in “Women on the Verge of a Nervous Breakdown,” as the ditzy model Candela, was a perfect ending to a perfect evening!

Benanti possesses all the elements that make for a great talent.  She’s playful, sincere, humorous and free, doesn’t take herself too seriously and knows how to engage her audience so they feel they’ve been best friends with Laura for a long time!

With her are her uber talented musicians led by Todd Almond on piano (who also arranged her songs) and Brian Ellingsen on bass, Michael Aarons on guitar and Sean McDaniel on drums and percussion.