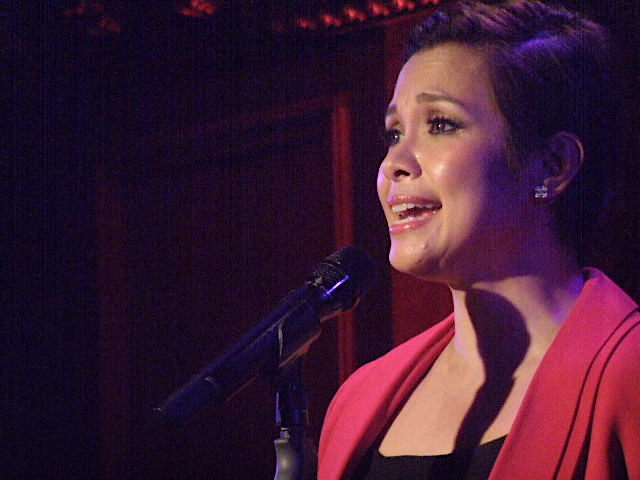 Just before Broadway’s lyrical soprano Lea Salonga, best known for her pivotal roles in Miss Saigon and Les Miserablés, launches into the 2013 R&B viral sensation, “Blurred Lines,” made popular by such artists as Robin Thicke, Pharrell Williams and Miley Cyrus, she advises her audience: “Do not take this seriously.” On one hand, she has a point; indeed you might be a little jarred hearing demure Princess Jasmine spouting crude phrases like, “You wanna get nasty? Come on, get at me,” and to that, you can undoubtedly pay no mind. But on the other hand, there’s an important subliminal message breathed into these inane lyrics — and, for that matter, permeated throughout the entire evening — that we should, in fact, despite her warning, take very, very seriously.
“We are living in interesting times,” Salonga says, at an earlier point in the evening, to a sea of unanimous nodding heads. “The thing about interesting times, though, is that it seems to give birth to really great pieces of art.”

And that’s, in so many words, exactly what the evening is. Appropriately titled “Encore,” it’s a complete redux of her last self-titled engagement at intimate supper club Feinstein’s/54 Below — right down to the fiery red pantsuit. Those who saw her at the venue in April 2016 will, therefore, glean no new material, but it’s no matter; she’s in full form with this material, and from the moment she hits her first note, it’s clear why she was asked back to do this show. She’s a master at shaking things up and communicating with flair. In keeping with that very idea, Salonga’s eclectic set list takes us all over the map, with each song differing from its original presentation. Among a plethora of deliciously delectable others, Lennon/McCartney’s “Blackbird” is paired with Kander and Ebb’s “A Quiet Thing,” to emphasize that life’s greatest glories are sometimes celebrated silently; “All of Me,” originally by John Legend, is both stripped down and slowed down, allowing Salonga to wholeheartedly convey her connection to the deeper meaning of the lyrics, and the Gershwin classic, “Nice Work if You Can Get It,” is also (just for fun) turned on its head, infused with a Hawaiin-style ukulele and bluesy piano accompaniment – Her Musical Director/pianist being Jeff Harris, with Jack Cavari on guitar.

In between songs, Salonga delights by just being herself; she’s quirky (“How about we all be honorary Asians tonight?” she quips, following an anecdote), and keeps the atmosphere light and bouncy, peppering the evening with unique personal stories, from an introduction to brother, Gerard, and his “interesting” musical tastes, to her daughter’s recent triumph — and blunder! — on the ice to a recitation of a snarky text from a secret someone she received upon entering her 40s. And you can’t have the OG Kim and Mulan onstage and not give these roles some sort of recognition. Never one to disappoint, Salonga skillfully uses her final number to blast through a mega-medley of her “greatest hits” (cue the phones!!), from that iconic Aladdin anthem to her two signature songs from her separate appearances in Les Miz, and even, a brief look at her most recent turn in Allegiance — all of which are inevitably well-received.
But again, it’s this lingering “Blurred Lines” and the decision to perform it (and a few other surprising gems), that is so central — nay, pivotal — to the scope of the evening. Sure, it’s an absolute left-field choice, but that’s exactly the point: Life is messy, and as Salonga mentioned, we’re living in very uncertain times. The lines are blurred anyway. So, why wait? Go out, revel in the mess, throw caution to the wind, shake things up and don’t worry about what other people think. Present material skewed from its original incarnation. Dive into meaty, off-brand numbers that may not align with the typical fare you’re associated with. Blur the lines further. (What have you got to lose?) You never know what might happen.

Simply put, in just 90 minutes, Salonga effortlessly does all this and more… and the result is so stunningly perfect, there’s nothing left to say but…. encore.

Lea Salonga: Encore continues its record-breaking, 15-performance run at Feinstein’s/54 Below (254 W. 54th Street) through May 22nd. For tickets and more information, visit www.leasalonga.com or www.54below.com.