Lena Hall: “Sin and Salvation” at the Café Carlyle 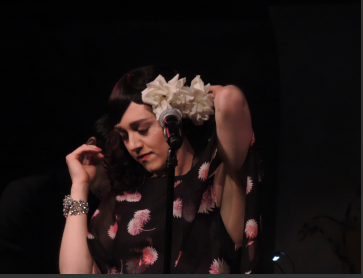 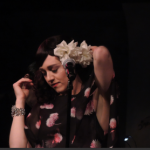 “I’m Lena Hall and I’ll do what I want.” That statement, uttered with a slight laugh by the recent Tony Award-winning actress and singer early on during the opening night at the Café Carlyle of her new show “Sin and Salvation,” proved to be as prophetic as any phrase ever uttered on that tiny little stage.

Given Hall’s newfound fame, earned by her remarkable gender-bending performance as Yitzhak in Broadway’s “Hedwig and the Angry Inch,” the powers-that-be at the Carlyle had given Hall carte blanche, and she used every bit of the credit afforded her. Her 75-minute set broke every rule of the standard cabaret handbook; there was not even one nod to the Great American Songbook nor precious little patter. To some audience members, Hall’s act might be sinful – if not downright heretical – to others, it was more than salvation, it was nirvana.

In fact, it was also Nirvana, as well as Led Zeppelin, Queen, Blind Faith, Talking Heads and many of the other touchstone bands and singers of the past six decades who were represented in some way in Hall’s fearless set.

Blessed with killer pipes, a Joplineseque rasp, and a true commitment to classic rock, Hall found nothing off-limits or seemingly beyond her reach. Would any other singer dare tackle Queen’s gorgeous ballad “Save Me” in lead singer Freddie Mercury’s original key? I doubt it. Would other artists be cowed by tackling Paul McCartney’s “Maybe I’m Amazed,” or James Brown’s “It’s a Man’s World.” Perhaps. But she sang them with precision and fervor.

Hall also clearly got used to singing songs meant for men during “Hedwig’s” run, as evidenced by such selections as Jack White’s “Three Women,” Elton John’s little-known blues-buster “Have Mercy on the Criminal,” and Hozier’s recent mega-hit “Take Me to Church” (in a version that actually surpassed the original). In fact, only three female singers were paid tribute to in Hall’s set: Tori Amos (“God”), Erykah Badu (“Otherside of the Game”) and Janelle Monae (the deliciously tongue-twisting “Tightrope”).

True, perhaps a little more variety in tone might have been in order, and it would have been a pleasure for Hall to reveal a little more about her background, personal life, or even why she chose the songs other than just loving them. But any first-time cabaret outing ain’t easy (to use another song title from the show), and Hall more than just acquitted herself with style, she practically reinvented the genre.