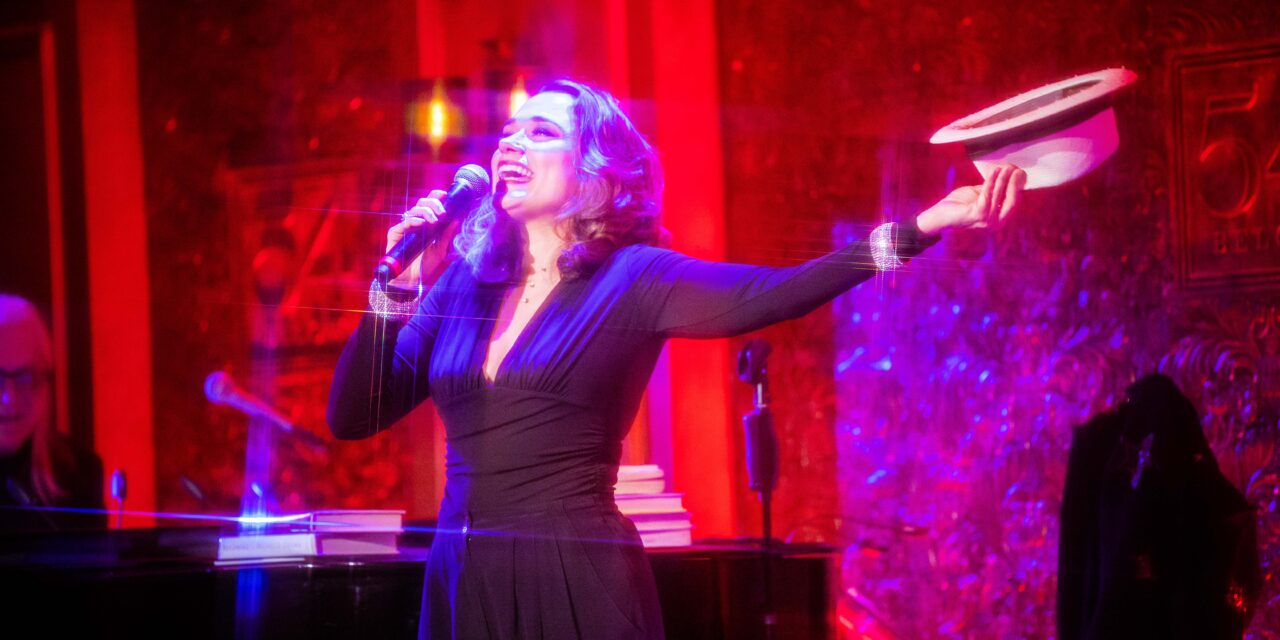 Lianne Marie Dobbs is one of those rare performers who can interpret a ballad with sensitivity and the dramatic ability of a seasoned actor, yet has a voice powerful enough to cause more damage to a venue’s roof than a Florida hurricane.  Ms. Dobbs has everything you want in a star performer:  a great voice, humor, beauty, and, since she touched me, a sparkle, a glow.  This is the third iteration of the show this reviewer has seen since she first performed it at another venue in 2018.  Three years later, Lianne brought her most enticing version to a room more suited to her huge talent – 54 Below.

The star dazzled in a black ensemble of a jacket decorated with purple stars, and sporting a Panama fedora.  She opened strong with a full-throated declaration of female power in a three-song medley based on “I’m a Woman.” The medley acted as an overture to set up her unique premise.  In My Fair Lady, Professor Henry Higgins asks, “Why can’t a woman be more like a man?” Using the first half of that question, Lianne responded using the clever device of a stack of books on the piano.  Pulling from this stack, written by powerful women such as Charlotte Brontë, Betty Friedan, Jane Austen and Michelle, Lianne recited brief passages to introduce each segment of the show.

After telling of her days as a book-crazy high school student in San Francisco, Lianne recited a passage from Jane Eyre.  Her rubato, dramatic start to Sondheim’s “Something’s Coming” gave rise to an increasingly energetic performance, with a big finish that made it clear that this “something” had already arrived.

An excerpt from The Feminine Mystique by Betty Friedan set up Ms. Dobbs’s clever, gender-bending pairing of “She Likes Basketball” (Burt Bacharach/Hal David) with “She Touched Me” (sung by a man in the show Drat! the Cat but a big hit for Barbra Streisand, who did change the pronouns).  It’s quite a difference when a woman sings a song like this about another woman, which would have elicited gasps when the song debuted in 1956.  Today, it wouldn’t even raise an eyebrow.  (As an infamous cigarette jingle once declared, “We’ve come a long way, baby!”)

Asking, “Does my sexiness upset you? Does it?”, Lianne performed a sizzling rhumba of Cole Porter’s “Mind if I Make Love to You” (from High Society), with Amanda Morrill on cajon, melding into the very funny British pop song “In These Shoes.”  Here, Lianne showed off her physical comedy prowess.

A humorous story of reading in bed under the covers in high school (with the help of “bite lights”) led to a lovely “I’m Always Chasing Rainbows,” the oldest song in this show (1918).  Lianne sang it very simply and vocally unadorned, with a sense of sincere passion and yearning.  The number was made even more beautiful by Kendra Jo Brook’s fine violin playing.

The star took it up several notches for the last third of the show.  Lianne read a powerful quote from The Diary of Anne Frank, “In spite of everything I still believe that people are really good at heart,” followed by a gorgeous, appropriately sensitive rendition of “If I Ruled the World” with only Ron Abel on piano.

They say it’s a woman’s prerogative to change her mind.  Channeling the great Pearl Bailey, Lianne sang a slow, finger-snapping blues number, “A Woman’s Prerogative,” in the manner of Peggy Lee’s “Fever.”  By this time, Lianne was making it pretty hot at 54 Below.  She made it even hotter by bringing up performer Luis Villabon for a duet on the “I Like to Lead When I Dance” (from Robin and the Seven Hoods).  The handsome and elegant Villabon, dressed in all black, choregraphed their exquisite dance, the biggest highlight of the evening.

Why Can’t a Woman…? is a well-crafted show, performed with panache by Lianne Marie Dobbs.  Her musical team is excellent, her singing, patter and execution are first rate, and she is a most-appealing performer who ought to be a far bigger star than she is today.  Brava!

Lianne Marie Dobbs: Why Can’t a Woman…? took place on November 16 at 54 Below, 254 West 54th Street, between Eighth Avenue and Broadway (www.54below.com)

Photos by Matt Baker (https://www.mattbaker.photography), except where indicated.