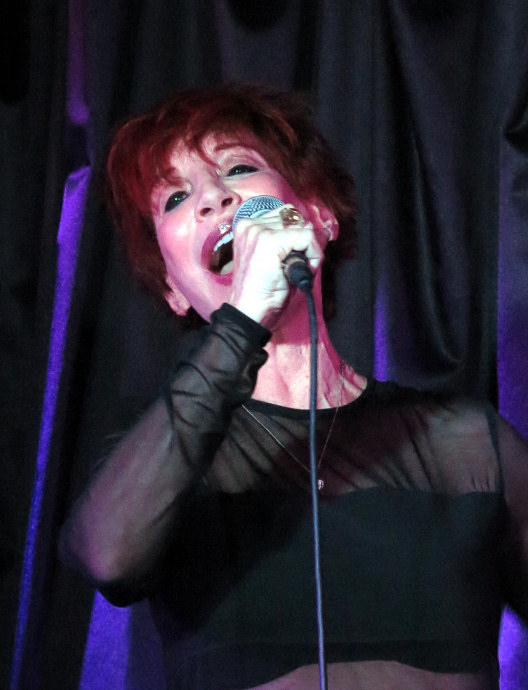 “When we, too, can see ourselves as human, we’ll no longer look at life as a battlefield, but as a classroom where everyone is both teacher and student.”

Pangea is a wonderfully intimate “classroom” to enjoy music, cabaret, and soul.  On June 1, the audience was bewitched and captivated by the likes of one talented woman, Linda Glick.  This native New Yorker has done it all:  top cabaret rooms, the Rainbow Room, playing Nancy Pelosi on TV, gay bath houses, cruise ships and Atlantic City, and the world.   And even regional theater playing Mrs. Brice in Funny Girl (“…though she looks a bit off balance, she poses golden talents…”). Her experience also included being a NYC Junior High School teacher of Spanish and French. It was obvious that teaching and languages were major contributors to the theme of her show which is that “we are both teacher and student in the theater of life…”

So what she assembled and sang with gusto was a repertoire of songs which either 1) supported that theme, 2) spoke to love, loneliness, and loss, or 3) highlighted her obvious joy in singing in Spanish and French. She kicks off with the jazzy classic “Teach Me Tonight” (Gene De Paul, Sammy Cahn). Later on in the show, she cleverly melded Broadway (“You’ve Got to Be Carefully Taught” from South Pacific) with “Teach Your Children Well” by Crosby, Stills and Nash).  She enchanted us with songs by such eclectic artists as Randy Newman, Janis Ian, Cole Porter, and even a lovely song “Kaleidoscope” written by Linda and her pianist Ian Herman.

But where she really revealed her spirit, her inner voice, her poignancy was when she interweaved into the set a number of Spanish and French songs: “Adoro” (Amando Manzero), “Pigalle” (George Ulmer, Guy Luypaerts, Geo Koger, “Nous Nous Reverrons and Un Jour ou L’autre” (Charles Aznavour).  In “Adoro” her timbre was spectacular and haunting.  Singing “Pigalle” we could have been listening to another chanteuse like Edith Piaf. As she sang these particular songs her voice palpably soared, grew and transcended her often-times standard cabaret voice.

Peppered throughout her performance was predictable patter which may have been better served by an additional song or two. She is best at sticking to her role as a performer and singer, and a teacher of what makes us tick.

She had stellar support from Ian Herman at the piano, who suavely supported her with excellent keyboard, consistent with each song she sang.  In “Take It Back” (Kristy Jackson) and several others, he broke in with terrific piano riffs that enhanced the tunes immeasurably.