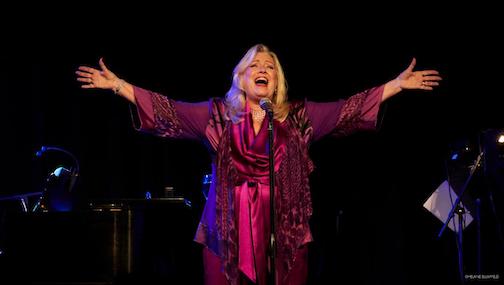 As a fellow reviewer recently pointed out to me, intimacy defines cabaret. The personality, experience, openness of the performer – in short, whether you’d want to get a drink with the performer, and then another – distinguish cabaret from other arts. Like the sommelier, the cabaret artist’s brilliance lies in pairings: pop songs with musical numbers, cowboy ballads with original poetry, cleansing the audience’s palate with personal anecdotes, witty asides, confessions they haven’t otherwise told a soul. You will leave a good cabaret feeling like you’ve made a new friend. You feel that way after Linda Kahn’s debut cabaret Say Yes!.

Kahn opened her cabaret on November 12th with a powerful song pairing – the titles alone might as well be her manifesto – “Don’t Rain on my Parade” with “I Want It All.” Swinging from sultry ballads and story songs to inspiring solos like “Just a Housewife,” Kahn glides through her night, movingly describing her victorious battle with cancer; her marriage, how it’s remained strong; her daughter’s coming-out story; the singer’s relationship to her accompanist – like a second marriage; and much more.

While ‘Serious Fun’ might be an alternate title for her show, Say Yes! summarizes what Kahn wants us to take from her night onstage. “We make 35,000 choices every day,” she asks, “how many do I say yes to? And yes, there are people who measure these things.” ‘Yes’, a small, powerful word, can take you quite a long way it turns out. Kahn stopped performing years ago, for good reasons. She got married, adopted a daughter, raised a family, but the theater – as it has been known to do – called her back. Her cabaret resounds as her ultimate ‘yes.’

Kahn sings two duets, one with her impeccable pianist and musical director, Christopher Denny, who wrote “Anywhere With You,” a song that works as a love letter to a person and to Paris, and Jay Leonhart, a remarkable bassist who strums, slaps, and sings with equal verve.

A night everyone was glad they had said ‘yes’ to, and one, given the opportunity, we’d respond the same with even more enthusiasm.