Little Amal Walks NYC: A Walk Unlike Any Other Walk 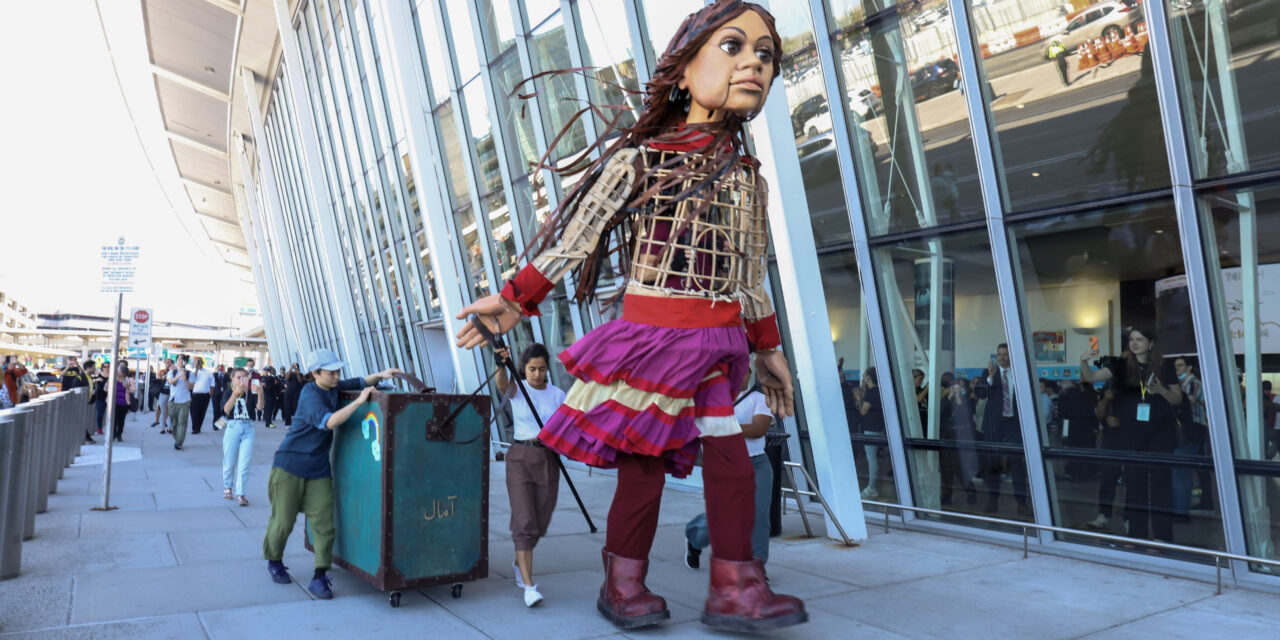 This past Thursday, September 14, a ten-year-old girl stood on the steps of the New York Public Library, surrounded by hundreds of admirers.  Butterflies floated around her, along with flowers and brightly colored ribbons.  Flying books, their pages fluttering like birds, circled over her head– with titles like Little Women and The Giving Tree, chosen by the Library just for her.   There were cheers and tears as the girl spontaneously hugged other children in the throng.  Then came joyous laughter, as she embraced one of the huge stone lion statues in front of the Library.

Were we dreaming, those of us in that spellbound throng who witnessed such a miracle?  No, we weren’t.  You had to be there to believe it.  Because this was no ordinary little girl – her name is Little Amal, she is a 12- foot-tall puppet, and she is manipulated by 3 professional puppeteers, who walked her all the way from Grand Central Station to the Library steps, through crowds of stunned pedestrians.  Cars honked as she crossed Fifth Avenue to make her grand entrance (aided by production staffers who flew the books and butterflies around her attached to huge extension poles and blew scores of sparkling bubbles in the air).

Who is Amal?  She’s a Syrian refugee, representing children separated from their families during the recent refugee crisis in the Middle East that sent millions pouring into Europe.  The inspiration of The Walk Productions (a British company) in partnership with Handspring Puppet Company (of War Horse fame), Amal’s journey began in July 2021 in Gazientep, Turkey, just over the Syrian border, where she embarked on a 6,000 mile symbolic “walk”  (the route of so many refugees) through eight countries lasting four months and ending in Manchester, England, a center for Syrian refugees where Amal hoped to find her mother.  Of the 170 events scheduled along the way, highlights included visiting a refugee camp on a Greek island, shaking hands with the Pope in Rome (he could only grasp one of her fingers), and celebrating her tenth birthday in London’s Victoria & Albert Museum.

And now Amal has arrived in New York City, where – between September 14 and October 2 – she will be welcomed at 55 events organized by The Walk Productions in partnership with St. Ann’s Warehouse, again in association with Handspring Puppet Company. as she walks across the five boroughs of New York City.  The event is called Little Amal Walks NYC.  On this occasion, Little Amal is here to find her uncle Tamir.

On Saturday, September 17, we followed her from Central Park West and Columbus Circle across 62nd Street to Lincoln Center Plaza, where a New Orleans-style brass band accompanied her, playing “When the Saints Go Marching In.”   There on the balcony of the Metropolitan Opera House, yet another brass band heralded her arrival, before whom she bowed with gratitude.  As she circled around the Plaza, Amal stopped to wave and shake the hands of cheering admirers or embrace a flock of awe-struck children.  Next, we followed her from the Plaza to Central Park West, where we turned north (supervised by the NYPD) and marched to 79th Street and the Museum of Natural History.

In the following days, Little Amal’s next stops in Manhattan will include St. Patrick’s Cathedral, Central Park, and Washington Heights.  In Brooklyn, she’ll walk the Coney Island Boardwalk, visit the Brooklyn Public Library and St. Ann’s Warehouse, a co-producer of her visit.  In Queens, she’ll dance in a community garden and join drummers in Jackson Heights. Then she’ll return to Manhattan to visit Harlem and Chinatown and meet families of the victims of 9/11.  She’ll ride the ferry to Staten Island.  At all of these sites, she’ll be greeted by local musical, dance, and choral groups.

As for the astonishing artistry that created her, Little Amal (meaning “hope” in Arabic) is a product of the brilliant team that created the War Horse puppets.  Amal measures a spectacular 12 feet tall (3.5 meters).  Her exoskeleton consists of a cane body and carbon fiber head.  Her hair is made of ribbons, and her upper body and arms are constructed with bamboo canes.  She walks with the aid of professional puppeteers working in teams (recruited from Italy, South Africa, Eritrea, Syria, Palestine, the U.K., the U.S. and Japan.).  One puppeteer is lodged inside Amal’s body on stilts and can view her immediate surroundings through her rib cage.  Two others guide each of her arms and hands.  Her eyes move, and her expressive face responds to the crowd with smiles and blinking eyes.   She is an utter marvel to behold.

I spoke with some of miracle workers who are bringing Amal to life here, including puppeteers Sebastian Charles, Ben Thompson, and Nicole Baker.  “It’s about finding the moments for Amal and responding,” says Charles modestly, describing their challenging work.  Therein lies the miracle of Amal, whose operators must react spontaneously to the crowds that surround her.  Indeed, the crowds themselves become part of the performance -like the one that accompanied Little Amal from Central Park to Lincoln Plaza, where it grew in number from dozens to almost a thousand.   When Amal danced on Central Park West on her way to the Museum of Natural History to the tune of accompanying bands, so did we all.   It’s a spontaneous, exuberant, joyous audience response unlike any I’ve experienced before.

There were also words from David Lan, the visionary creator of The Walk, whose purpose is to call attention to the world-wide refugee crisis.  The Walk seeks to inspire an embrace, an acceptance, and a shared humanity wherever Little Amal goes.  Under Lan’s direction, the organization of Amal’s three- week walk in New York (as in the European walk) has been meticulous, involving a large production staff and many local groups (in coordination with the police department, to provide Little Amal with safe passage through the streets of New York, followed by ever-growing crowds).  Lan spoke of public reaction to Little Amal in New York thus far: “The response here is so warm and deep.  It’s what we expected in a city founded by refugees.”

What do we call Little Amal?  Street theatre?  Immersive theatre?  A happening?  None of these seems worthy of its vision, impact or artistry.  It’s live theatre unlike any other –unique, immediate, magnetic, enthralling, unpredictable, and unforgettable.  Whatever you call this new theatrical experience, it will inspire you, transport you, and change you.  And when Little Amal waves at you, believe me, you’ll find yourself waving back.

You will remember her. All 55 events HERE