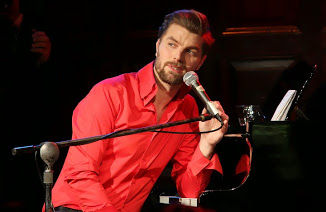 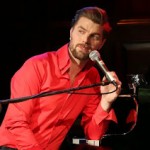 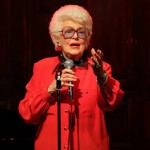 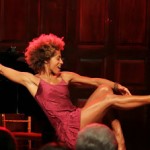 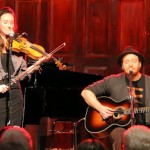 “Live From Gramercy Park” is a musical series at the Players Club presented by Michael Barra, Christian Campbell, and Lance Horne. In honor of Valentine’s Day, the theme for February 9 was “Love” and after greetings from Campbell, Horne, a gifted and awarded composer-lyricist in a bright red shirt, took his place at the piano, and played a wonderful instrumental.

Horne told us his first job in New York City was as an apprentice to producer Hal Prince. He said it was his honor to present the first guest who had appeared in three Prince productions. It was the great Marti Stevens whom I had not seen in a cabaret setting since a wonderful show she did at the old Russian Tea Room cabaret. Stevens is a master of what we call mash up now, but she has an amazing way of doing medleys of similar themed songs and she did not disappoint this evening. In red boa and a silver encrusted black pants suit, Stevens brought on stage Tedd Firth, and put together “Let’s Face the Music and Dance,“ Gershwins’ “Shall We Dance,” “It Only Happens When I Dance with You,” and then did a Cole Porter medley which included “I Get A Kick Out of You,”  and “Make It Another Old Fashioned Please.” Her last brilliant trio included “My Time of Day,” and “Street of Dreams.”

Stevens was a hard act to follow but Lauren Elder (“Side Show,” “Hair” in London) came on stage with a stringed instrument and sang a song she wrote about her mother, accompanied by another “Hair” cast mate, Allison Gunn (who sang the “Mother” lyrics). Elder was very touching in her presentation.

Karine Plantadit, an extraordinary dancer from “Moving Out” and “Come Fly Away,” gave a speech about what it took to be a dedicated artist, the most important thing being “Love.” She proceeded to do a bizarre physical dance, contorting all over the stage including cartwheels, handstands, and stunning body movement.

After intermission, Elizabeth A. Davis from “Once” with David Abeles, sang a sweet folk song and brought up another “Once” performer, Anne L. Nathan, and the three of them did a harmonic song.

The desired feel for “Live From Gramercy Park” is to create the experience of an artists salon more than presenting a polished variety/cabaret show which allows them to do wonderful improvisation.

The last group on the bill was three Julliard students who are already touring and have a CD coming out. The brilliant pianist leader was composer Samora Abayomi Pinderhughes, who moved his body on the piano bench perpetually to the melodies he played, mouthed the lyrics and sometimes harmonized with the singer. It was a delight to see his body so wired to the music! The lead singer was Jehbreal Muhammed Jackson, who read poetry as intro to some of his songs. On every song his diction was extraordinary and his phrasing perfection, going from softness to belting and back to whispering without a break! The third member of the trio was Riley Mulherker on trumpet. Pinderhughes began a beautiful rendition of the verse to “Stardust” and Mulherker started an astounding improvisation solo on the trumpet, with unbelievable breath control, and brought cheers from the sophisticated crowd. (When I asked him afterward what kind of diaphragm he had to do this, he told me he used deep sea diving techniques!) There was a standing ovation. After three more numbers, the crowd would not let the trio go until they did an encore. The group has a CD coming out in April and I can’t wait.