Liza and Alan Together at Town Hall 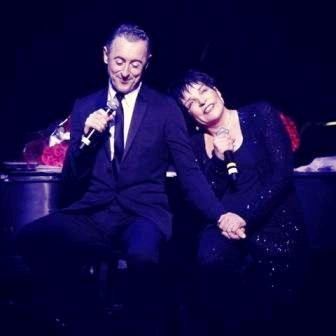 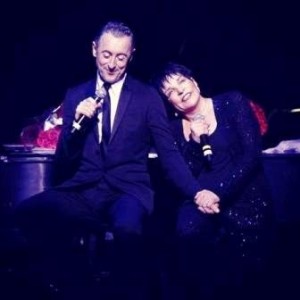 Town Hall was packed to the rafters with fans and the roars began even before the hypnotic and spell-binding Liza (with a “Z”) came out on stage. Yes, I know that the evening was a duality of talent and, yes, Alan Cumming is a great talent. But, let’s be honest. He hasn’t been around as long as Liza, nor developed the overwhelming cache that has made her a legend. But I do believe he’s on his way!
Opening together with “Nowadays” and bantering about the lack of class, they segued seamlessly into “Whatever Happened to Class?” (that’s what I keep asking).

It was now time for Liza to re-enter bedecked in black sequin pants suit, with a long red scarf. And the audience roared – – again! She delighted with “Liza with a “Z.” She has that certain electric energy of emotions that engulf her admirers. Giving them what they want, she sang them all – – “And the World Goes Round,” a very humorous “Ring Them Bells (accessorized with big eye glasses) and “Maybe This Time.” Yes, each song brought its own standing ovation from a cheering audience.

Then it was time to double the pleasure, double the fun as Alan re-entered and the world of Kander & Ebb’s Cabaret came alive with “Wilkommen,” Mein Herr,” “Money” and “Cabaret.”

If I haven’t mentioned, this was a birthday concert to celebrate Liza’s 67th, as everyone chimed in singing, while Liza insisted “I’m 12.” The pairing of these two great talents left the audience breathless, wanting more. Oh, what a night!