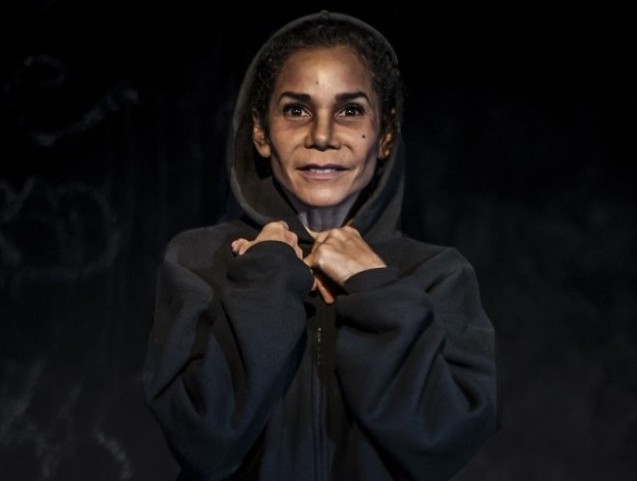 One of the great things about a play with a universally robust theme or storyline is its malleability, its ability to be twisted and re-told in countless ways. This is clearly the main reason for Shakespeare’s endurance, and it applies just as nicely to the serialized mid-19th century James Malcolm Rymer story, The String of Pearls (which led to numerous adaptations, the best known of which is the Sondheim/Wheeler musical, Sweeny Todd, the Demon Barber of Fleet Street). Empanada Loca (presented by Labyrinth Theater Company through November 8 at the Bank Street Theater) is a recognizable, though very different telling of that horrifying tale, but one that’s as delightful and intriguing as any of the better known versions, and that’s thanks to both Aaron Mark’s terrific writing (he also directs) and an absolutely stellar Daphne Rubin-Vega performance.

Empanada Loca differs most significantly from better known versions of the story by the likeability and empathy-inducing personality of its protagonist, Dolores (Rubin-Vega). We meet her deep underground, living in an abandoned tunnel several levels below the New York City subway system and even below the homesteads of the “mole people” (a society of underground dwellers whose existence is the hotly debated stuff of urban legend). Speaking directly to someone who has invaded her space (“a cop” she worries initially), she eventually engages directly with them (or us, the audience) and begins to talk the talk of a lonely soul. 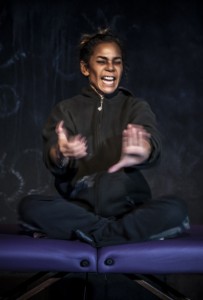 Rubin-Vega draws us in immediately. She’s intense and impactful, recounting her unfortunate youth in which, at the age of nine, her mother, a cop, is killed on the job. Even here, you can feel her pain. But, young Dolores seems full of promise, with plans of being a civil engineer and enrolling at Hunter College. But she’s waylaid, first by the death of her loving, but alcoholic father, then by an unexpected love affair with a charismatic drug dealer, Dominic, in Washington Heights. She becomes his lover and begins selling marijuana for him, until the inevitable bust. Dolores is sentenced to 13 years and Dominic disappears, never riding in on a white horse to rescue her (despite her having protected him), shattering both her heart and, seemingly, her psyche. That’s all prologue, however, and Dolores is more engaged with the immediate, very recent past, following her release from prison. She has returned to Washington Heights and the only remnant of the radically gentrified neighborhood is the empanada restaurant she used to frequent. It’s now run by the deceased owner’s pot-smoking son, Luis, and his sole employee, a 16-year-old transgender female who lives upstairs. Luis had always been enamored of Dolores and immediately invites her to live in his father’s old room downstairs. He feeds and dotes on her, even helping her to set up a massage business.

But gentrification has creeped into their world, too, and the new landlord wants to evict Luis and the empanada shop. In the midst of the chaos, Dolores finds herself giving the landlord a massage, and impulsively uses the opportunity to strangle him. Rather than turn her in, Luis, takes charge and sends Dolores away from the crime scene. Riding the train she realizes, “It feels good to know what I want. It feels good to be in fucking control for once.” And when she returns, everything has changed. The landlord’s body is gone and the next day Luis has created a new, very popular empanada, the Muy Loco, and guess what kind of meat’s in it? Let’s just say the new menu is a capital improvement.

As one might expect, one murder leads to more, and despite her culinary collaborations with Luis, Dolores’s world begins to spiral out of control, leading to its explosive end.

Leaving the theater at the end of Empanada Loca, one feels emotionally drained. The experience of sitting in the dark theater (a very immersive scenic, sound and lighting presentation by David Meyer, Ryan Rumery and Bradley King, respectively) listening to Rubin-Vega tell Dolores’ story is so alarmingly authentic that it takes quite some time to shake off the false notion that this horrible story really took place. Rubin-Vega’s on-the-money Washington Heights patois is overwhelmingly convincing as is her body language; she captures the tones and ticks of a charming, yet deranged person, one we’ve all had brief encounters with from time to time, especially in New York City. But more than anything else, it’s the fact that Dolores is so likeable and vulnerable, especially when we first get to know her. So much so that it’s heartbreaking to watch her unravel and reveal her demonic inner nature. It’s a window into a life that took terrible turn after terrible turn, only to be beaten further down by a system designed to repress the less fortunate. It’s only after some time, and realizing that none of what we heard actually took place (Rubin-Vega is that convincing) that we can breathe a sigh of relief and marvel at what an utterly fantastic tale we’ve been told. 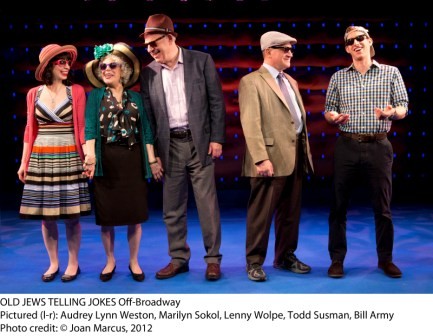 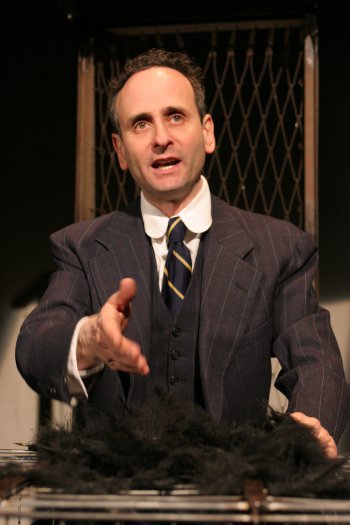