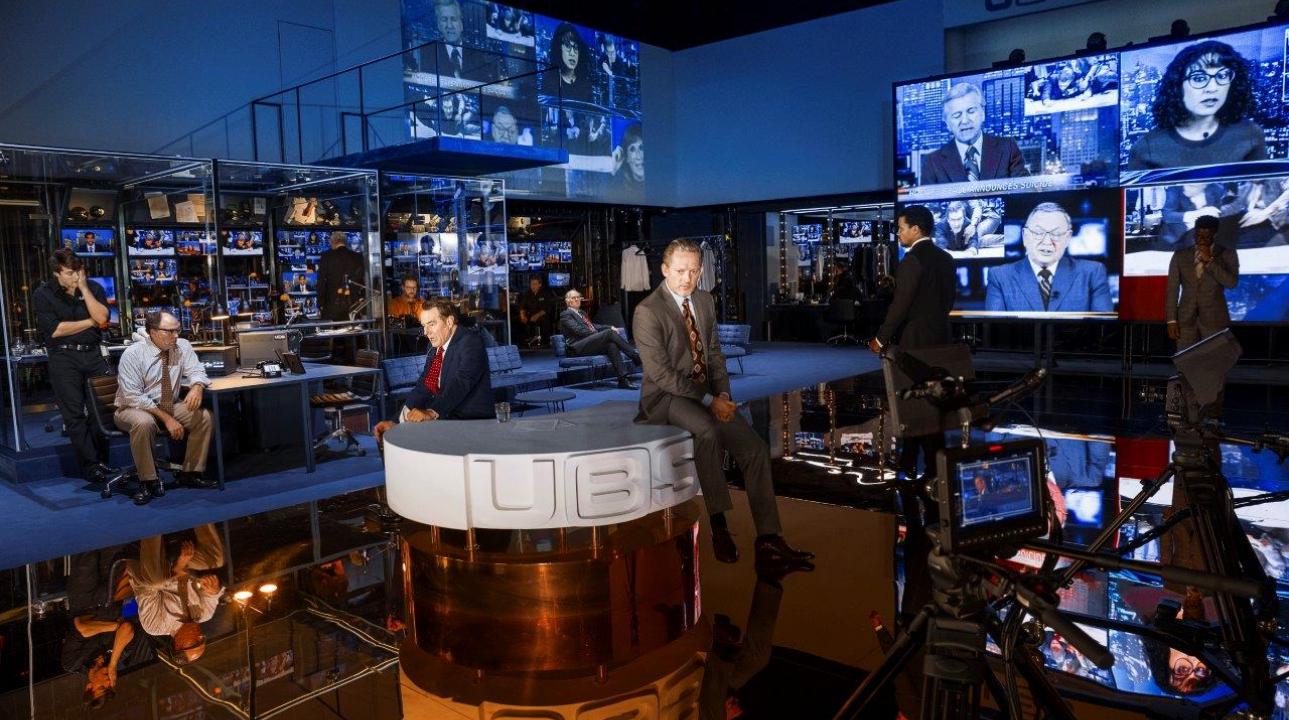 1 – Network at the Royal National Theatre

You remember that famous cry from Network, Paddy Chayevsky’s 1976 film about the power of television – don’t you?  Well, it’s ringing out again – this time from the Royal National Theatre, where director Ivo Van Hove has hurled his latest theatrical thunderbolt.   In Lee Hall’s stage adaptation of that provocative film, the cry couldn’t be more piercing or prophetic.

It’s being uttered by Howard Beale, a newscaster who has threatened to kill himself on air and who holds his viewers hostage while he rants and raves, night after night.  Will he or won’t he? The public watches, riveted, while the network’s ratings soar.

As played by a belligerent Bryan Cranston (of Breaking Badfame), Beale is a magnetic presence.  Van Hove and his designer, Jan Versweyveld, have turned the entire Lyttleton stage into a studio where Beale’s nightly outbursts are broadcast.  Producers (Michelle Dockery and Douglas Henshall) and technicians swarm around the stage, simulating the mayhem of live television production.

Cranston is onstage for two hours non-stop.   Whether he’s being prepped by make-up artists or on-the-air, his presence is projected onto a huge screen hanging above the stage. “A latter day angry prophet denouncing the hypocrisies of our time!” his producer exclaims.  “It’s show business!”

Forty years after the film, the play’s message rings out more urgently than ever, as we sit before our televisions, watching an ugly political reality TV show unfolding, wherein we’re the captive audience. “We just tell you what you want to hear,” Cranston explains.”  You feel what the tube tells you, you do what the tube tells you.  You are the real thing, we are the illusion.”  This Network is a nightmarish prophesy come true.

The Girl from the North Country

No one tells a tale like Conor McPherson.  And no one writes a song like Bob Dylan.  Put them together and you have Girl from the North Country, a haunting tale of the American Depression. It’s an evocative piece, burnished with the haze of the past.

Imagine Our Town set in Duluth Minnesota, c. 1934.   A motley assortment of struggling souls are gathered in Nick’s guesthouse, all facing a future that holds no promise. Nick is in debt, his wife Elizabeth has dementia, and his unemployed son doesn’t improve matters.  There’s also Nick’s adopted, pregnant, unmarried (black) daughter. Other guests include a black boxer, a crooked preacher, and a father with an autistic son.   With nineteen cast members and three on-stage musicians, the play achieves the epic scale of an instant classic.

The playwright  (who also directs) chose twenty Dylan songs from his vast oeuvre– including gospel, country western, and folk – to express the longing of these lost souls, crushed by poverty and dashed dreams.  Memorable performances include Ciaran Hinds is stoical as Nick, and Shirley Henderson, his demented wife, singing Dylan’s songs with an uncommon power.

Rae Smith’s set features backdrops of a moody Minnesota landscape.  There’s a narrator (Dr. Walker), whose heartbreaking epilogue offers only a glimmer of hope for the few who survived the Great Depression. 3 – Everybody’s Talking About Jamie at the Apollo Theatre

When’s the last time you shed tears of joy in the theatre?  The story of Jamie, a teenager from a working class town in the North of England who wants to be a drag queen, will have you laughing, crying, and cheering simultaneously.

The context of the play is a familiar one – a local high school where a teen struggles to fit in.  But Jamie (as played by the amazing John McCrea) has neither anger nor angst. He’s known from childhood that he’s different, preferring girls’ clothes to boys.  Fortified by the support of his mother (Josie Walker) and best friend (Lucie Shorthouse) he pursues his dream – to wear a dress to the prom. It’s a moving journey, and Jamie’s ultimate triumph is shared by the audience as if it were our own.

The performances are transporting.  As Jamie, McCrea is marvelous, and when he dons his red high heels and dances, he’s a moving exclamation mark, towering over his classmates. As his mother, Josie delivers a show-stopping song, “He’s My Boy,” among others.   Jonathan Butterell directs an exuberant young ensemble, singing and dancing their hearts out to Dan Gillespie Sells and Tom Macrae’s lively, tuneful, pop/funk score.

Jamie’s journey isn’t an angry one – and that’s its strength.  On the contrary, it’s fresh and contemporary – a celebration of acceptance and belonging that is emblematic of a new age of inclusion.

Network, adapted from the film by Lee Hall, directed by Ivo Van Hove, at the Royal National Theatre; Girl from the North Country, book and direction by Conor McPherson, music by Bob Dylan, at the Noel Coward Theatre; Everybody’s Talking about Jamie, directed by Jonathan Butterell,  by Dan Gillespie Sells and Tom Macrae, at the Apollo.