Lorna Luft – The Joy of Spring 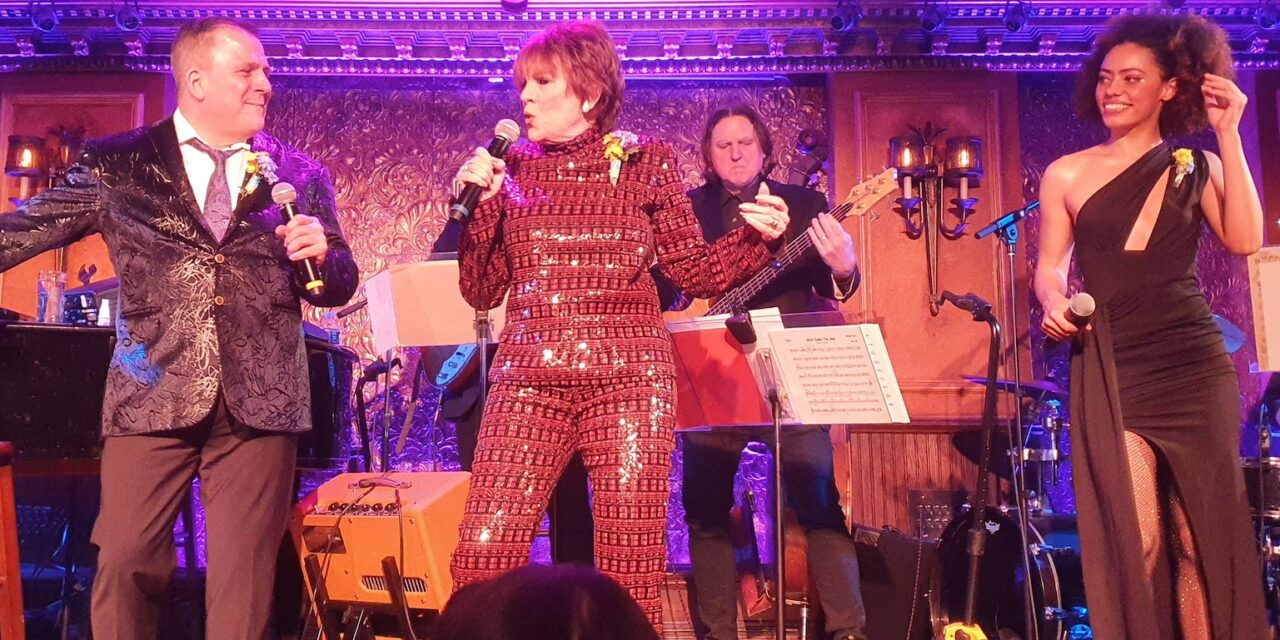 Lorna Luft is a survivor. She survived losing her mother, Judy Garland, as a teenager (never mind the burdens of being an iconic celebrity’s daughter) and eventually found her own show biz success. More recently, she beat breast cancer and a brain tumor, the treatments for which took quite a physical toll, especially where it counts for a performer: the vocal cords. Lorna’s once lovely voice is now rough, her vibrato wide. It took learning new techniques to regain some of her singing ability, working relentlessly to find her voice again. This is mostly public knowledge, but you won’t hear Lorna complain. In fact, she doesn’t mention any of it. Lorna Luft doesn’t need or want your sympathy. That’s because, above all, she is a trooper, a performer who’ll sing ‘til her final breath: “The show must go on.” Armed with a boatload of stories, using performing skills built up over a lifetime, and accompanied by terrific musicians and singers who could help carry her load, the star presented a fun and unusual 75 minutes of solid entertainment.

The three-night run at Feinstein’s/54 Below officially had her usual musical director, husband Colin Freeman—who is working in the Harmony show at the Yiddish Folksbiene Theater—replaced by Mark Hartman. Drummer Joshua Tree received the blessed news that his wife had a baby just hours before tonight’s show, so Adam Wolfe stepped up, learning his parts “in about 20 minutes.” Freeman was off from Harmony tonight, so he took over for the evening as something of a calming presence for his wife and to feed cues to Wolfe.

Ms. Luft avoided the clichéd spring songs you might expect right now (like “Spring is Here,” “Spring Will Be a Little Late This Year,” and so on). Instead, she turned primarily to pop songs of her formative years in the 1960s. A huge Beatles fan, particularly of George Harrison, she opened her set with Harrison’s “Here Comes the Sun.” In fact, on the night the Beatles exploded onto the American scene on The Ed Sullivan Show (February 9, 1964), a concert episode of “The Judy Garland Show” aired following Sullivan, where she introduced “Song for Lorna.”

Ms. Luft sang a poignant “Here, There and Everywhere,” another Beatles’ song (John Lennon/Paul McCartney), with only her husband’s loving piano accompaniment. It was quite lovely.

When Ms. Luft met one of her favorite songwriters, the late Ellie Greenwich, at a Debbie Harry recording session, they hit it off, and Greenwich invited her to lunch. She’d been playing it coy, but finally asked Greenwich, “Phil Spector. Spill it!” Greenwich replied, “Your mom. Spill it!” A great friendship was born, and Ms. Luft honored her tonight with a set of songs written by Greenwich, along with Jeff Barry and Phil Spector.

Here, Ms. Luft gave star turns to her two backup singers. Justice!, in a sexy, revealing outfit, sang “And Then He Kissed Me.” Sabella’s song, “The Boy I’m Going to Marry,” was arranged by Mark Hartman for Sabella to sing as a gay-marriage anthem. Sabella, who headlined here last month, is a terrific singer and a singing coach. He has been instrumental in Ms. Luft’s vocal recovery. Singing with great tenderness and love, this was a “goosebumps” moment.

The Ellie Greenwich segment concluded with “Chapel of Love,” and Ms. Luft had the audience join in. In a cabaret room full of established and rising cabaret stars singing along, the sound was amazing.

The finale was “Not Even Nominated,” a strong piece about the many songs that never got nominated for an Oscar or Grammy. It brilliantly combined dozens of pieces of songs in multiple styles. The opening vamp of Kander and Ebb’s “Theme from New York, New York” provided an oblique reference to her superstar sister, Liza Minnelli. “It was never nominated, but some relative of mine keeps singing it!”

Some of Ms. Luft’s patter mirrored what she told this writer in our recent interview for Theater Pizzazz, which can be read here.

Lorna Luft provides a solid evening of entertainment. She still brings much to the table, despite the ravages of life-saving treatment on her voice, in the form of fascinating life stories, a good song selection, and top-notch musicians. She has long been a star in her own right, even if being Judy Garland’s daughter is part of her draw. Her heroic fight to regain even a semblance of her gifts is part of her story, and her willingness to bare herself like this is beautiful.

Lorna Luft: The Joy of Spring was performed March 31 – April 2 at Feinstein’s/54 Below (254 West 54th Street, between Broadway and Eighth Avenue). www.54Below.com