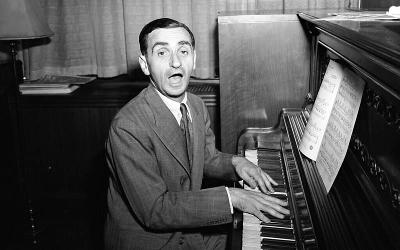 Streamed live through the aegis of 92 Street Y.

Composer George Gershwin called him “the greatest songwriter that has ever lived.” According to composer Jerome Kern, “Irving Berlin has no place in American music—he is American music.”

Irving Berlin, (born Israel Isidore Beilin 1888-1989), arrived at Ellis Island from Russia, age 5. “He was part of that first wave of intense immigration from Eastern Europe. The Beilins settled on the Lower East Side. At 8, he started to help supporting his struggling family (selling newspapers). At 14, he left both school and home, living in flophouses” in hopes of removing at least one burden.

Berlin was surrounded by the music of émigrés. He had an ear for melody, an appealing voice, and a sense of simple truth. “As singing waiter at The Pelham Restaurant, he learned to take a popular tune and make up his own lyrics for larger tips.” He busked, plugged songs, and performed in saloons.

In 1909, we’re told, Berlin wrote the jaunty “Spring Song” to music by Mendelssohn. Love me to that ever lovin’ spring song melody…that tantalizing, hypnotizing, Mendelssohn melody… The first of many songs host Louis Rosen plays for us is a recording by mezzo soprano Joan Morris and her pianist husband, William Bolcomb, who performed material as we might’ve heard it then.

Rosen chooses to expose us to as true a rendition as can be found rather than those that came later and might be more familiar. A musician/songwriter himself, he understands the difference in the way these will “land.” We listen to songs and later watch excerpts from films, leaving a rich impression of both origin and longevity of the work. 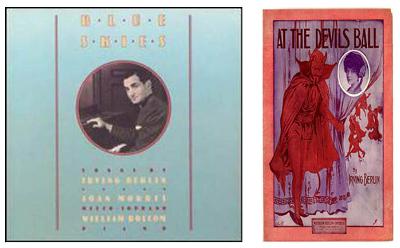 “Berlin is at the forefront of a generation that changed popular song. One of the ways he did that is language, syntax, the vocabulary of ordinary people. His favorite songwriter was Stephen Foster.” Jerome Kern said Berlin’s best-known songs “seem indivisible from the country’s history and self-image.” Before him, we’re told, songs were often sentimental, stilted, contrived. “After the Ball” is a prime example. Two years later, his first big hit was “Alexander’s Ragtime Band” of which he sold over a million copies of sheet music- in 1911.

“Actually more of a march than a rag, it’s nonetheless syncopated, capturing the spirit of ragtime, bringing white legitimacy to the genre.” (Rag was looked down upon.) The song became a cylinder success (the earliest commercial medium for recording) with the version we hear by Arthur Collins and Byron G. Harlan, a bouncy, call/response. “These days, we want to hear a song by a particular singer. Back then, if you went to buy a recording, you’d take whatever was available.”

The songwriter tended to work at night and said he’d get through about 5 new songs each session, not relying on inspiration. “He kept his ear to the ground, writing for dance crazes. When the turkey trot came out, Berlin wrote “Everybody’s Doin’ It.”  We hear a snippet. There were songs for the foxtrot, grizzly bear and chicken walk. By the early nineteen teens, he was earning $100,000 a year. According to an inflation calendar, that equates to $2,607,222.22 in 2020.

Berlin fell in love with and married Dorothy Goetz after a whirlwind courtship. On their honeymoon in Cuba, his bride contracted Typhoid Fever. She died only months after returning to New York, leaving the songwriter a widower at 23. “The tragic event starts to influence Berlin’s music. It deepens the content of his writing.”

In 1918, at 30 years old, Berlin was drafted into the US Army. One newspaper headline read: “Army Takes Berlin!” Serving at Camp Upton in Yaphank, New York, the corporal produced a musical revue performed by soldiers called “Yip Yip Yaphank.” Two familiar songs came from the show, the clearly autobiographical “Oh, How I Hate to Get Up in the Morning” and “God Bless America.” “Berlin makes lyrics seem effortless, absolutely natural, but he doesn’t wear his cleverness as if showing off.” (In WWII, Berlin’s production This is The Army toured military bases all over the world. It was the first integrated division army unit in the U.S.) 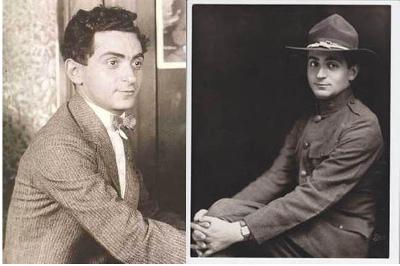 When he was demobilized, Berlin dissolved an earlier publishing partnership and opened his own company. Attention to business was acute. “He used to go to music stores, find his songs, and check the sheet music for dust. If there was a lot, he knew they weren’t selling,” Rosen tells us. With Sam Harris, he then purchased The Music Box Theater and began to write annual revues.

An audience member (we can visually raise hands) inquires how Berlin fleshed out his music with next to no technical background. Apparently he had a transposing piano with a lever under the keyboard that shifted notes. Rosen compares it to using a capo on a guitar. (A device that clamps down across the guitar’s fingerboard at a particular fret causing higher pitches to issue.) “He also had a musical secretary who’d help him clarify harmony and chordal support. Berlin would sing and describe what he wanted which was very clear in his mind. ” (He learned to read and write music in the 1920s)

Today’s subject co-owned a theater, wrote a show every year, and continued his success as a publisher. To make his life complete, he met and fell in love with heiress Ellin McKay. This didn’t sit well with her Anti-Semitic father who sent the young woman away hoping she’d forget her suitor. Her absence inspired “What’ll I Do?”: What’ll I do/when you/are far away/and I’m so blue?/What’ll I do?… which was a hit for Paul Whiteman. We hear two interpretations. The first is a lilting Morris/Bolcomb version, the second Bob Dylan from his recent release of standards “…which suggests the durability of these songs.” Dylan’s is kind of a soft rasp. “He’s a bit ragged and thoroughly committed,” Rosen comments appreciatively.

The ballad “Remember” was also written during their separation. “Both are waltzes, not songs that build on the syncopation of American music. In the 1929 crash, Berlin loses a great deal, but not all of his money. Conversely, his father-in-law went broke. It must’ve been satisfying to write McKay a check.” 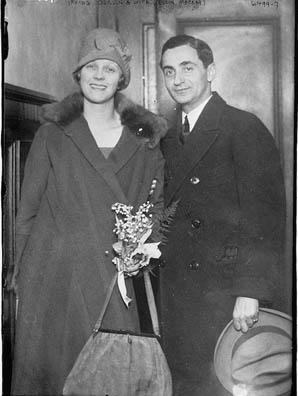 There followed a couple of fallow years during which his background might’ve heightened insecurity and depression, Rosen conjectures. “He was fundamentally a songwriter, not working made him unhappy. Broadway was in trouble in the 1930s. Hollywood was buying up Tin Pan Alley publishers.” Berlin didn’t sell his company, but thought it time to give the Movie Mecca a second chance. (An earlier attempt was unsuccessful.)

“On the brink of failure, RKO put together two performers who’d caused a stir with brief appearance in Flying Down to Rio. Berlin signed to write Top Hat, starring Fred Astaire and Ginger Rogers which both launched them as serial partners and saved RKO.” Having just started a solo career apart from his sister, Adele, however, Astaire might’ve wondered at the timing. The writer earned an unheard of $100,000 plus a percentage of profits.

“What Berlin started to do with the medium is not just write hits, but advance the plot.” We watch clips from the film. The first, “No Strings” “… fills in Astaire’s character and facilitates his introduction to Ginger Rogers.” Rosen calls the second, “Cheek to Cheek,” one of the most beautiful songs ever written. Attending one of the Rosen’s classes, Berlin’s granddaughter recalled he told her “Movies are just about plugging songs.”

“For the persona Astaire presented, Berlin might not have been a logical choice, but more songs known as standards were written for Astaire than anyone else,” Rosen comments moving to the piano. He plays and sings “Cheek to Cheek” showing us how the chord under “speak” leaves one in mid-air. “Except for that minor chord, you’re in key until Dance with me…This is also a song that got a great plug because it becomes an extended dance number.” An obvious fan of Astaire, Rosen watches with us.

Berlin and Astaire developed a deep friendship. In his recent biography, Irving Berlin, New York Genius, author James Kaplan notes “Each had a mocking sense of humor, a total devotion to wife, and a keen sense of sartorial style; both were out and out perfectionists when it came to work.” 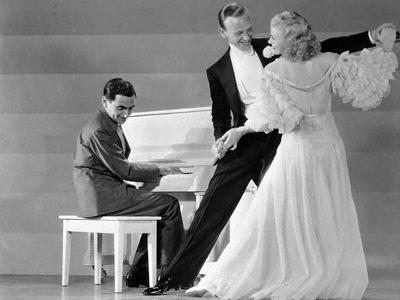 Capitalizing on the moment, Berlin then wrote Follow the Fleet. We watch a satin-sailor-suited Rogers sing “Let Yourself Go,” which Rosen points out starts like a Yiddish melody then segues into American popular song. “Astaire was a terrific musician, a great drummer and an excellent stride pianist,” he notes introducing “I’m Putting All My Eggs in One Basket.” Familiar with the oeuvre as I am, I didn’t remember the performer playing piano.  He is, in fact, very fine. Rosen is captivated. The song is then repeated in an imaginative duet. Our host’s grin is infectious. “And THAT is a good plug.”

When Jerome Kern became ill, Berlin authored both music and lyrics for Annie Get Your Gun. (This shut out lyricist Dorothy Fields whose original idea it had been.) The disappointing Miss Liberty and excellent Call Me Madam followed. At 74, he wrote Mr. President. In his 80s, he became a recluse at the Beekman Place apartment he and Ellin shared. “From everything I’ve heard his last years were difficult and depressive.” Berlin died at 101 years old. His music lives on. We alas, never got to the holiday songs or… ‘could’ve used another hour.

All unattributed quotes are Louis Rosen. 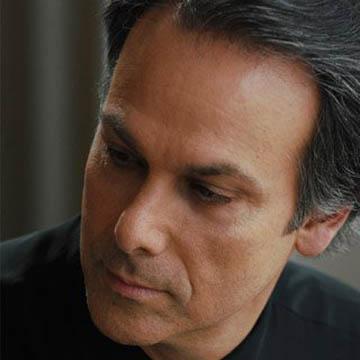 Louis Rosen is insightful, articulate, and entertaining. He approaches artists AS an artist, yet is also an appreciative audience. A consummate educator.

Check https://www.92y.org/ to see what he’s streaming next: Aaron Copeland, Harold Arlen and The Blues, Stephen Sondheim’s Passion coming up.

Actress Anita Gillette knew Irving Berlin. The songwriter would have his secretary dial her when he was feeling blue. I asked about his final years.

“He kind of gave up. In 1969, he became a recluse, only seeing a few people — mostly his family, but keeping in touch by phone with friends. We spoke on the phone during the 70’s but he didn’t go out a lot. As each friend started passing, he became more solitary and sometimes really unpleasant Mary Ellin says. (His daughter) I never experienced that. I was one of the people he would talk to — not frequently, but on his birthday every year May 11th. He continued to dictate lyrics to Hilda Schneider and music to Helmy Kresa until Helmy lost his hearing.

His sense of humor lasted even near the end. When he turned 99, he said to Mary Ellin (after she announced she was turning 60), “Well, a year and a half from now, if I make it, I’ll be 100!  So take it in stride, kid. I wish I’d known I was going to live this long. I would have taken better care of myself!”