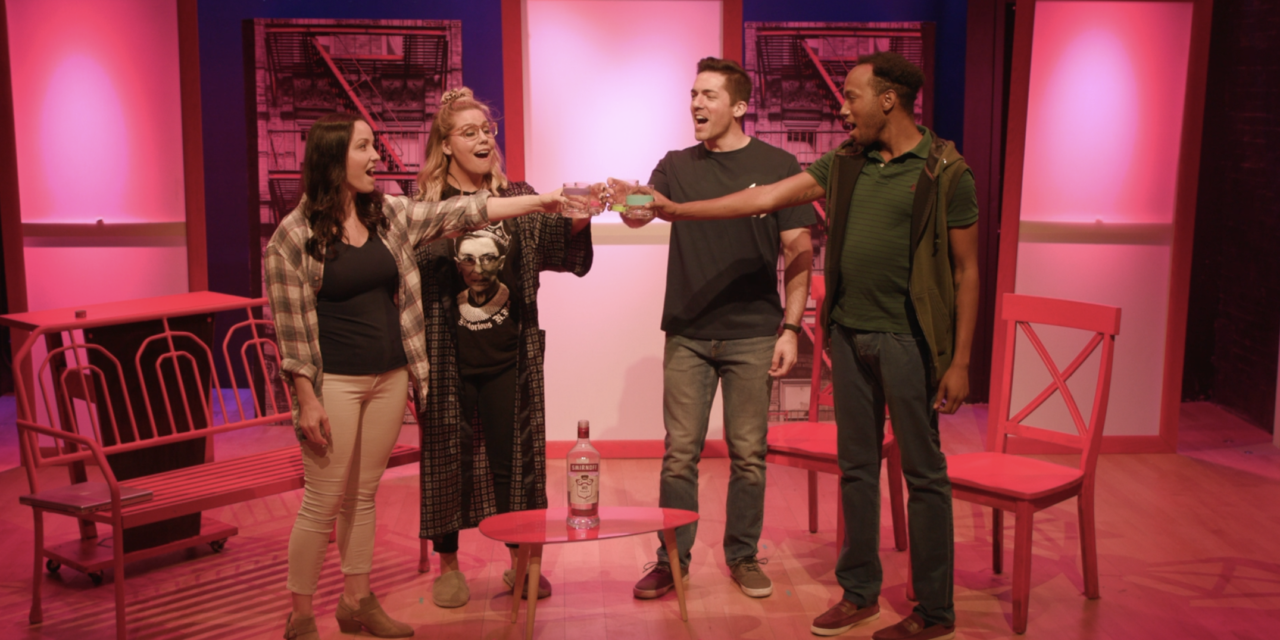 Bachelorette Bobbie of the gender-bent Company may be (begrudgingly) searching for a suitor to acclaimed Tony-winning effect on 45th and 8th, but just a few doors down — inaugurating Off-Broadway’s newly refurbished AMT Theater — the millennial’s answer to the George Furth-Stephen Sondheim tuner is just as wickedly witty, and just as much a journey worth taking!

A sort of Friends-meets-Company mashup for today’s audience, the story sees four college besties in that awkward early 30s stage, unlucky — and, for lack of a better word, lost — in love, whose lives and relationships intertwine, when, due to their aforementioned circumstances, they find themselves all living together under one roof… and not-so-subtly lusting after one another.

There’s Chris (a delightful Matthew Schatz), almost married, but newly single after he finds out his fiancée cheated on him, who hesitantly throws himself into a new relationship as a way to keep his mind off the split; Stephanie (velvet-voiced Lauren Testerman), two years married, now divorced, who dated Chris in college and clearly still has feelings for him; Ryan (a hilarious Erin Lamar), who moved out to chase a guy, but moved back in when his flame fizzled, and who secretly pines for Chris; and Lilli (a terrifically snappy Maggie McDowell), proudly single (but secretly harboring a desire for companionship), who buries herself in grad school work to avoid the dating scene… because she used to date a closeted Ryan, and still yearns for him although he’s now out and unavailable.

Through drunken flings, returned rings, awkward conversations, and ultimate redemption, what ensues follows the four of them piecing together the dismantled puzzle that is their (love) lives, forging a better path ahead for both themselves and each other in their respective relationships.

To start, there’s no question the greatest strength of this production lies in its performers. Lamar, for one, squeezes every ounce of comedy out of Ryan’s unsuccessful attempts to get close to newly-single (and straight) Chris, while McDowell is strong and resolute in the eventual transformation of Lilli, which comes first as a powerfully punchy ovation-worthy monologue in response to Chris’ mopey sullenness and oblivion, and then in song, where she declaratively finds new confidence and self-respect, using it to get exactly what she wants out of life.

Schatz is charming as hell, playfully baiting Steph in the early moments of the show, while simultaneously playing into Chris’ cluelessness of Ryan’s glaringly obvious attraction.

Testerman, with arguably the strongest voice of the four, soars in her numbers, especially “Darling, I Loved You,” a woeful ode to her ex-husband whom she’s clearly not over, with Lilli’s “Who Knows Why?,” a beautifully chilling response to her ongoing infatuation with Ryan, in counterpoint.

Vocally, they all soar both in unison and alone, their resonate four-part harmony brilliantly displayed in both the title tune and the finale.

Bisen-Hersh’s music, on that note, is catchy and bouncy — the bounciest being the title tune — to offset the somber struggle of the subject matter, but is also tender when it needs to be, allowing insight into how these four really feel about themselves, their partners, and their friends.

The thoughtful, poignant lyrics – “All my stuff fits in this bag, but there’s no room for the baggage I’ve amassed” and “A shell of myself is what I had become… I woke up no longer me” among the highlights – as well as the motifs in the melodies, most notably the ongoing repetition of “It Never Works” (until it does!) do much to both move the show forward, and mine through the characters’ emotions conversationally to get at what they really want.

The book, however, though enjoyable, is predictable – of note, it lags a bit in Act II (they can cut the intermission); with Chris and Stephanie’s “will-they-won’t-they” dynamic very firmly established within their first meeting as new roommates, it’s too much to string them along for 90+ minutes, and we can endure only so many scenes with them nearly kissing and then chickening out, while we’re eagerly waiting for them to get together. But it’s a small gripe in what is otherwise a smartly written, lyrically thoughtful, fresh and timely piece.

Indeed, although the second act makes us just want to see them together already, the planting of that initial push-pull seed makes for some of the most intriguing scenes in the first half. In one, Chris speaks to ex Allison on the balcony level, while down in the main playing area, Stephanie speaks with her therapist about her divorce. What’s more? In their separate conversations, they’re talking about their wedding ring – Chris wants his back, and Steph wants to get rid of hers, but can’t bring herself to do it – a symbol of eternity and wholeness shared (sort of) between the two of them.

It’s also worth mentioning that Steph’s “I’m Not Interested in You,” a hypothetical claim to all the men who catcall her, is sung directly to Chris, which suggests she knows in the back of her mind she’s falling for him, despite her attempts to convince herself not to take the plunge.

But though it drags a bit, maybe… on some level… that’s the point. Because sometimes, especially in romantic relationships, it takes a while to figure things out, and come to an eventual realization.

And much like a relationship – as this two-and-a-half-hour exploration promotes – a play takes time and work to keep it moving and evolving. And it’s clear from the start the team has put the effort in.

Though they claim at curtain’s rise “it never works” (and even when it does, there are always the occasional hang-ups, issues and/or titular quirks), Love Quirks is proof that with hard work, time and effort, and steadfast determination, there are certainly times when it does. Sure, it’s “scary… frightening… terrifying” as hell and maybe, you’ll consider whether moving out and moving on was the better option. But even if it takes 10 years and then an additional pandemic-induced 27 months to find what you’re looking for, it’s worth the wait and you may end up with exactly what you needed, even if you had no idea what you needed at first. After all, as they say, love is the answer….

Love Quirks: A Musical Fable Based on Actual Events opened June 27th at the AMT Theater (354 W. 45th Street) and plays through Sept. 2nd. An original cast recording off the Kritzerland Records label, featuring all four of the show’s current players, is available to stream on all platforms. For tickets and/or more information, visit www.lovequirks.com.

Photos: Mark Childers and as noted