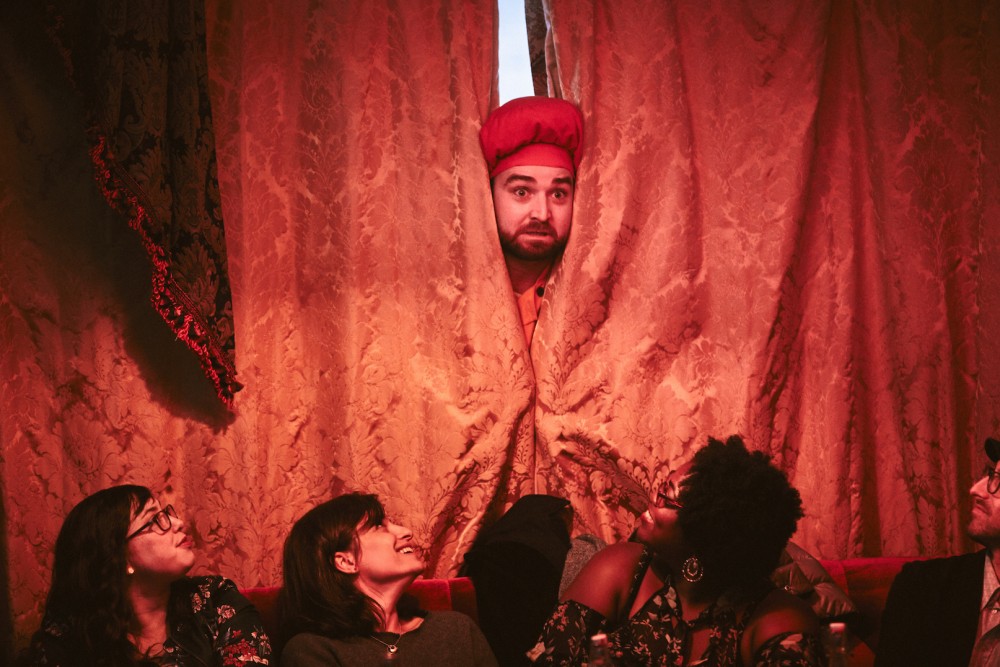 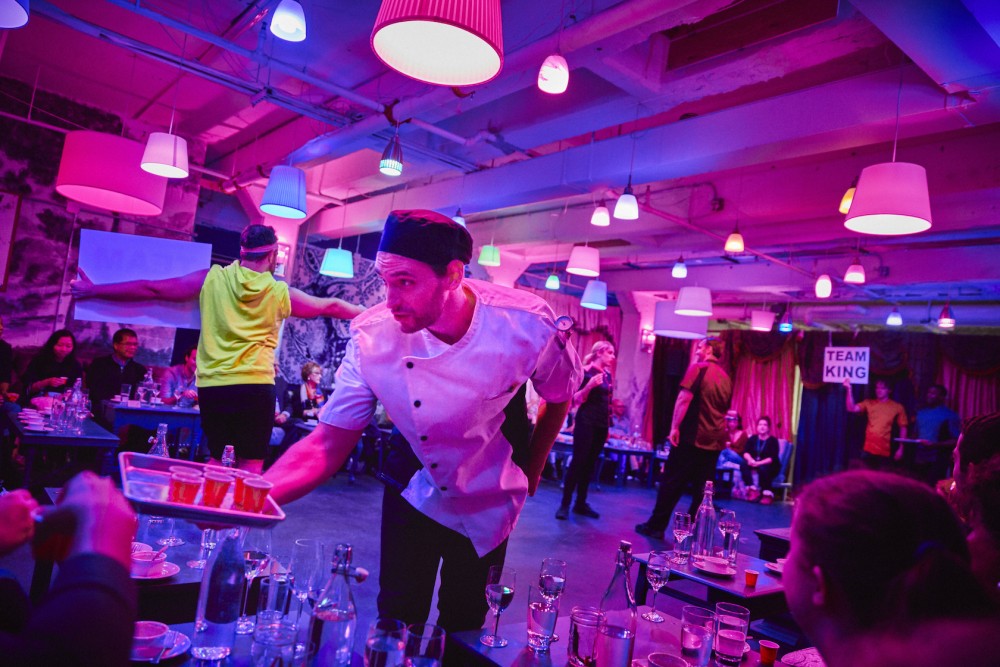 One always imagines the Groundlings—the “common people” in the cheap seats, or standing in front of the stage during Shakespeare’s first productions at The Globe—gnawing on chunks of meat or chewing an apple during a play. So the idea of reuniting the Bard and dinner seems almost natural. And that’s exactly the fare at Shake & Bake Theatre’s production of Shakespeare’s light comedy, Love’s Labour’s Lost. The production, while a delightful example of dinner theater, provides a meal satisfying to a casual gourmand, but is somewhat light on the theatrics. And, quite frankly, that’s probably as it should be.

Audiences are led into a large square room and seated on low sofas around its perimeter in front of tables set for a meal and already adorned with pickled vegetables in a mason jar. In our case it was string beans and thin carrots. Delicious. An auspicious beginning. A wandering troubadour bearing a guitar serenades guests, slightly off-key, but nonetheless charming. A table card bears a dual menu: the evening’s courses (eight!) which ran the gamut from “Her Royal Lodging” (a lovely salad of field greens with a tart balsamic quinoa dressing) to “The Bounty of the Hunt” (a smoked brisket taco adorned with a surprisingly well-suited vinegar slaw). All delicious. Executive Chef David Goldman (one of this year’s FSR magazine’s “Restaurant Stars on the Rise”)  ain’t foolin’ around. 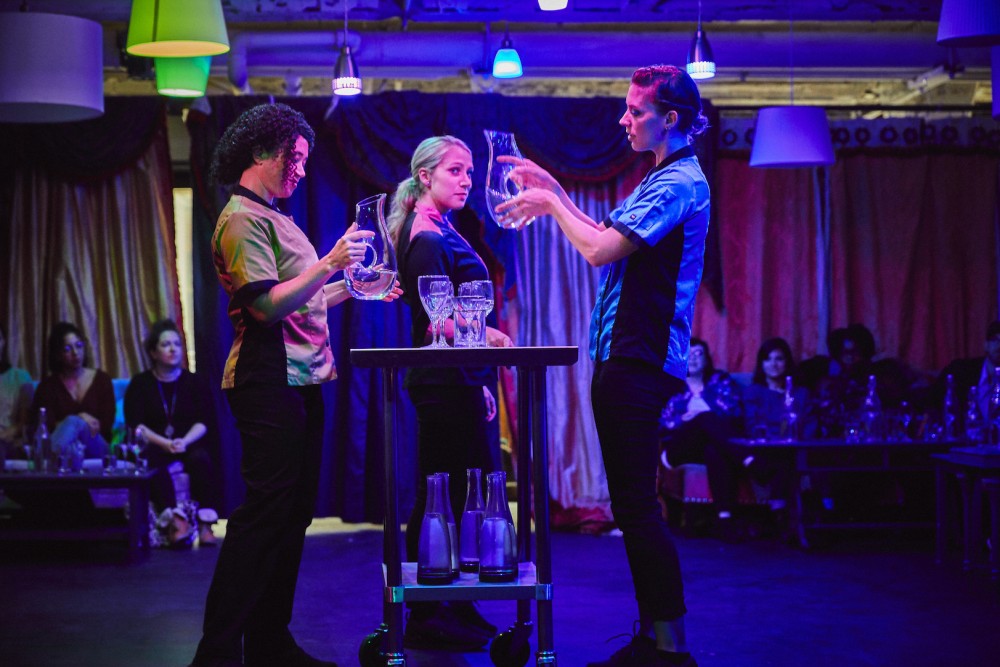 On the table card’s reverse was a summary of the theatrical fare, in which Love’s Labour’s Lost is artfully summed up as a play about the King of Navarre (Darren Ritchie) who makes a proclamation with his nobles (his two buddies, in actuality), that—for a period of three years—they swear off  women, restrict their meals and sleep, along with other measures of austerity in order that they may devote their time and energy to “study” (religious, mainly). Of course their pious plans are routed by the arrival of the French Princess (Victoria Rae Sook, who also co-adapted and choreographed the production) and her (quite conveniently evenly balanced with the King’s men) two Ladies. The men fall in love with the ladies and vice versa and the whole strict and absurd study plan is put to test. Hilarity ensues.

Love’s Labour’s Lost is essentially a triple play (or is it quadruple?) of meet-cute. There couldn’t be a better Shakespeare play to periodically interrupt for the purpose of serving another course of the evening’s meal. The ethereal plot doesn’t really matter much, because even if people are paying attention, and the audience seems to be trying in earnest, it’s nearly impossible to stay focused. Just when you’re watching a character snort Cheetos dust like cocaine (Cheetos being the more valuable currency in this production’s kingdom than the usual requisite sack of coins), a delicious dish of “Cheeto Dusted Mac n’ Cheese” is placed in front of you, and the next five to seven minutes of story falls off the end of your fork. Which is why the Shakespearean elements of comic relief, the pompous Don Adriano de Armado (the over-the-top, hilarious Charles Osbourne who plays the ridiculously comic role of Boyet as well) and the peasant/clown Costard (Rami Margron, who doubles almost invisibly as the Princess’s lady, Maria) end up playing such an enormous role in this production. 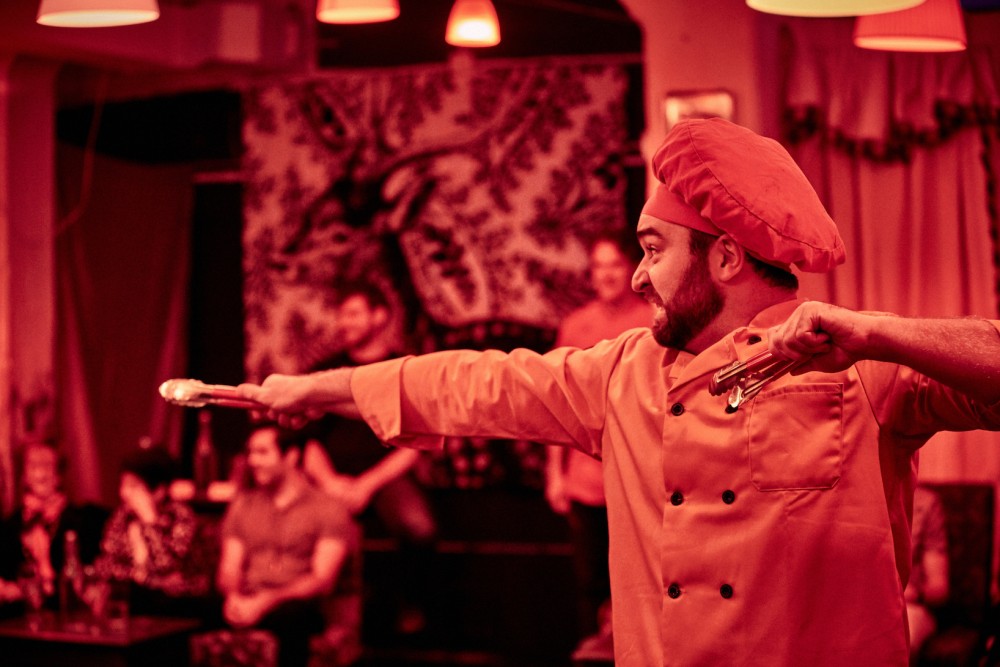 The overall experience is largely the result of Dan Swern’s able direction and myriad production values: from snippets of thematically appropriate and familiar pop music (by the likes of OutKast, Queen, and a tongue-in-cheek cover of Lourdes’ “Royals”); to vividly color coordinated chefs “whites” as costumes (Dan Swern again); to table service provided by the actors themselves (cue joke about actors’ experiences as waiters). This production really isn’t about Shakespeare, though it’s a nice accessory; it’s more a means of making it more palatable for those who’ve never had much interest in his plays. Given the success of the venture, maybe we’ll be seeing a “Hamburger Hamlet,” Romeo & Julienne of Vegetables,” “A Winter Squash Tale” or “The Titus Andronicus Pie Eating Contest.” Though perhaps at some point the joke will be worn out (probably at that last one). Meanwhile, the libations of Love’s Labour’s Lost make for a delightful night of tasty  dinner theater. 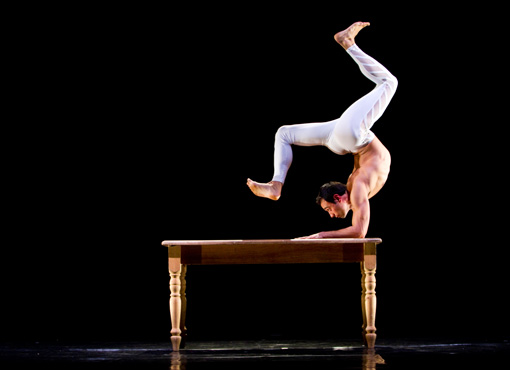 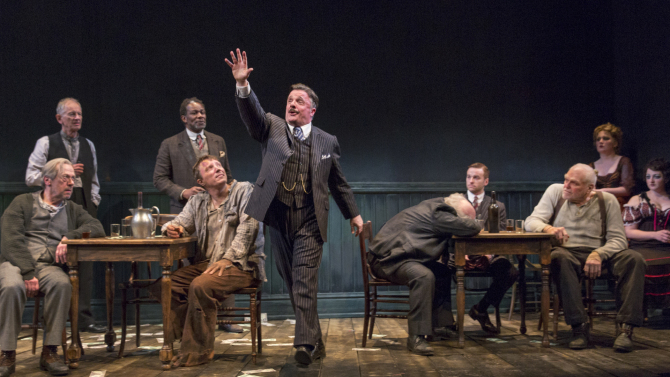