Lynda Carter at The Appel Room 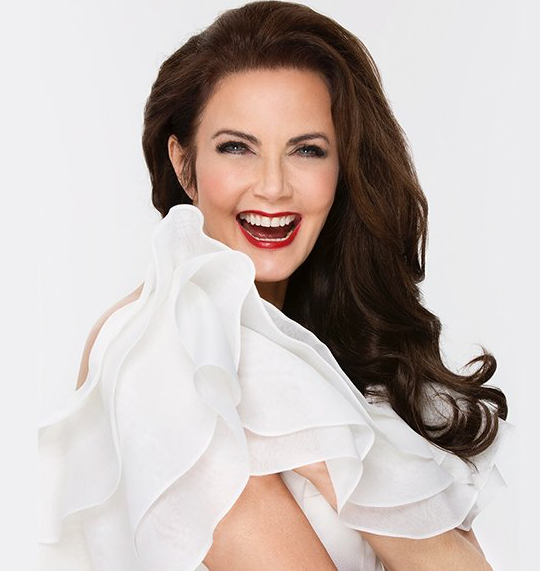 Lynda Carter regaled the audience within Jazz at Lincoln Center’s Appel Room Saturday night with songs that mattered to her.  Born in Arizona, Lynda Carter is best known for winning hearts and teen’s minds as TV’s iconic Wonder Woman. In addition to her career, Carter is an accomplished singer who has performed to rave reviews before sold-out audiences around the world and holds the distinction of producing and starring in five highly rated CBS television specials, which received, multiple Emmy Award nominations.  With stellar views of Central Park and a full moon, Carter covered an ambitious set of multiple genres including pop, rock, country, Texas swing, jazz, and blues.

The evening was branded THIS LIFE: “My Music-My Story,” and it is a pleasant, engaging concert with her all-star band.  Carter takes obvious pleasure in performing many of her favorite songs for an audience of devoted fans. As striking as her physical beauty is Carter’s immense and unusual generosity toward the A-List instrumentalists who help her deliver this entertaining performance.  Led by drummer Paul Leim, this tight ensemble is a pleasure to listen to and are comprised of guitarist Kerry Marx, bassist Danny O’Lannerghty, keyboardist Pat Coil and saxophonist Sam Levine.

They opened with Jerry Lee Lewis’ “Great Balls of Fire.”  Then dove into Elton John and Bernie Taupin’s hit “Philadelphia Freedom.”  But the true highlight of the evening was Carter’s original composition “Toto.”  Here she hit all the right notes and pathos and the audience responded enthusiastically.  The band funked up “Take Me to the River.”

Later she and Jessica Carter Altman (her daughter) dueted on “Done me Wrong” and then Carter ceded the spotlight for  Jessica’s version of “Wicked Lies,”which is on her debut EP to be released later this year.

Recent years have brought Carter a legion of new fans who recognize her from her many voiceover appearances in hit video games, including “The Elder Scrolls” and Video Game of the Year “Fallout 4” for which she not only vocally brought the character of Magnolia to life, but also wrote and performed five songs, one of which received a Best Original Song nomination from the National Association of Video Game Reviewers.  She performed two numbers from the video games one as Magnolia.  The other ably assisted by her three back-up singers — Cindy Richardson-Walker, Kira Small and Tania Hancheroff — all successful studio vocalists who have collectively worked with the biggest rock, pop, and country stars in the industry, made an invaluable contribution to Carter’s set.

Carter is a lovely artist with a comfortable rapport with her band and co-singers.  Her ease and affinity is so down to earth that one would hardly believe that she was once a superhuman.