The Statue of Liberty is perfectly cast with a charismatic, transgender actor named Shakina Nayfack. It is Liberty’s job to box with illegals, and down for the count, get the immigrant to lose and be deported. That is until one kid Manuel (Gil Perez-Abraham) who will not give up enters the ring, so to speak. His single mother (Tami Dahbura) and sister (Alicia Taylor Tomasko) are behind him all the way. The sister is a citizen because she was born in the U.S. but the mother is perpetually waiting for her green card to come in the mail and is scared that if her son calls for attention, she will be deported. His teacher (Michael Martotta) sponsors him, mentors him all the way to Princeton. He gets a chance to go to Oxford but cannot get back in the country once he leaves, so turns down going, and is overridden by his mother. He goes, she gets deported—but after several clever fun songs the whole dilemma works out—at least for him and his family.

This is a sweet, sardonic look at what seems an impossible situation. And this cast makes the most of the choreography, music and genuine heartfelt story to keep everyone tapping feet and maybe identifying with the undocumented. (Great take using the boxing metaphor, by the way—immigrants are knocked out even before they can get going.) The whole show is effective, especially when the bad guy/Lady Liberty is so sly and funny. 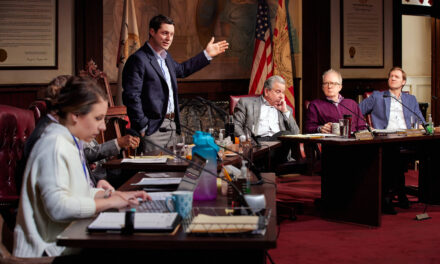