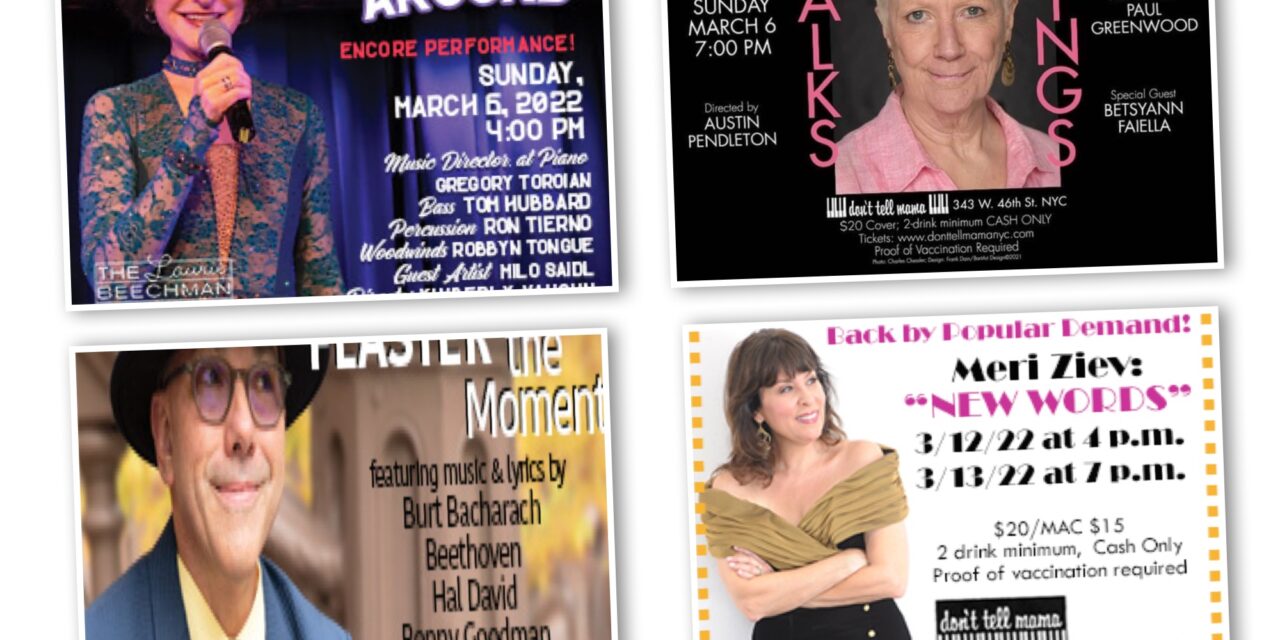 (ORDER Based on Show Dates)

Meri Ziev is back at Don’t Tell Mama with New Words on March 12 at 4 pm, and March 13 at 7 pm with Christopher Denny on piano and quite a team as consultants – Faith Prince and Lina Koutrakas. With golden pipes, this storyteller presents a heartfelt self-portrait filled with surprises! Don’t Tell Mama – Tickets HERE

Following her sold-out shows, Susan Mack returns with an encore performance of MUSIC IN THE AIR on March 14 at 8:30 pm, celebrating the profound power and magic of music in our lives. Through jazz standards of composers including Cole Porter, Antonio Carlos Jobim, Irving Berlin and Chick Corea the show rejoices in their “forever music” – bringing a contemporary spin to the dancing, romancing and loving that music inspires in all of us. With Ted Rosenthal, David Finck, Ray Marchica. Tickets HERE

Returning to Pangea to celebrate the Irish in us all – with song, story, and sensitivity – on March 17 at 7 pm and March 20 at 2 pm, is acclaimed performer Tim Connell. Joining him are long-time collaborator-musical director, James Followell, and guest artist, Ari Messenger, on violin and fiddle. The evening is directed by Steven Petrillo. Tickets: www.pangeanyc.com

Ghosts of Weimar Past – Artemisia LeFay returns to Birdland Theater March 21 at 7 pm – a program of musical time travel honoring the spirit of cabaret and vaudeville from the birth to the death of Weimar Berlin. All- female cast of musical characters, including Mary Spencer Knapp (Toot Sweet, Natasha, Pierre, & The Great Comet of 1812) on accordion, Hannah Mount (musical director at Molloy College, Seussical the Musical) on piano, and Tiffany Weiss (Lotus Chamber Music Collective, The Tonight Show with Jimmy Fallon) on violin. Songs of Michael Jary, Mischa Spoliansky, Kurt Weill channeled through the music of the Orchestra of the Depraved and chanteuse Artemisia LeFay. Tickets HERE