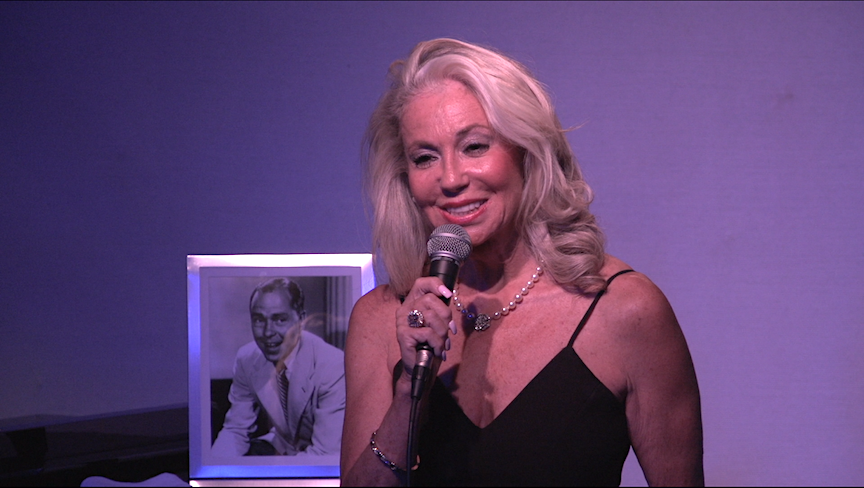 Margo Brown, with the aid and input of her director, the splendid Jeff Harnar, made her New York debut at Don’t Tell Mama’s in a bold, interesting and exceptionally well-planned show in which Margo, a Boca Raton native, sang her “favorite 700” of the 1400 to 1500 gloriously poetic lyrics written by Johnny Mercer which made him immortal. Margo actually warbled 23 of them to lush, perky and unforgettable melodies from the pens of outstanding composers who were aided by Mercer’s crafty phrases and rhymes in getting their tunes into what’s known as The Great American Songbook.

One might well ask which of Mercer’s cohorts did Margo Brown include in her 60 musical minutes on stage. Here’s a list of 13 of them, all born between the years of 1885-1954, in order of their appearances on Planet Earth: Jerome Kern, Victor Schertzinger, Richard A. Whiting, Harry Warren, Hoagy Carmichael, Rube Bloom, Matty Malneck, Robert Emmett Dolan, Harold Arlen, Woody Herman, Henry Mancini, Heinz Meier and the only one still ticking the ivories, Barry Manilow. Johnny Mercer is also included for supplying the music as well as the words to “Dream” and “Goody Goody.” Mercer started out in the Savannah, moved to New York for a while and relocated to Hollywood, where he spent considerable time before 1935, meeting the musical mate that fate had him created for — Harold Arlen who put Mercer’s career into play. Their first hit, “Blues in the Night,” in 1941, was called the greatest blues song ever written and that was followed by two moody songs which were both included in Margo Brown’s show, “One for My Baby (and one more for the Road,” and “Come Rain or Come Shine,” with lyrics worthy of a poet of melancholy. Margo Brown’s on-stage personality, demeaner and appearance is reminiscent of 1940-ish Hollywood black and white noir-ish films, specifically Road House in which Ida Lupino as Lilly Stevens warbled the unforgettable lyrics to “One for My Baby.” Margo’s black silk slip of a costume, her pearl necklace with a diamond clasp, thin gold bracelet and her shoulder length platinum hair were totally WWII in the best way. She looked sexy, relaxed and comfortable. She connected easily with her audience who responded happily to her singing and her selections. They enjoyed her show and applauded loudly and frequently. She was particularly effective singing Mercer’s wistful phrases in songs like “Moon River,” “Summer Wind” and “My Shining Hour,” and on minor key melodies with defined feelings of a rejected lover like “Early Autumn,” “Out of this World.” I commend her for including a 1974 all Mercer song entitled “I Fought every Step of the Way,” which could be an anthem for 2018’s #metoo harrass-ees. But she needs to work harder to master songs with wider ranges, and while Tedd Firth’s arrangements are always extraordinary, Margo Brown might have been happier if the keys, which her excellent trio played – Phil Hinton on Piano, Sean Harkness on Guitar and Bob Renino on Bass, were half a tone or a tone lower.

Margo was celebrating her birthday four hours later and she thanked the audience for their applause and appreciation. “The whole night was the best birthday present I could ever have asked for.” We hope she has many many more.