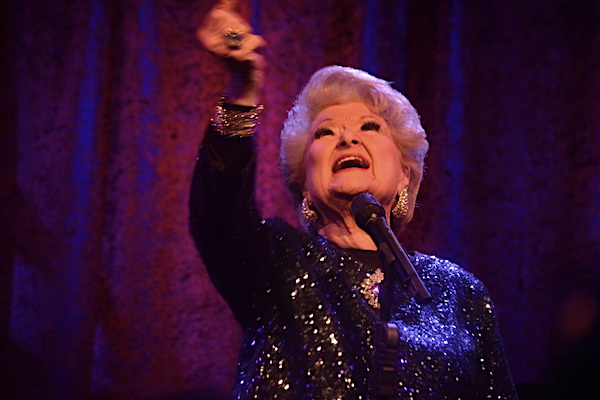 During an astounding and long career, Marilyn Maye has been an actress, director, educator, arranger and vocalist, appearing in countless cabaret and concert venues—but her very happy place is on a jazz stage. And as she demonstrated on her opening night at Birdland Theater, there’s no doubt about that reality. Maye was on fire. Her vocalese and scat to the metrically challenging “Take Five” (Paul Desmond, Iola Brubeck), which she first recorded in 1965, was completely awe-inspiring. Disclosing a particular love for Fats Waller, she powered through “I’m Gonna Sit Right Down and Write Myself a Letter” (Fred Ahlert, Joe Young) with spectacular jazz phrasing, “Ain’t Misbehavin” (Fats Waller, Harry Brooks, Andy Razaf) and a blues-based “Honeysuckle Rose” (Fats Waller, Andy Razaf). These tunes alone scratch the surface of an amazing set comprising 90 minutes of prime Maye and glorious song.

Peppered among the goodies were “in” references of note. For instance, Maye opened the set with “It’s a Most Unusual Day” (Jimmy McHugh, Harold Adamson), a tribute to the late Beverly Kenney. Kenney, Maye’s contemporary, died in 1960 at age 28, but she’s been living again in sound by virtue of a recent, oft-played car commercial that features her rendition of the song—and it’s captured the attention of many hearing her voice for the first time. In one of her medleys, Maye included “Pack Up Your Troubles in Your Old Kit Bag (And Smile, Smile, Smile)” (George Powell, as George Asaf, Felix Powell). That oldie is a World War I-era hit, popular when the world was in another pandemic—the throes of the 1918 Spanish Flu.

Anchored in her happy place, The Marvelous Marilyn Maye was especially so—relaxed and in fine form quipping and ad-libbing with great wit and humor. At one point she reflected that she might be channeling Susie Mosher, the popular and gregarious host of “The Lineup,” a Tuesday night Birdland Theater staple. Like her relationship with this night’s audience, her interactions with her musicians was familial. Daniel Glass held steady on drums and Tom Hubbard, who had a few solos, was in exceptional form. But it was with pianist Billy Stritch that the cup of mutual love and respect overflowed. Maye reported she’s known Stritch from when he was first starting out, and indeed they’ve welcomed in almost two decades of New Year’s Eves together. His vocal contribution (adding to some audience participation) on “I’ll Never Fall in Love Again” (Burt Bacharach, Hal David) was simply charming.

The ingredients that make up a Maye concert are consistently A-list in all regards, and one of them is the arrangements, which not only suit each number to a “T,” but which contribute to the perfect pacing of the set. Her medleys are, likewise, brilliantly conceived and put together, sometimes whole and thematically linked, sometimes with tunes weaving in and out of each other. And sometimes there’s wisdom dispensed by the sage Maye—at no extra charge. She counseled about her “smile” medley, remember to smile under your mask, and let people know you are smiling! That medley of several songs was bookended by “Smile” (Charles Chaplin, John Turner, Geoffrey Parsons) and “Put on a Happy Face” (Charles Strouse, Lee Adams). In one of her medleys about the many faces of love, a standout was “My Romance” (Richard Rodgers, Lorenz Hart). Ticking off the boxes of genre versatility, vocal range and flexibility, this ballad was a master class in lyric interpretation. With authenticity and nuance, Maye told the story, and it was deeply heartfelt and moving.

Finally, as all good things must end (so “they” say), the last medley in Maye’s repertoire was a hat’s off to the City of New York. She calls Kansas City home, and is deeply rooted there, but Gotham is her home away from home. Interweaving many musical odes to this town, there was no doubt that she and we of the audience love our city. She said it all with “I Happen to Like New York” (Cole Porter) and “My Personal Property” (Cy Coleman, Dorothy Fields). Among a few more NYC-centric songs, it didn’t take much to put us all in a mellow, happy New York state of mind. Throughout the set, the wily Maye teased with an “almost” high kick. It was during the encore, “It’s Today” (Jerry Herman) that the payoff came: not one but two high kicks and, of course, the audience went wild. That reaction wasn’t the first time during her remarkable performance. Marilyn Maye, once again, in show-biz parlance, killed it.