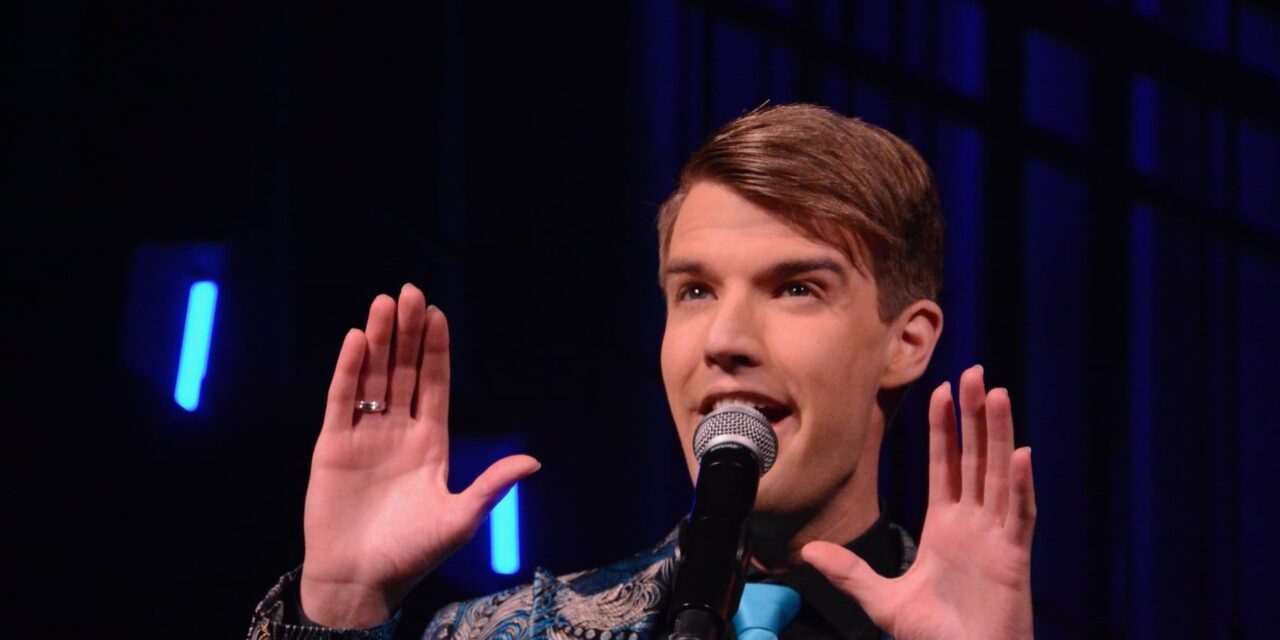 Mark William, at first glance, seems like the kind of fresh-faced, wide-eyed boy who lands in Manhattan off a Greyhound bus from Ohio and winds up in a Broadway chorus on his first shot.  But in fact, the multi-hyphenate (singer-dancer-actor and more) Mark has been around for a few years, developing his skills and a sizable following as a performer in the tradition of the best Las Vegas entertainers.  Like most great entertainers, you can often gauge their career ascendance by the echelon of those in attendance.  For Mark’s debut at the new and gorgeous Chelsea Table and Stage, the sell-out crowd included a veritable Who’s Who of New York cabaret and Broadway stars, including Lee Roy Reams, Haley Swindal and Jana Robbins, and so many more that Mark needed to read them off a long list.

The venue, which only opened last September in the Hilton Fashion District Hotel, has the appearance of a converted warehouse space with a curved, open staircase leading to the dining room, the smallish stage just stage right of the stairs.  While the six-piece orchestra played an overture written for Mark by Clint Edwards, Mark, dressed in black and turquoise with a fabulous silver and turquoise dinner jacket, made a grand entrance singing his opening medley, holding a wireless mic, to great effect.

Mark’s set was eclectic and sometimes electrifying, with Mark mining some standards, Broadway material both old-school and new, along with modern pop music and one of his own songs.  These came in the form of thoughtfully curated pairings and medleys.  Mark has the makings of a hit with his original tune, “Wherever We Land,” with clever, catchy lines like “I’m losing all my marbles in this game with you,” and “You’re the lead singer in my rock band.”

The night really picked up with a great medley of “Whatever Lola Wants” (Richard Adler/Jerry Ross) from Damn Yankees and “Let’s Make Love” (John Kander/Fred Ebb from Kiss of the Spider Woman.  Here, the triple-threat Mark gave us more than a hint of his dancing ability.

Mark’s Valentine’s Day “Love Medley” – – “The Girl from Ipanema,” “The Look of Love” and “The Way of Love” (Antonio Carlos Jobim/Vinicius de Moraes/Normal Gimbel; Burt Bacharach/Hal Davie; Jackes Dieval/Al Stillman) – – brought different perspectives of crushes, passion and pain into one masterful piece.  Mark’s powerful interpretation of “The Way of Love,” a song most associated with Cher, brought a surprising pathos to the previously optimistic tenor of the first two parts of the medley.

It was only apropos that Mark sang a festive “Put on Your Sunday Clothes” (Jerry Herman) from Hello Dolly with Lee Roy Reams in the audience.  Reams, who has directed the show on Broadway and has even played Cornelius Hackl, is the only American male to star as Dolly Gallagher in a sanctioned version of the show.  It was Mark’s next song, “The Music that Makes Me Dance” (Jule Styne/Bob Merrill) from Funny Girl, that was the ballad highlight of the evening.  Mark’s lower register has the kind of rich resonance of the late Dick Haymes.

“We all deserve a little magic,” Mark stated.  His “Magic Medley” was exceptionally clever, mashing up the rarely heard TV theme to “Bewitched” (Howard Greenfield/Jack Keller) with Cole Porter’s “Bewitched, Bothered and Bewildered), and blending in “That Old Black Magic” (Harold Arlen/Johnny Mercer) with “Witchcraft” (Cy Coleman/Carolyn Leigh).  Here, Mark took the opportunity to work the room, moving with a dancer’s grace from table to table, and serenading several lucky patrons along the way.

Mark, at 27, has only grown in stage presence and confidence since he first caught my attention several years ago.  His voice has matured, and he has a deep, rich lyric baritone with an upper register that has a tenor quality.  He is an excellent showman, and it will be interesting to watch him in his upcoming projects.