Mary Deady: My Love is a Wanderer 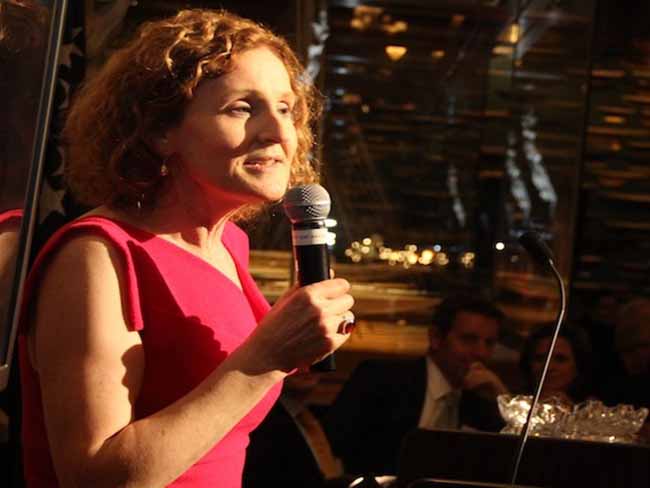 On April 5, Mary Deady, an Irish-American lass, with a classically trained lyric soprano appeared in a cabaret show at the Laurie Beechman Theatre entitled My Love Is A Wanderer, a fictional memoir in song. Her music director and singing collaborator was Jeff Cubeta.

The theme of the show was her unrequited love for the “wanderer” in the title, whom she follows from Shannon, Ireland to Paris and then to Rome as well as other foreign cities. Appearing in a multi-flowered gown, Deady’s song selection was not only Bart Howard, but also multiple selections by Leslie Bricusse (alone and with Tony Newley), Noel Coward, Sondheim, Cole Porter, and Cy Coleman.

After the title song, Deady found herself rejected in Paris, and her comment was Coward’s “If Love Were All.” On several selections her high notes were strained and her excessive vibrato was uncomfortable. However, she did some clever selections including “Love Is In The Air” and several choruses of Coward’s “Why Do the Wrong People Travel.” She did two choruses of “The Sweetest Sounds,“ changing keys on the second; but she did not sing the wonderful verse to that song. There was a long traveling medley that featured “Stop Worrying Where You’re Going,” “I’m Flying,” “Buenos Aires,” “The Last Time I Saw Paris,” and the Theme from Mahogany. When she sang Kander and Ebb’s “I Don’t Remember You,“ she did not sing it angrily, but sweetly instead.

The best selections were her strong versions of “I Happen to Like New York” and Julie Gold’s great song “The Journey.” These two songs demonstrated what a good actress she is because each was a perfect one-act play.

At the end of the show Deady stated that March had been Irish-American month and she wanted to celebrate. She sang many unfamiliar verses to “Irish Eyes Are Smiling,” which began a cappella and then became a sing-along with the audience. She then did the famous Irish blessing known to all, and these numbers demonstrated a great relationship with the sold-out house, many of whom seemed to be Irish-American.

Cubeta is the best partner any singer could have, often singing with her and sometimes even finishing the selection. What Deady needs is a strong director to carefully guide her through her performance.

Mary Deady performed My Love Is A Wanderer on April 5, 2016 at the Laurie Beechman Theatre, downstairs at the West Bank Café (407 West 42nd Street, between Ninth and Tenth Avenues). www.westbankcafe.com