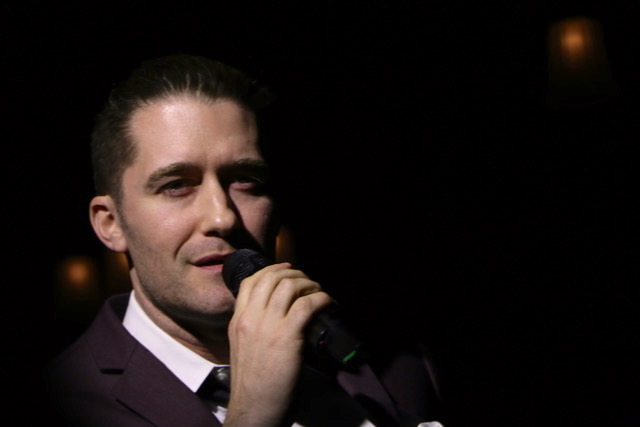 With Sensational Self-Titled Solo Show, Matthew Morrison Proves “You Can’t Stop the Beat” — Or the Charm It may be cold outside, but all is warm and abuzz inside the intimate Feinstein’s/54 Below. A swingin’ band of four plays a rare, but enticing, jazz overture, which soothes the crowd and sets the mood, as patrons young and old eagerly await the arrival of Broadway’s tried-and-true heartthrob, Matthew Morrison.

Then, almost instantaneously, atop the bar steps, glimmering in all his of glorious manly glory, the man of the hour magically appears.

“Let’s take it nice and easy,” he sings, slinking his way through the crowd. “It’s gonna be so easy / for us to fall in love.”

And for the remainder of the evening, he proves that lyric to be true, gliding through his set list just as easily as he does the swooning sea of women that surround him as he enters, each one clamoring for a selfie harder than the next.

For one, Morrison certainly doesn’t take the “heartthrob” title lightly, as there’s no denying he’s got these women in the palm of his hand, playfully singing to them, lounging in their laps and sneaking onion rings off their dinner plates — much to the delight of these giggly, starstruck fangirls. But it’s not just his charm that’s earned him his well-deserved place among bona-fide Broadway stars. There’s another unarguable quality that’s cemented his superstar status: he knows how to put on a damn good show! This particular evening strikes a perfect balance between being fast in pace and breezy in conversation, with Morrison coasting on his natural charm and charisma in between top-notch bluesy renditions of classics from the musical theatre canon and American jazz songbook.

Jazzy revamps of My Fair Lady’s “On the Street Where You Live” and The Pajama Game’s “Hey There” offset the more traditional fare of Bill Withers’ “Ain’t No Sunshine,” and Ella Fitzgerald’s “It’s All Right with Me.” He fashioned an Oliver! classic into an ode to his son, Revel James, and brought up his wife, the equally stunning Renee Puente, for a raucous tribute to the Beatles.

In light of our current political situation, he dedicates his gorgeous ukulele solo of The King and I’s “We Kiss in a Shadow” — written by the closeted Oscar Hammerstein II at a time when it was sinful to be out and proud — to those in our world who still feel unsafe to love freely and openly, while his jazzed-up rendition of John Mayer’s “Waiting on the World to Change” served as a haunting reminder that, though we’ve made great strides in advocating for ourselves and others’ beliefs since the song’s initial release in 2006, there is still work to be done.

And of course, no Broadway heartthrob’s concert is complete without a pass at his resumé; numbers from Light in the Piazza, Finding Neverland, and South Pacific punctuating the evening’s second half. He even takes on what can only be described as a mega-medley of Hairspray hits, turning the majority of the Shaiman/Wittman score into a rousing, 8-minute one-man-show, complete with mic flips, moonwalking and of course, “Peyton Place After Midnight.” To boot, he’s got a natural rapport with his audience, discussing everything from his holiday escape to Hawaii, the surprising ways he woos his wife, and, naturally, the joys of (twice!!) singing on Broadway with his shirt off. He’s equally comfortable trading barbs with musical director Brad Ellis — whom, Morrison notes, you may recognize from “a little unknown television show I did a couple of years ago” — as well as his musicians, Daniel Kalisher (Guitars), Gary Wicks (Bass), Pete Antunes (Drums), and Jimmy Emerzian (Sax), who show off their stuff within the plentiful instrumental breaks included within each number.

In short, there’s simply nothing this man can’t do — and just as we are enamored to hear his silky smooth voice croon these top-notch classics, so, too, is he to be given the opportunity to share it. He’s delighted, and truly lives in each note and word he sings, captivating the room with his suave “nice and easy” attitude. That’s what makes him the likable, lovable leading man he is. But then again, why wouldn’t it? After all, as the lyric tells us, “Nice and easy does it every time.”