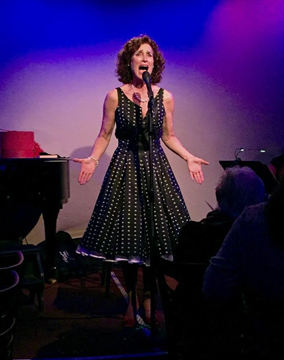 Less well known than contemporaries like Rodgers and Hammerstein, the self-effacing Merrill composed pop songs, including the quirky and iconic “How Much Is That Doggie in the Window,” “Mambo Italiano,” and “If I Knew You Were Comin’ I’d’ve Baked a Cake” as well as musicals such as Carnival and Funny Girl. Taylor predominantly chooses to mine his all but unknown work, sharing numbers from shows with brief lives. In this, we benefit.

“Travelin’” (Breakfast At Tiffany’s) opens the show, the infectious embodiment of the happiest “gentleman hobo” (Merrill’s self description) you’ve ever heard. We have no idea how the song fit into story narrative, from where or why the author hopped freights, however. Twice we hear a snippet of “Holly Golightly” connected neither to what precedes or follows. The musical fares better later with a rendition of “Same Mistakes,” whose universal context and credible resolution are not just obvious, but here, emotionally credible.

When Taylor is invested, she convinces. “Look At Him” (New Girl in Town) is halting and hopful. “Kissed On the Eyes” (Hannah) emerges gentle, reflective, thrilled, though one can’t help wishing it didn’t get big. A palpably warm “When It Happens to You” (music-Jule Styne-The Red Shoes) engenders empathy.

Charming contributions include “I Did It On Rollerskates” (music- Jule Styne-Funny Girl) with tickling mandolin and comedic timing, a lovely arrangement of the Sarah Vaughan hit “Make Yourself Comfortable” and the zippy “Candy and Cake,” both appealing duets with Castle.

Guest Reverend Yolanda (Roger Anthony Yolanda Mapes) gives us “The Beauty That Drives Men Mad” (music Jule Styne-Sugar, the musicalization of Some Like It Hot.) The song is growly, emphatic, and seems more like parody.

There are too many aborted numbers which barely give us time to enjoy unfamiliar material, arrangements are similar, and formulaic approach too frequently ends up big regardless of lyrical intent. I might attribute this to opera training, but it’s clear that the vocalist can take it down when she wants to. Nor do I understand how “I Wish Somebody Cared Enough to Cry” can be interpreted as bouncy and upbeat. As intermittent references to the honoree seem like shorthand and the show has no arc, we’re also left without an impression of Merrill himself. This wouldn’t be an issue if efforts to the contrary were not evident.

Maureen Taylor connects well with her audience, understanding cabaret intimacy. She has what appears to be a confident alto and a fine sense of phrasing. Quieter numbers reveal an engaging trill. This show, however, is splintered and confusing, both in performance and content.