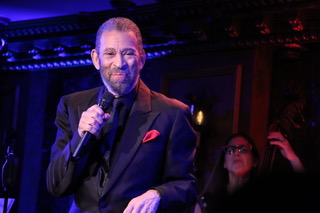 Triple threat Maurice Hines, who can well stake a claim to the handle of “legendary,” literally had ‘em begging for more as he left the stage of Feinstein’s/54 Below. The clamor was for cause. In the language of the trade, he was sublimely boffo. Combined with the out-and-out excellence of the all female DIVA Jazz Orchestra, Hines and Tappin’ Thru Life delivered a neatly timed hour of nonstop entertainment magic.

But then Hines was practically born in a trunk, performing as a tap duo with late brother Gregory when both were kids in knee pants. Now a seasoned 75, Hines is the epitome of the kind of Golden Age entertainment that’s receding into the past – a glittery, glam world of supper clubs, Las Vegas, variety television and Johnny Carson. The moment he launches into his first number, “I’ve Never Been in Love Before” (Frank Loesser) the polish, sophistication and sheer delight of being on stage is evident. Hines is at home on that piece of real estate. He’s got the moves, and they are elegant. Nor is Hines afraid to play with the music – to animate it, mold it and shape it to his will.

He’s been performing a variation of Tappin’ Thru Life with The DIVAS since 2013. His confidence is complete and the connection with the audience is a smooth, natural one, helped by the familiarity with the material. The core of the show is a celebration of memory – of brother Gregory and their careers and the people who influenced the pair. It’s by nature a joyful show, with a practiced narrative flowing seamlessly into song. For his tribute to Frank Sinatra there were several tunes, including “Come Fly with Me” (Jimmy van Heusen/Sammy Cahn) and “Luck Be a Lady” (Frank Loesser). Nat King Cole was remembered with numbers such as “Smile” (Charles Chaplin/Geoffrey Parsons/John Turner) and “L-O-V-E” (Bert Kaempfert/Milt Gabler). Hines’ penultimate number, “It Don’t Mean a Thing (if it Ain’t Got That Swing)” (Duke Ellington/Mitchel Parrish) was the cherry on the sundae – tapping to the tune like a youngster, no one could doubt he wasn’t giving 100 percent of himself to his audience. 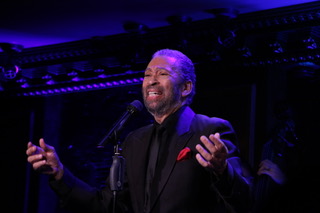 The DIVAS, who provided a backup chorus on this number, as well as an earlier tune, “Every Day I Have the Blues” (Pinetop and Milton Sparks), are inextricably part of the show. The chemistry between Hines and the band is beautiful to behold, with affection and respect flowing in both directions. Now in their 25th year, the DIVAS are themselves a force of nature. They’re a tight, disciplined complement of musician that swing hard in the Count Basie tradition. Their opening medley was bright and clear and powerful, as was their play out number as Hines exited the room and the crowd demanded more. The DIVAS, likewise, shone in a solo section in Hines’ rendition of “I’ve Got You Under My Skin” (Cole Porter) and in their own turn with “Caravan” (Juan Tizol) during which DIVA founder and leader, Sherrie Maricle, performed a breathtaking, extraordinary drum solo. Another standout was bassist Amy Shook’s solo introduction to “Honeysuckle Rose” (Fats Waller/Andy Razaf).