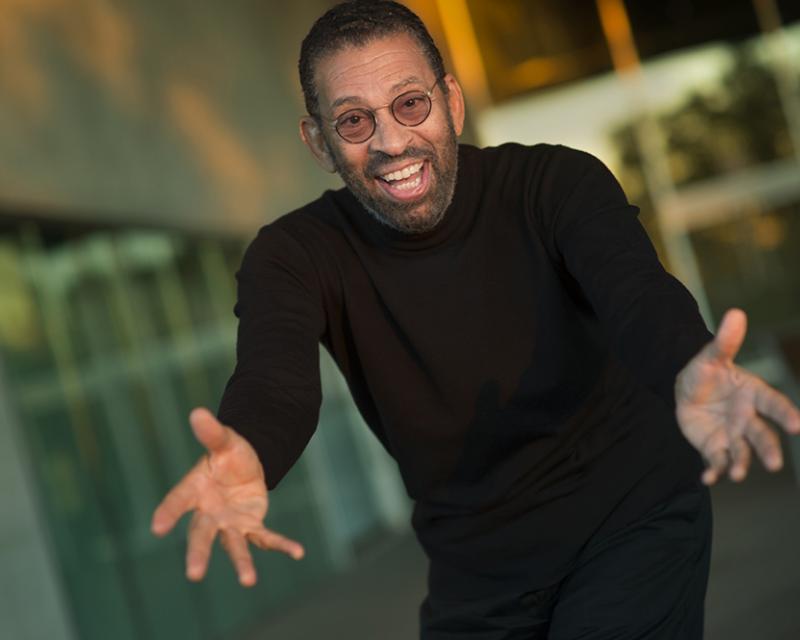 It was difficult to know who was having the most fun – performer Maurice Hines or the audience who came out to see his show. Hines, who by his own admission, is soon to be 75 years of age, made age disappear with an evening’s worth of verve and pure joie de vivre. And as if the talents of this multi-talented entertainer weren’t enough, he had the musical accompaniment of The Diva Orchestra, an all-female jazz band led by the remarkable drummer, Sherrie Maricle.

The Divas opened the show with a full-out blitz on Mary Lou Williams’ 1938 classic “Roll ‘Em.” The 10-piece divas played with a tight, hard swing, neatly filling the intimate space of the Triad Theater with a bold, crisp sound. The dapper, relaxed Hines entered to an introduction by show producer, Lee Summers, launching into a spirited “I’ve Never Been in Love Before.” It was apparent from the start that Hines was in his groove. He’s worked with The Divas before, principally on his show, “Tappin’ Thru Life.” The synergy is apparent, especially with Maricle, who, sitting at her drum kit behind him, has his back literally and figuratively. In fact, the evening was a mini version of “Tappin’ Thru Life,” with Hines’ memories of his life shared with humor, sincerity and plenty of song. Most of the numbers were delivered up-tempo in moderate swing, in the kind of beat good for toe tapping, if not dancing. Even the 1935 blues classic, “Everyday I Have the Blues,” with The Divas providing vocal backup, was injected with swing, reminiscent of the Grammy Hall of Fame version of Count Basie and Joe Williams. With these lively numbers, also including “Come Fly with Me,” “It’s Only a Paper Moon” and “Luck Be a Lady Tonight,” the Hines style was in top form. As a dancer first, movement is paramount. Hines’ feet may not have been tapping, but his body was in motion, feeling the tune as much as singing it. He’s theatrically expressive, so the drama of presentation goes into the mix that tells the story, for that’s what Hines ultimately achieves – the songs are a microcosm of the larger picture of the man.

Yet, Hines as entertainer doesn’t need bells and whistles to put across the material. Slow versions of “I’ve Grown Accustomed to Her Face,” “Smile” and “All the Way” proved he can interpret the lyric with simple gentility. With a house full of friends, colleagues and fans, his presentation was made more special by the intimacy of the space combined with a willingness to venture beyond the fourth wall, not intrusively, but with good-natured ease and playfulness. That sense of jocularity was in some of the material too, as with an audience participation gambit on “Love the One You’re With.”

Ever the showman, he affected a costume change midway through the show, giving The Divas another opportunity to show their considerable stuff. This entr’acte number was master percussionist Art Blakey’s hard bop arrangement of Juan Tizol’s “Caravan.” The Divas pushed the driving beat forward to its drum solo conclusion, where Maricle demonstrated skills so considerable as to place her in the pantheon of greats with names like Krupa, Bellson, Rich, Roach and Blakey himself. Hines’ closer was dedicated to his beloved brother, the late Gregory Hines, as well as to the audience that Hines declared had fed his spirit this night: “Too Marvelous for Words” – that perennial Richard Whiting/Johnny Mercer classic, which was followed by the play-out by The Divas of another classic, Duke Ellington’s “It Don’t Mean a Thing if it Ain’t Got That Swing.”