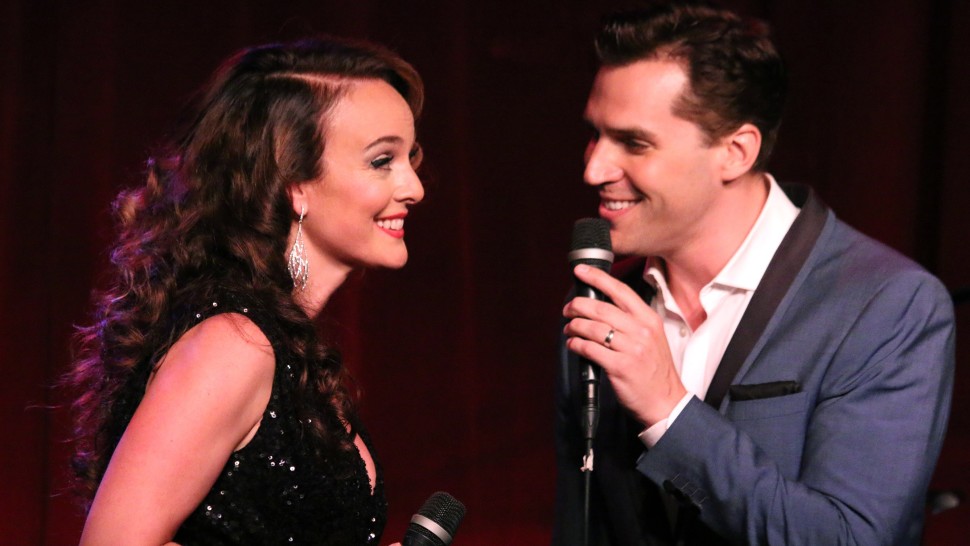 I first saw Melissa Errico and Ryan Silverman on stage together in 2014, when they paired opposite one another as Clara and Giorgio in the Classic Stage Company revival of Stephen Sondheim and James Lapine’s Passion. I then had the good fortune to see them as Sharon and Woody in the 2016 Irish Rep production of Burton Lane and Yip Harburg’s Finian’s Rainbow. Now it’s 2018, and they are performing a show of their own devising at Feinstein’s/54 Below devoted to romance songs from Broadway musicals. If they follow through, and keep getting together every two years to entertain with their musical talents, I have no problem with that at all. This particular show is breezy throughout, even if at times it comes across as if you are being serenaded by a favorite dotty professor, absent-mindedly taking you on some sort of freeform, comical lecture on theatre songs. This, mainly due to Melissa Errico’s flirty and flighty presence.

Currently starring as Daisy Gamble in On a Clear Day You Can See Forever (once again at her home-away-from-home at Irish Rep), Errico brings some of Daisy’s insecurity and attention deficient disorder to the proceedings, which isn’t necessarily a bad thing. And it must be said that she is in as strong and clear a voice as ever. Matched by the ease of Silverman’s ripe baritone, they sing forcefully in their duets, as well as in their accomplished solos. Opening with a medley of songs from Finian’s is always a good way to go and, as Errico wisely and wittily pointed out of Lane and Harburg, these were “Irish songs written by leftist, Jewish intellectuals.” She excelled both musically and lyrically on “That’s Him” from Kurt Weill and Ogden Nash’s One Touch of Venus (a role with which Errico is quite familiar), and when she brought in Silverman to duet on “Speak Low” from that same show, the entrance to musical theatre heaven swung open wide for business.

In his solos, Silverman commandingly took charge with “They Call the Wind Maria,” from Lerner and Loewe’s Paint Your Wagon, but less so with “Soliloquy.” I’m just not sure if Rodgers and Hammerstein’s nearly 8-minute song is the best use of time in a short show, even though I understand the temptation to do it. How often does an actor get cast as Billy Bigelow anyway?

Later in the evening, Errico gave us her rendition of “Another Winter in a Summer Town,” Michael Korie and Scott Frankel’s haunting song from Grey Gardens, which really made me want to see her tackle the role of Edie Beale sometime. And when he sang a bit of “How to Handle a Woman,” I daydreamed (or is it nightdreamed?) of what Silverman might do with King Arthur, if someone would cast him in it (even if his singing and good looks lends itself more to Lancelot).

Late in the show, a duet from Passion was a natural, but then why did it make me yearn more to instead hear Silverman and Errico sing George and Dot from Sunday in the Park with George? Probably because I prefer that particular Sondheim more, I guess.

The show’s musical director/accompanist Austin Cook, whose mane of hair and bushy beard gave him an air of someone from another era, brought a fine sensitivity to his singing actors, making him an ideal theatrical partner. He had his hands full, in the sense that the evening was one of organized chaos. No matter how much it may have been rehearsed, with Melissa Errico, you are never quite sure of what you’re going to get in this sort of setting. Robbie Rozelle is given a director credit, and even as an experienced hand in the cabaret world, I’m not sure there’s much he could have done to take a firm control of the proceedings once Errico was let loose with a microphone in her hand.

All that said, I don’t think the audience minded Errico’s brand of eccentricity one bit, especially as it contrasted nicely with Silverman’s steady charm. Broadway romance is in good hands with these two, of that you can be sure.