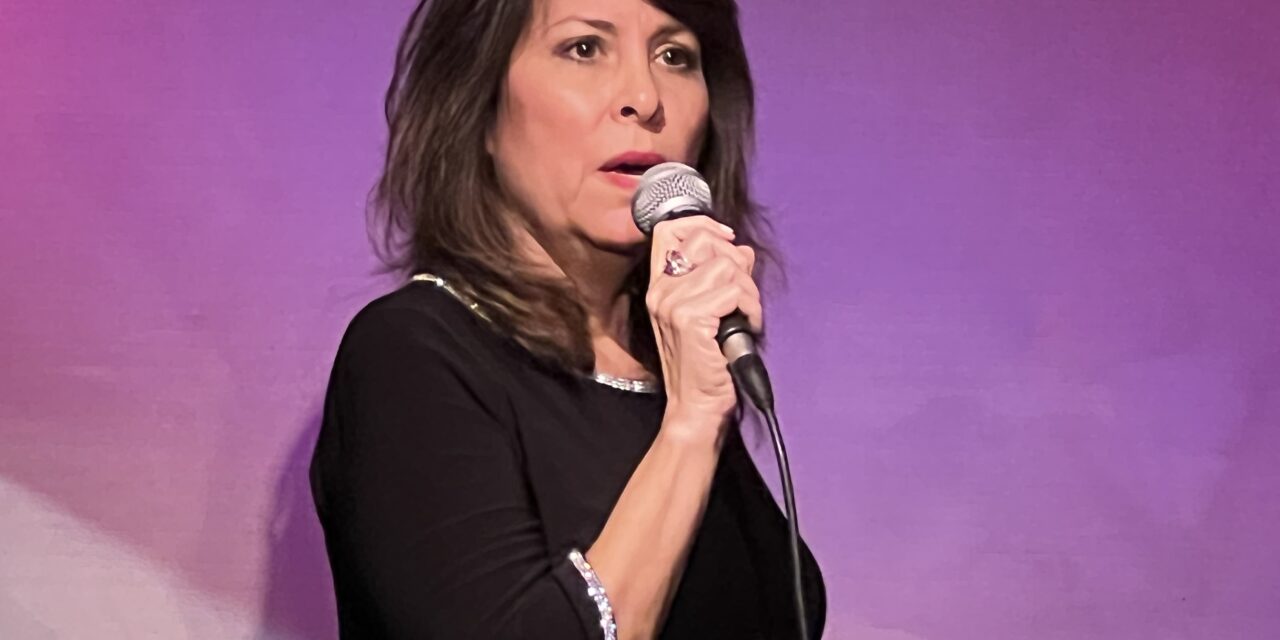 Meri Ziev is fairly new to the cabaret scene.  She made her cabaret debut back in October 2021 to a sold-out room, and brought the show back for two performances this weekend.  Meri, a Florida resident who grew up in New York, is a woman who has put marriage and motherhood first.  Aside from dabbling in local musical theater, it’s only now that she has taken the leap to truly showing the world her considerable talent.

It is a pleasure to listen to Meri, who has a vocal timbre quite similar to that of Dolly Parton’s, and often sings softly, but has reserves of vocal power when it counts.  She is also very attractive, and wore a black outfit outlined by rhinestone detailing and rhinestone sandals.  Along with some 15 songs, she told stories of marriage, motherhood and musical theater.

Meri is far from a one-note singer, and a clever medley of “Johnny One Note” (Richard Rodgers/Lorenz Hart) and “One Note Samba” (Antonio Carlos Jobim, English lyrics by Jon Hendricks) was delightful.

The somewhat forgotten “Rock and Roll Waltz” (Shorty Allen/Roy Alfred) was an early hit for Kay Starr.  It combines a waltz tempo with just a bit of rock and roll, and it was in that bit that Meri flaunted a powerful, bluesy voice.  If she ever unleashes this side of her performing skills for an entire song, watch out!  Pianist Christopher Denny ended the tune with a short quote from “The Tennessee Waltz.”

Don McLean’s paean to Vincent Van Gogh, “Vincent” (also known as “Starry, Starry Night”) was lovely, initially sounding like something out of a music box.  About halfway through, Meri found the emotional center of this unusual song.  Still, I couldn’t help but feel that unlike Van Gogh, the world was meant for one as beautiful as Meri.

A childhood friend with hearing loss inspired Meri to have a career as a speech pathologist.  A polyglot proficient in five languages, including sign language, she sang “Besame Mucho” (Consuelo Velazquez) in both English and Spanish.  Her unusual choice to combine “Blame It on the Bossa Nova” (Barry Mann/Cynthia Weill) with “I’ve Got a Lot o’ Livin’ to Do” was notable.

One highlight of the evening was “Meri’s Musical Theatre Mothers Medley,” which combined a number of seemingly disparate songs to tell the tale of her forays into musical theater in recent years, ranging from “When You’re Good to Mama” (from Chicago, by John Kander and Fred Ebb) to “Miss Baltimore Crabs” (from Hairspray, by Marc Shaiman and Scott Wittman), to the Elvis hit “Devil in Disguise” (Bill Giant, Bernie Baum and Florence Kaye).

Meri saved the show’s title song for last.  “New Words” (Maury Yeston) has a simple lyric, yet in Meri’s hands it became a powerful message song from a proud mother.  “Say what you wanna say and let the words come out,” she told us.

Meri Ziev is a radiant performer who almost literally glows.  “My optimism is my super power,” she announced at one point.  A lovely woman with a wonderful voice, warm, twinkling eyes and a wealth of stories and songs to share, Meri is the kind of performer who leaves every audience member feeling just a little bit better about the world than when they walked into the room.  Now that’s a successful show.