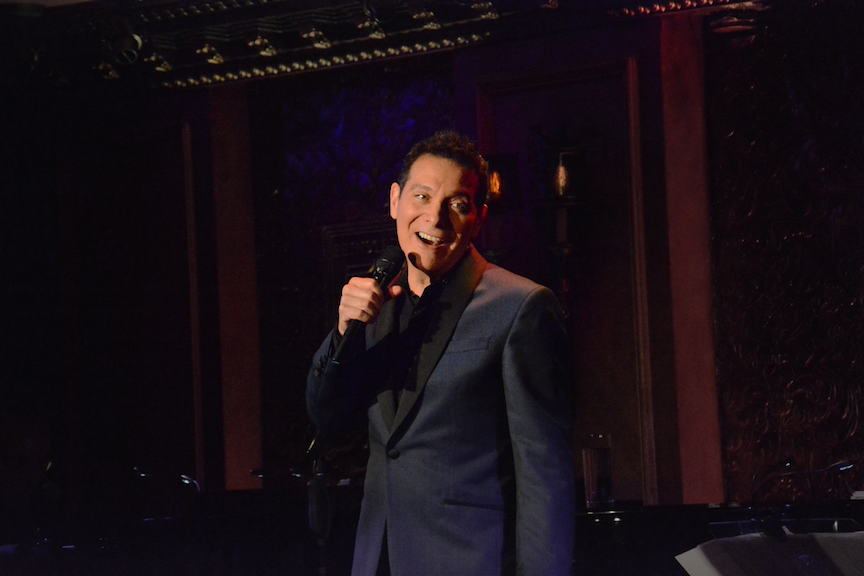 The one and only Michael Feinstein is back at his namesake Feinstein’s/54 Below thru September 3 ushering in ‘Showstoppers.’   Ordinarily, I’d take that to mean it’s a show about himself, a real showstopper whether seated at the piano singing, or front and center on stage backed by his fabulous musicians . . . the nimble fingered Tedd Firth on piano and musical director, along with the always animated Mark McLean on drums and the creative Phil Palombi on bass. But, no, this Showstoppers is about the songs made famous by the many entertainment icons who have literally hit home runs because of these iconic songs, making them part of musical history.

The smooth medley opening including “Hello, Young Lovers”/ “It’s All Right With Me”/ “Come Back to Me” provided a new exciting twist and turn of original arrangements, offering (as MF succinctly noted) “a favorite subterranean experience.”

As always, Mr. F is filled with tidbits of titillating information, offered up with a grin and knowing laugh, when speaking about Ethel Merman, Mary Martin, Shirley McLaine or Pia Zadora. A turn on Cy Coleman/Carolyn Leigh’s “Real Live Girl” (from Neil Simon’s Little Me), in waltz time, provided intensity, passion and that special MF charm. Dishing the dirt on the backstage drama between Danny Kaye and Gertrude Lawrence in the original Lady in the Dark, provided machine gun precision for MF’s rendition of “ Tschaikowsky (and Other Russians) ”and cheers from the audience.

Can’t remember the last time I heard the swinging “Is You Is or Is You Ain’t My Baby,” by Louis Jordan co-written with Billy Austin in 1944, a janitor turned songwriter, that proved to be a real treat!

Michael Feinstein’s run is filled with talented guests including Julia Goodwin, a winner of the Feinstein Songbook Competition, who made it very clear why she came out on top. Upcoming guests include Erich Bergen, John Lloyd Young and Betty Buckley.

Other showstoppers included the inimitable Sylvia Syms and Al Jolson. There was also a heartfelt tribute to Barbara Cook with Mr. Feinstein at the piano singing “Till There Was You / Goodnight My Someone.”

The updated, realistic version of Billy Goldenberg and Marilyn and Alan Bergman’s “Fifty Percent” (from Ballroom), was thrilling with a new urgency. Undoubtedly, Michael Feinstein is the man of a 1000 songs, a 1000 jokes and a delivery that is always filled with just the right amounts of spice sprinkled with lots of sugar.