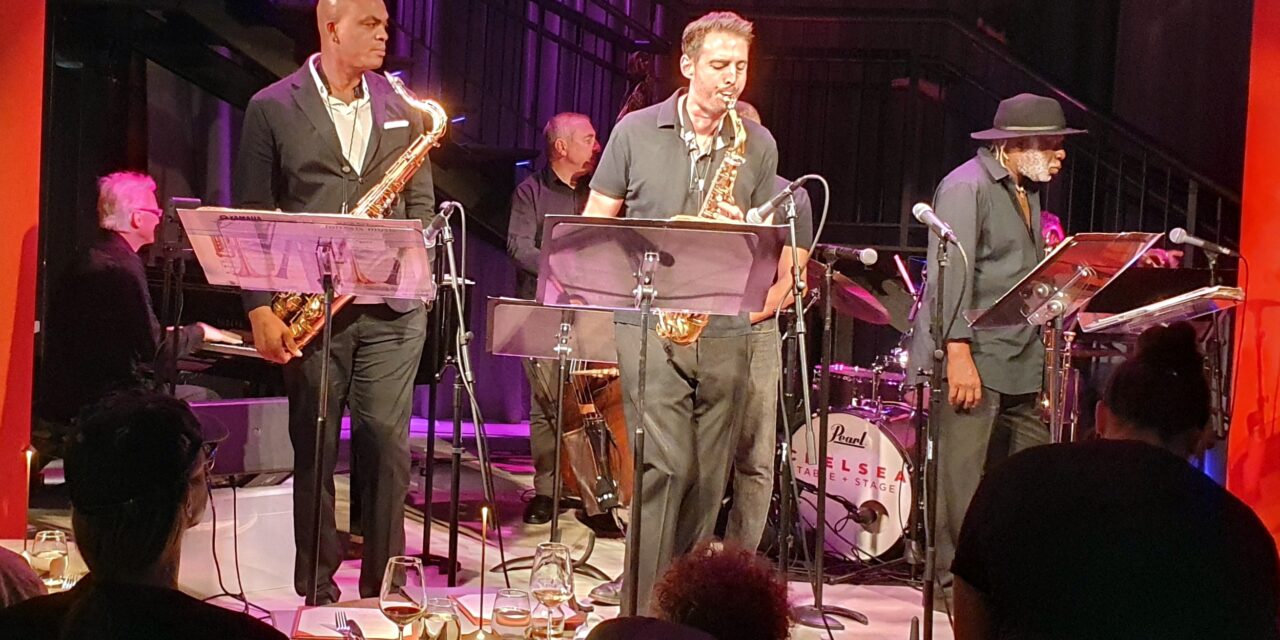 Hot jazz on a sultry Friday night in August.  That’s what patrons of Chelsea Table + Stage received from Mingus Dynasty. There are a handful of jazz musicians who are so well known even today that one name suffices.  One such player was legendary bassist Charles Mingus, or simply Mingus.  April 22nd would have been his 100th birthday.  Mingus didn’t make it past 56, but his incalculable contributions to jazz, particularly in taking the bass past its traditional place as part of the rhythm section and making it a solo, melodic instrument, continue to this day.  When a great bassist takes your breath away, know that Mingus paved the way for that solo.  (This reviewer is fortunate to have seen Mingus live on several occasions in the 1970s.)

Mingus Dynasty, formed in 1979 by Mingus’s widow, the record producer and band manager Sue Mingus, has kept the legacy alive.  The seven-piece band may differ in personnel on any given show; what remains constant is the catalog of some 300 compositions left behind by Mingus.  Each member of the band at this set was top of his class.

In six long-form pieces, Mingus Dynasty delivered a tasty chunk of the Mingus catalog.  The band opened with “The I of Hurricane Sue” (for Sue Mingus), a hot number featuring the front section of Wayne Escoffery on tenor sax, Brandon Wright on alto, and Frank Lacy on French horn, with a final section of sharp unison playing.

“Open Letter to Duke,” first recorded by Mingus in 1959, was one of several songs in this set arranged by composer and pianist Sy Johnson, who passed away only a month prior to this concert, at age 92.  Johnson worked closely with Mingus in the 1960s and 1970s.  The piece started with ferocious tenor sax riffs by Wayne Escoffery, but when the alto came in the mood shifted to a romantic, sexy love letter, slowing down gradually. The discrete rhythmic and tonal segments of fast and hot, then slow and sexy, were followed by what could be described as a trip to Carnival.

Author Janet Coleman, who wrote Mingus/Mingus: Two Memoirs with the late Al Young, came up to the stage to talk about Sy Johnson.  Ms. Coleman met Mingus at age 17 and commenced a decades-long correspondence.  Mingus even suggested to her that one day she might right a book called “Letters to and From Mingus.” The author relayed Johnson’s story of working with Mingus in a long-departed club called “Showplace” near Washington Square Park (now a laundromat).  The story (which appears in the book) had an angry Mingus banging on a table, showing Johnson, “This is how you do it!” As Johnson’s humiliation turned to fury during his solo, he began banging the bass end of the piano with his fists.  After the tune was over, Mingus exclaimed, “That white boy can really play that thing!”

“Portrait,” from the “Mingus Sings” album, also arranged by Sy Johnson, started with a long piano introduction before Frank Lacy sang the song with a growly baritone.  Lacy’s timbre suggests a man who has seen and lived it all.  Lacy, also known as Ku-umba Frank Lacy, is a triple threat on French horn, trombone and his distinctive vocals.

A great treat was having Philip Harper on trumpet for this set.  Harper, a veteran of the Jazz Messengers and the Mingus Big Band, added much verve to the set.

Mingus was also well-known as a civil rights activist.  Bassist Boris Kozlov spoke of Mingus’s strong action on social issues, in particular his move to integrate unions.  This part of his legacy was represented with “Fables of Faubus,” named after the Arkansas governor who in 1957 sent out the National Guard to prevent the racial integration of Little Rock Central High School by nine African American teenagers, in what became known as the Little Rock Crisis.  This was an equally fascinating and disturbing piece.  With Lacy’s French horn leading the piece, the front men chanted lyrics in a manner reminiscent of a political rally.  “Two, Four, Six, Eight…” filled the room with tension, a sense of danger and excitement.  It was a very effective device to build that tension.  The piece tells a story, with constant shifts in rhythm and tone.  Harper’s brilliant blues trumpet ending, played nearly entirely solo, and evoked a feeling of being cornered, trying vainly to fight, but they got him.

Mingus had a very close relationship with the writer Langston Hughes.  “Consider Me” utilized Hughes’ 1951 poem as lyrics against a slow, 3/4 be-bop blues.  This very powerful piece painted a vivid picture of the life of a young black man who grew up in the south but wound up in Harlem.  “Consider me, descended also from the mystery.”  It was also the most bass-centric piece in the set.