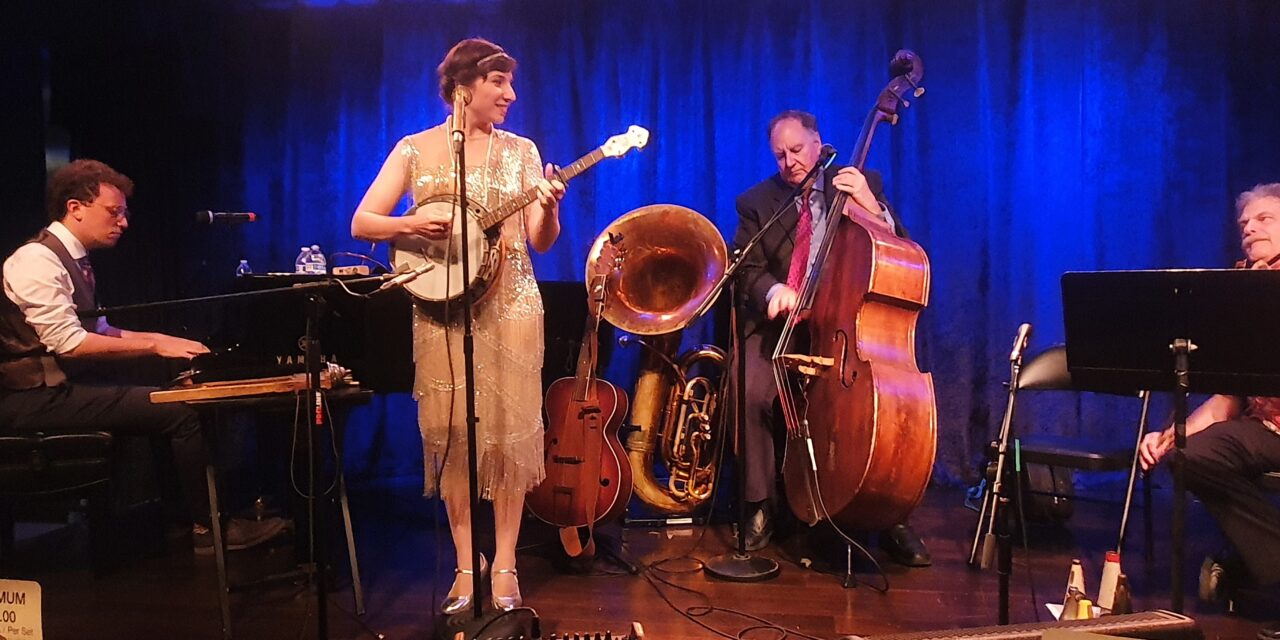 Ah, the Jazz Age of the Roaring Twenties, that romanticized, Great Gatsby era of music and mayhem, the days of hot jazz, ladies in flapper outfits and well-dressed men, before the Crash of 1929 brought it all to a screeching stop.  Gee, it sure was the bee’s knees, see, and now, in the not-so-roaring Twenties, everything old is new again, thanks to Miss Maybell & The Jazz Age Artistes.  The band, founded by Lauren Sansaricq (Miss Maybell) and her fella, ragtime pianist extraordinaire Charlie Judkins, both barely into their thirties, brought us back a century with a swell couple of sets of nifty vintage tunes (and instruments).  Many of the 15 songs were fairly obscure, which is part of the band’s charm, though “hot jazz” and ragtime fans would recognize most of them.  Theater Pizzazz covered the second of four substantially different sets played over two nights (an impressive feat).

Lauren (“Miss Maybell” going forward) played several instruments, all of Jazz Age vintage:  an acoustic archtop guitar, a banjo, a bazooka, and the washboard.  Charlie Judkins is a virtuoso pianist with specialties in ragtime, stride and blues.  The duo was accompanied by Brian Nalepka on bass, tuba and vocals, and Andy Stein on violin and saxophone.  Brian is an excellent harmonizer who speaks with an announcer’s voice.  Though a large fellow, his face was completely obscured when he played the tuba.

Lauren (“Miss Maybell” going forward) played several instruments, all of Jazz Age vintage:  an acoustic archtop guitar, a banjo, a bazooka, and the washboard.  Charlie Judkins is a virtuoso pianist with specialties in ragtime, stride and blues.  The duo was accompanied by Brian Nalepka on bass, tuba and vocals, and Andy Stein on violin and saxophone.  Brian is an excellent harmonizer who speaks with an announcer’s voice.  Though a large fellow, his face was completely obscured when he played the tuba.

Miss Maybell appeared to have walked out of a time machine, “dolled up” in a shimmering, layered, flapper outfit and a feather fascinator, opened with a peppy “Ida, Sweet as Apple Cider” (Eddie Leonard), a 1903 tune that was later a big hit for Eddie Cantor.  Charlie, dressed like a character in “The Sting,” played an energetic stride piano.

Miss Maybell first showed off her “one-gal band” skills in “The Sheik of Araby (Harry Smith, Francis Wheeler, Ted Snyder, 1921).  The singer played an authentic Bob Burns Bazooka – a unique, brass kazoo-like contraption– as well as a small washboard worn around her neck for percussion.  The washboard, with a bell affixed to the top and a small cymbal at the bottom, served as percussion on several songs.  (Fun fact:  while washboards are most commonly used today for making music, they can actually be used for washing clothes.)  These instruments may look like novelties, but they are utilized for their unique musical sounds, not played for laughs.  Miss Maybell’s dramatic contralto voice has a distinctive tone that is perfect for the material, and seems somewhat surprising coming from such a petite woman.

Brian, who sang harmonies on several tunes, took the lead vocal on “Where’d You Get Those Eyes?” (Walter Donaldson, 1926), which Miss Maybell noted was sung by Betty Boop in a cartoon.  For the following song, “Let’s Get Loose,” a bluesy ragtime number, the band showed great versatility, Miss Maybell switched to guitar, Brian switched to tuba, and violinist Andy Stein switched to sax.

The ragtime instrumental “That’s a Plenty” (Lew Pollack, 1914) would sound familiar to devotees of Jackie Gleason’s variety shows, where it was often used in blackout sketches.  Charlie, an authority about the music of Tin Pan Alley and ragtime, gave a history lesson of sorts, noting that the song was first published only a block away.

Among many highlights was “It Looks to Me Like a Big Night Tonight” (Egbert Van Alstyne/Harry Williams, 1908), which Miss Maybell described as “a song about drinking too much.”  Appropriately, it was reminiscent of an Irish ditty.

Special guest Danny Tobias, a noted trumpeter, came out for a very spirited “At the Jazz Band Ball,” an instrumental based on “Shine on Harvest Moon” that dates to 1917.  Mr. Tobias stayed with the band for the remainder of the set.

The final full song of the night was “Minnie the Mermaid” (Buddy De Sylva, 1923), with lyrics that sound like an episode of SpongeBob SquarePants, with couplets like:

“And ev’ry night when the star fish came out,
I’d hug and kiss her so.
Oh what a time I had with Minnie the mermaid,
Down in her seaweed bungalow.”

It was a terrific arrangement, with solo opportunities for the entire band.

For a short but delightful encore, the band performed “Hello! Ma Baby” (Joseph E. Howard, Ida Emerson), which has the distinction of not only being the oldest song played (1899), but the most well-known to today’s audiences, thanks to a “singing frog” from the legendary 1955 Warner Bros. cartoon, “One Froggy Evening,” where the high-stepping Michigan J. Frog, wearing a top hat and a cane, sang it.  The tune left the Birdland audience posilutely hip to the jive! The band made a quick 23 skidoo out of the joint, which was still jumping.