“Mr. Harris and Mr. Edwards” – The Boys are Back in Town! 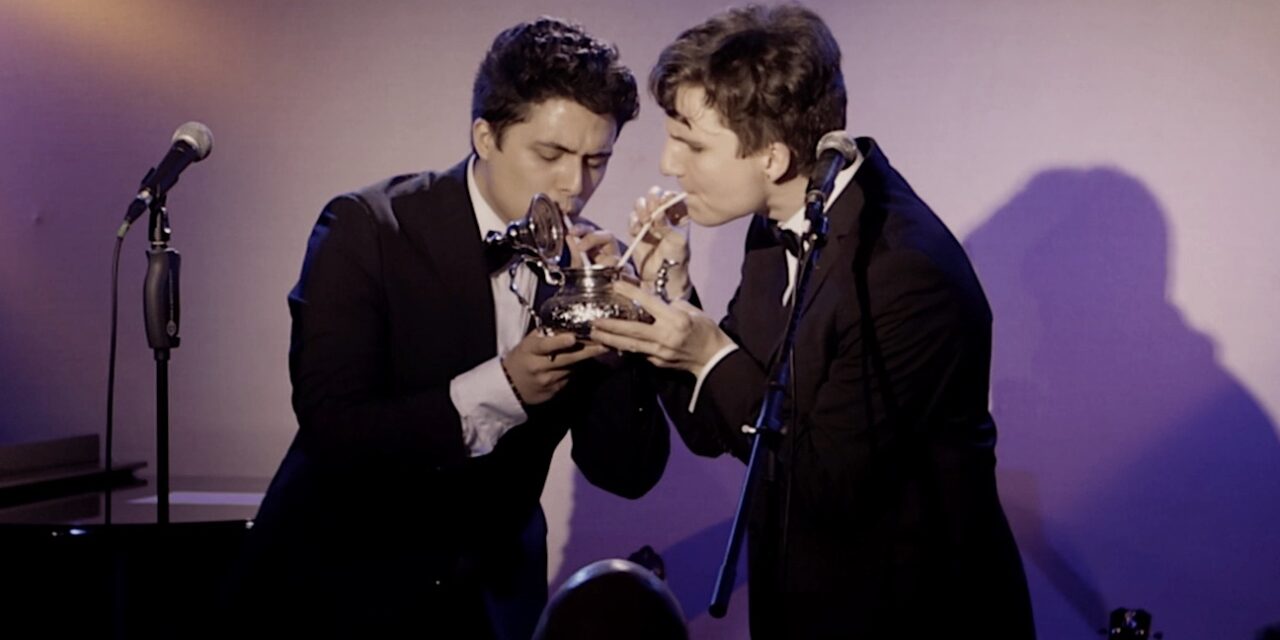 The title gave little hint of what to expect.  The only clues were the instruments.  Neatly set up at center stage before showtime were a four-string banjo, a resonator tenor ukulele, a baritone ukulele, and a mysterious brass horn contraption.  It would be an unusual show.  In keeping with the formal title, they shall be referred to by their honorifics throughout this piece.

“Mr. Harris and Mr. Edwards Theme Song” (written by Bryce Edwards) opened the show for these two young men, both 21, both out of time, though of different eras.  Quintin Harris might have been a suave, dark-haired singing sensation of the 1940s, while Bryce Edwards, whose wholesome appeal was like that of a young Crispin Glover in Back to the Future, with the wide-eyed earnestness of “Alfalfa” from “The Little Rascals, and Tiny Tim’s arcane musical knowledge, was seemingly lifted off a 1920s sheet music cover and delivered whole to Don’t Tell Mama on November 20th. Chums since the third grade, each brings completely different gifts, and, together, they make for a delightful 75 minutes of jazz and vaudeville.

Quintin Harris, a jazz pianist and singer with considerable skills, comes from a musical family.  His pianist mother, Renée Guerrero, accompanied the duo whenever her son needed to perform center stage with Mr. Edwards.  His sister is also a performer, known professionally as Artemisia Lefay.  Bryce Edwards is a quirky entertainer who sings, plays banjo and ukulele, has a penchant for forgotten Tin Pan Alley songs, and owns a huge collection of 78 rpm records. This 17-song show gave ample opportunities for Mr. Harris and Mr. Edwards to score with music, stories, and light comedy, with several smart duets and solo pieces.

These two fellas have been compared to Dean Martin and Jerry Lewis, as their flyer suggests, but that’s inaccurate.  Lewis’s manic, child-brat persona was entirely a put-on, and he was by most accounts a nasty man off the stage and set.  Mr. Edwards’ big, expressive blue eyes, spit curls and persistent smile are just part of his genuine charm and sweet nature.

Dressed in tuxedoes and bowties, with Mr. Harris’s mother backing them (Mr. Edwards with a tiny “sopranino” ukulele in hand) they sang “Yes, We’re Back,” followed by the foppish “Style” (Sammy Cahn/James Van Heusen) from the “Rat Pack” movie Robin and the Seven Hoods.

“Alone Together” (Arthur Schwartz/Howard Dietz) was a star turn for Mr. Harris, who bears some resemblance to a young Vince Edwards.  He possesses a rich, lyric baritone voice, in contrast to Mr. Edwards’ sweet, sincere tenor.  With his fine playing and almost dreamy singing, this might have been a hit record in another era.

For what Mr. Edwards described as a “deep dive” into the Nat King Cole catalog, the boys sang what he jokingly described as a “vegan” song, “Save the Bones for Henry Jones (‘Cause Henry Don’t Eat No Meat)” (Danny Barker/Michael Goldsen).  The song’s obscure reference to Henry Aldrich (“Henry?”  “Coming, mother!”) is a fun bit of trivia.

It was not until “Everybody Loves My Baby” (Spencer Williams/Jack Palmer) that the horn contraption made its way into the act.  An antique kazoo rigged to be worn around the neck, it is a Gatsby-era stand-in for the Bob Dylan harmonica and neck holder, allowing Mr. Edwards to simultaneously play banjo and kazoo.

A charming piece of business had the boys “having tea”, with a silver tea set, and is based on a Phil Harris and Dean Martin televised adaptation of Mr. Gallagher and Mr. Shean (Ed Gallager and Al Shean) – the inspiration for their act.  A specialty song, “Oh Mr. Harris?”, had them singing bon mots to one another while Renée Guerrero played piano.  Mr. Edwards is the more comedic of the pair, and has good timing.

Ella Fitzgerald and Louis Armstrong’s recording of “Under a Blanket of Blue” (Jerry Livingston/Marty Symes and Al J. Neiburg) was what began Mr. Harris’s journey into jazz.  Here, the boys took turns on lead vocals, along with some fine harmony, with the assistance of the excellent bassist Robert Fernandez.

The duo specializes in recreating famous duets.  Besides the earlier Sinatra material, there was the Barbra Streisand and Judy Garland medley of “Happy Days are Here Again” and “Get Happy” (Milton Ager/Ken Welch; Harold/Ted Koehler), and they closed the show the Sinatra/Sammy Davis version of “Me and My Shadow” (Billy Rose/Dave Dreyer).  While they updated several references from this piece, references to long-gone Sinatra hangouts Jilly’s and Toots Shor remained.  Still, it’s always a fun piece.

Quintin Harris and Bryce Edwards should be on your radar.

The Boys are Back in Town!