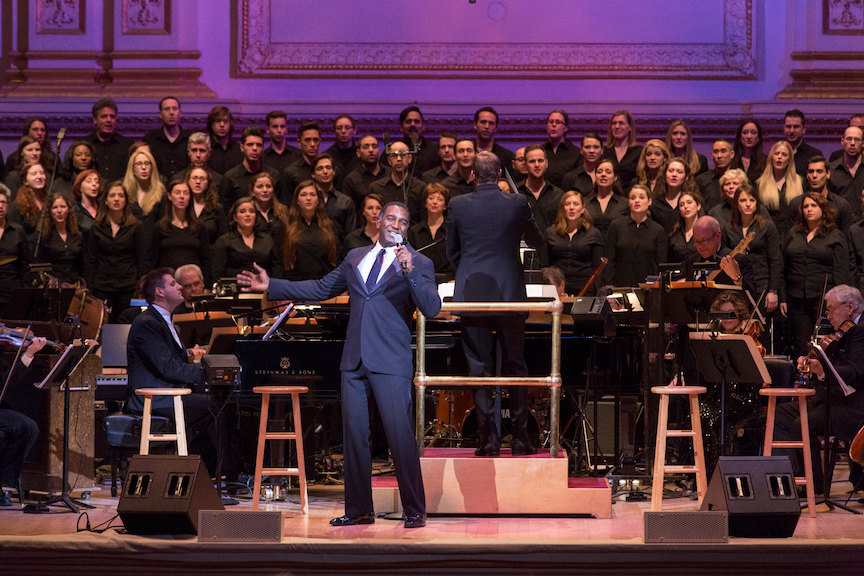 Emmy, SAG, and Tony Award nominee Norm Lewis premieres a new solo concert program with The New York Pops, led by Music Director and Conductor Steven Reineke, on Friday, March 4, 2022 at 8:00 p.m. in Stern Auditorium / Perelman Stage at Carnegie Hall. One Night Only: An Evening with Norm Lewis highlights Norm’s illustrious career on stage, including his leading turns in Les Misérables, The Phantom of the Opera, Porgy and Bess, and Sweeney Todd.

Michael Feinstein Reimagines Gershwin Songs: Craft Recordings is thrilled to announce Gershwin Country: a brand-new album from the GRAMMY®- and Emmy-nominated entertainer Michael Feinstein, who reimagines the classic songs of George and Ira Gershwin through the contemporary lens of country music. Executive produced by his longtime friend and collaborator Liza Minnelli, the albumpairs Feinstein with some of the biggest names in country music, including Dolly Parton, Alison Krauss, Brad Paisley and Rosanne Cash. Available for preorder HERE on CD and digital, Gershwin Country hits stores March 11—with a portion of all proceeds benefitting MusiCares.org a partner of the Recording Academy® that provides a support system of health and human services across a spectrum of needs, including physical and mental health, addiction recovery, preventative clinics, unforeseen personal emergencies and disaster relief to the music community.
Beginning today, fans can stream the advance single, an expressive performance of “Someone to Watch Over Me,” featuring 27-time GRAMMY-winner Alison Krauss. From Gershwin’s 1926 musical Oh, Kay!, the tune became a No.2 hit alongside the Broadway show and has since been recorded more than 1,800 times by such artists as Frank Sinatra, Sarah Vaughan, Willie Nelson, Barbara Streisand and Linda Ronstadt.

FEINSTEIN’S/54 BELOW, Broadway’s Supper Club, presents 54 Sings Lorde (the chart toping music of artist Lorde) on January 26th, 2022 at 9:45pm. Get ready for an unforgettable celebration of one of the music industry’s most prolific stars with some of Broadway’s hottest stars from Six, Jagged Little Pill, Diana, and more!

Nélida Tirado began her formal training at Ballet Hispanico of New York at the age of six. She was invited to tour the U.S. with José Molina Bailes Españoles and work as a soloist in Carlota Santana’s Flamenco Vivo, soloist/ dance captain of Compañia Maria Pages and Compañia Antonio El Pipa, performing at prestigious flamenco festivals and television in Spain and throughout France, Italy, UK, Germany and Japan. She has performed in Carmen with New York’s Metropolitan Opera and was the featured flamenco star in Riverdance on Broadway and touring companies. Tickets at chelseatableandstage.com

FEINSTEIN’S/54 BELOW presents Elaine Dame in The Lady Lyricists – Queens of Tin Pan Alley on Sunday, February 6th at 9:45 PM. Though not as famous as their male counterparts, women lyricists like Dorothy Fields, Carolyn Leigh, and Betty Comden made vast and varied contributions to American popular songs, paving the way for future female artists, and making their mark in a male-dominated field. Join celebrated Chicago-based jazz singer Elaine Dame as she lauds the artistry of our well-loved and legendary lady lyricists. Featuring pianist Ben Paterson and bassist Luke Sellick. www.54Below.com

Steven Brinberg (Simply Barbra), Award-winning singer and actor returns with “SIMPLY BARBRA – – Love Is The Answer, a Valentine’s Day show” to The Green Room 42, 570 Tenth Avenue at 42nd Street (in Yotel Hotel) NYC on February 10th at 7:00 PM (doors open at 6:00 PM).  The show features great love songs, Streisand classics and a Sondheim tribute with Christopher Denny as musical director and Nikita Burshteyn, star of the upcoming musical “Romeo and Bernadette” as a guest in the show. All guests, staff, and performers/musicians must show proof of vaccination for admittance. Tickets are only $29, 49 & $69 and they are available now at  https://thegreenroom42.venuetix.com/show/details/1gAkTTwQtwB4okZFyg91/1640131200000