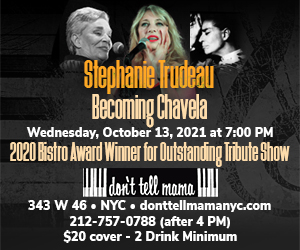 Stephanie Trudeau at Don’t Tell Mama October 13 at 7pm – Chavela: Think Of Me – Songs & Stories Of Chavela Vargas 2020 Bistro Award Winner For Outstanding Tribute Show. Iconic Mexican singer, Chavela Vargas, a trailblazer who constantly broke the mold, was edgy in the 1990’s and is totally relevant today because her story pushes so many hot topic buttons: gender issues, gay rights, immigration, and Mexican culture. Songs of lust and longing and stories of her friendships with Diego Rivera, Frida Kahlo, Liz Taylor and Pedro Almodovar will intrigue and entertain. Tickets HERE.

Kati Neiheisel celebrates the musical legacy of the Carpenters at Pangea Oct. 15, Oct. 30, Nov. 16 at 7 pm and on Dec. 5 at 1 pm with musical director Gregory Toroian and Skip Ward on bass and David Silliman on drums. She is directed by Lina Koutrakos. www.pangeanyc.com

Original Co-star in Broadway’s longest running musical Chicago, David Sabella celebrates the 25th Anniversary of the show and the music of Kander of Ebb, with a special behind-the-scenes look at the show’s creation and his long history as ‘Mary Sunshine.’ His show 25Chicago25, can be seen live at Feinstein’s/54 Below on November 17 at 7 pm as well as live-streamed on BroadwayWorld.com. Live Tickets: http://Live Tickets: www.54Below.com/…/david-sabella-sings-kander-ebb…/ Live Stream Tickets: www.54Below.com/SabellaLIVE

Maria Corsaro will be at Pangea on October 2 & 16 at 7 pm and November 7 at 2 pm and December 9 at 7 pm with a new show You Taught My Heart to Sing, featuring songs of Chick Corea, McCoy Tyner, Bill Evans, David Foster, Chuck Mangione and more. With her is Gregory Toroian and his Trio, including Skip Ward on bass, David Silliman on drums. The show is directed by Sue Matsuki. www.pangeanyc.com