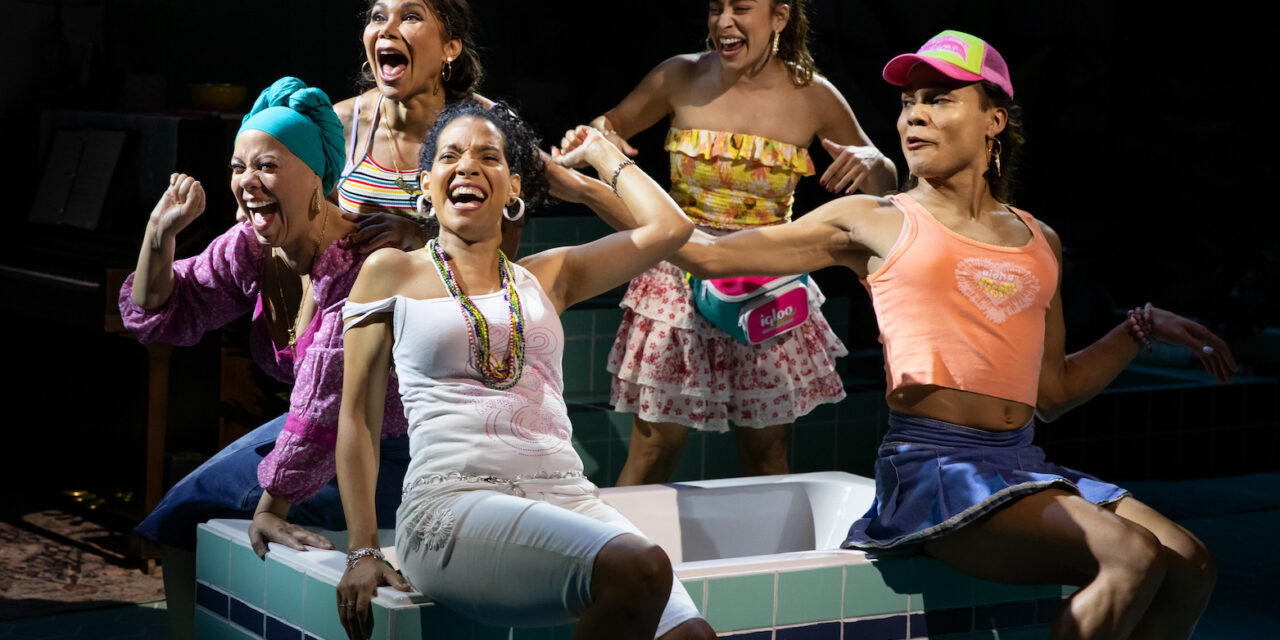 Judging by the last three shows I saw, dialogue drama, like democracy and the economy, is in serious trouble. After seeing the one-hander Albert Camus’ The Fall and the two-hander Chester Bailey I didn’t expect the six-hander My Broken Language, by Pulitzer Prize-winner Quiara Alegría Hudes (Water by the Spoonful), to be yet another in the storytelling, tell—don’t show—category of contemporary drama. Partly, this is because My Broken Language is based on Ms. Hudes’s 2021 memoir of the same name.

Ms. Hudes’s play, which she also directed, and which is described as “Blending monologue, literary reading, live music, and movement,” is an autobiographical, coming-of-age narrative of her growing up as a Philly Rican grrrl in the West Philly barrio. Its focus is on the women in her family, especially her older cousins, who influenced her. They belong to a Puerto Rican family that suffered great grief as beloved members, one after the other, succumbed at an early age to the ravages of AIDs and drugs, but it’s also a family whose upbeat joy and delight in living and loving sustained the writer as she took advantage of her writing gifts to blossom in school and become a Brown-educated playwright.

Performed in a monologic manner that recalls Ntzoke Shange’s “choreopoem” format in for colored girls who have considered suicide / when the rainbow is enuf, its dialogue-less narrative is presented by a diverse cast of Latinx performers who alternate playing the Author in a series of episodes, set in 1988 (age 10), 1991 (13), 1993 (15), 1994 (16), 1995 (almost 18), and 2008 (26). When not playing the Author, called Qui Qui by her cousins, the others represent either aspects of her personality or relatives in what she dubs the “Perez” family.

The women we meet speak in hip, sassy, streetwise, Spanish-inflected sentences. One turns out to be illiterate, a product of a dysfunctional education system, although the gifted central character based on the playwright flourishes in a magnet school where she awes her teacher by saying that Willy Loman’s tragedy in Death of a Salesman is his discovery that he’s “average.” I suspect that some auditors may have different opinions.

Pulsing with feeling, but absent of drama—in the sense of conflict, suspense, and stakes (unlike for colored girls)—Ms. Hudes revels in language, often self-consciously, as she grapples with what she claims to be the insufficiency of English to express her family history. How, she wonders, can she connect her language to her experience? Throughout, a female pianist, Ariacne Trujillo-Durand, expertly provides fine musical accompaniment, not only with contemporary, Hispanic-influenced tunes and rhythms, but passages from Chopin as well.

The effort, delivered with over-the-top histrionic emphasis, sounding not much different from a hipster poetry slam, allows for considerable choreographic invention, devised by Ebony Williams. Several moments— like when the electric Yani Marin, dressed in tight white, portrays a woman in the throes of ritual possession—are striking demonstrations of physical commitment. They fail, though, to supply more than momentary visual distraction to material that could almost as well be read from a podium as performed on a stage.

Ms. Hudes’s journey introduces: a trip in an old jalopy (or “hooptie”) with her beloved older cousins to New Jersey’s Six Flags theme park, where Qui Qui is too sick to go on the rides; her first period; her mother’s becoming possessed while channeling a deity (orisha) of the Lukumi (a.k.a. Santería) faith; her high school interpretation of Willy Loman; a close relative’s death; her discussion of famous art works (using overhead projectors that blur more than they illuminate); her anger at Marcel Duchamps’s “Étant donnés,” a painting focused on a vagina; her eclectic literary interests; a “rice ballet”; and so on. Finally, her first play (apparently completed in a state of possession beyond her control), based on her overweight sister, is produced at Brown, which helps bring them together.

In the course of her rambling, during which Qui Qui name drops famous authors and artists, almost as if to demonstrate how well-educated she is, she aspires to create a museum or a library to memorialize the women in her family, who have faced life with great fortitude, even though she thinks the family may be cursed. “We must be our own librarians!” she insists. Aside from their spirited joie de vivre, however, it’s not that easy to see what it is about these women that needs memorializing in a library.

None of this is meant to detract from Ms. Hudes’s verbal gifts—some of the writing being quite memorable. For example her riff on the fleshy distinctions among the female bodies she’s seen (“trapped in perma-bloat,” unlike the mostly trim physiques we see on stage), or the particularly vivid, even funny, segments on pubic hair and nipples.

Set designer Arnulfo Maldonado, seeking a generalized environment that can serve for many locales, has created what seems like a bathhouse setting, with actual tiled bathtubs used for multiple purposes. There’s even a mint green, tiled floor, with a drainage plate at center. Maybe I missed the reference, but surely there’s a metaphor involved that washed right by me. It’s pretty though, and Jen Schriever does her usual best at illuminating it, while Dede Ayite’s everyday cool grrrl costumes, all of which remain the same throughout, do what they can for a play that covers 16 years.

My Broken Language. Through November 19 at The Signature Theatre (480 West 42nd Street, between Ninth and Tenth Avenues). www.signaturetheatre.org