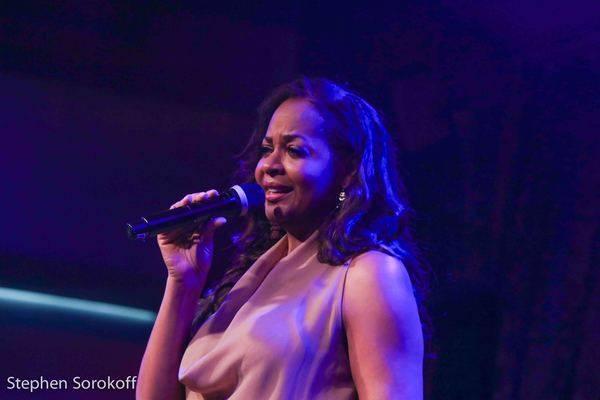 Finding the right tone for the hectic, puzzling, madcap world of New York City would be the challenge. The City inspires. It triumphs. It demands. Yet, in the end, the dynamic metropolis that is New York sounded so right at Birdland Theater, as interpreted in “New York: Big City Songbook.”

With glamor, heartache, and bits of humor, the evening unfolded. Co-created and directed by Mark Waldrop (Howard Crabtree’s When Pigs Fly), the show relied on standards by Cole Porter and Kander and Ebb, among others. There were also a few surprises. La Tanya Hall (Dreamgirls, Promises, Promises) began the evening with “Call of the City.” Nick Ziobro followed with a classic performance of “Manhattan,” with music by Richard Rodgers and Lorenz Hart. Like a young crooner right out of a movie set, Ziobro knows when to chew his words and when to let his tone sail with exceptional resonance.

Lyrics can make an evening. Creator, Writer, and Host Deborah Grace Winer was the Artistic Director of the 92Y’s Lyrics and Lyricists for over nine years. For “New York: Big City Songbook,” she chose to share stories about how to get around New York, by bus, train, or plane. They were remarkably fitting. New York is a huge City that Winer seems to have conquered. While she’s an informative guide, it becomes obvious that it is her selections that make the evening so satisfying.

Narration as connective tissue continued with uptempo tunes like “Boy from New York City” and ballads like Billy Joel’s “New York State of Mind.” The newer Birdland Theater seats fewer people than the upstairs space. With flawless acoustics, a precisely lit stage, and plenty of room for tables, it’s something of a reviewer’s paradise. It’s the right place for a little bit of scat, a little bit of storytelling, and a great appreciation of the locations that make New York City so extraordinary.

A nice departure for the evening was “Double Parking,” written and sung by Jay Leonhart (bass and vocals). Everyone has a story. With beginnings in Towson, Maryland, it seems that New York City stole his heart and made him want to sing. On the piano was Joe Davidian. Great arrangements by John Oddo.

Cole Porter’s “I Happen to Like New York,” is more of demand from Klea Blackhurst (Everything The Traffic Will Allow). With five solos on the set list, the piano was nice and crisp for her troubled yet funny “Waiting for the B Train,” a less recognizable song, with music and lyrics by Christine Lavin. The keys zip along, with an almost fairytale quality, and stanzas bring to life what is envisioned moment after inhabited moment, when the singer believes she has discovered a puppy on the subway tracks. When the audience learns that it was a wig in the end, it’s more than a relief.

Tuning to the room, Klea Blackhurst blasted out her last solo, the gutsy “Ring Them Bells.” Is hearing so many great musical theater songs in one evening so satisfying? Perhaps. While the audience didn’t spontaneously break out into song, the entire evening made me want to dance, and appreciate all that “New York, New York” has to offer.