The New York Pops Presents: Under the Mistletoe – Ashley Brown 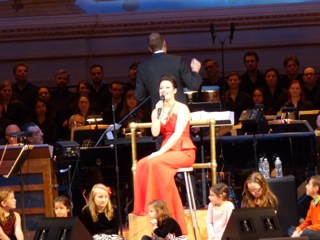 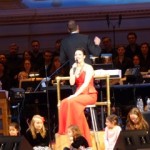 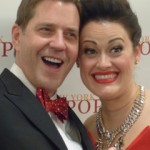 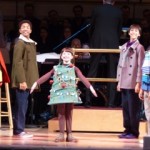 Tis The Season To Be Jolly

At about minute five into this year’s New York Pops holiday concert, Under the Mistletoe with Ashley Brown, Ebenezer Scrooge himself would have been toe-tapping with fulsome Christmas spirit. Beneath the energetic baton of Pops Music Director/Conductor, Steven Reineke, Deck the Halls rose to the famed rafters of Carnegie Hall’s Stern Auditorium/Perelman Stage with great, rousing gusto. The 50-plus musicians on stage played with excellent balance and intonation, coming to a cheerful conclusion with the powerful addition of Judith Clurman’s Essential Voices USA. The literal and figurative tone of the evening had now been set.

Sporting a bright red bow tie and matching pocket square, Reineke, who also arranged many of the program’s works, demonstrated his playful, enthusiastic theatricality and welcoming, warm charm throughout the evening. Reineke is astute and accomplished in the pops concert tradition, so he knows a thing or two about pleasing an audience. Close your eyes and you could imagine you’d been invited to the man’s home for a celebratory quaff of eggnog.

Maestro Reineke crafted Under The Mistletoe with old friend, Ashley Brown, the musical theater star who originated the role of Mary Poppins on Broadway. The duo created a festive evening with a solid equilibrium of humorous and sentimental moments. His repartee and bonhomie with Brown seemed unbeguilingly genuine, and their renditions of classics such as It’s the Most Wonderful Time of the Year and Winter Wonderland were as satisfying as a cup of hot cocoa on a chilly winter’s night. Ashley Brown’s range, vocally and interpretively, was deftly showcased in a wistful rendition of the World War II classic, I’ll Be Home for Christmas, I Wonder as I Wander, and The Secret of Christmas, a tribute to Ella Fitzgerald.

Judith Clurman, conducting her Essential Voices USA, provided a tightly balanced sound and choral volume with Little Bolero Boy, with its mounting layers of aural complexity and crescendo to a stirring conclusion, as well as Jingle Bell Rock, and Wishes and Candles (written specifically for the chorus).  A second-half tribute to Vince Guaraldi and A Charlie Brown Christmas featured an evocative rendition of the now classic Christmastime Is Here.

The concert’s first half closed with the playful, Holiday Hits Medley (Top 40 Radio hits), with orchestra and chorus, and an almost giddy Ms. Brown. The centerpiece of the medley, All I Want For Christmas Is You, gave Brown ample opportunity to riff on pop diva, Mariah Carey, which pleased a laughing Reineke no end.

The post-intermission themes of Under the Mistletoe were of the more compelling sort. Brown invited the children of the audience to the stage for Yes, Virginia, a moving affirmation of the authenticity of Santa and the meaning of Christmas. The six youngsters at her feet were rewarded at song’s end with the appearance of an elf and Santa himself.

Before a heartfelt Grateful, Brown shared her gratitude for family (who were present in the hall, en masse), friends, and accomplishments, on a very intimate level. “Dreams happen,” she said several times. Brown also shared the story of her first public singing experience – in church, at age nine, back home in Florida. Her adult rendition of the same carol, O Holy Night was delivered with a clear, sure soprano.  As the last note of the song rang out, Brown’s captivated audience sprung to its feet in mass approval, causing Reineke, with some amusement to declare, “wait, we’re not finished yet!”

The finale, a Christmas Sing-along, with the Pops orchestra, Brown, the Essential Voices USA, elf and Santa, brought the elated audience to their feet a second time. With Christmas tunes and jollity dancing in their heads, the prospect of exiting into a cold December didn’t seem so daunting after all.