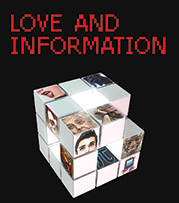 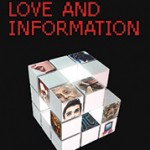 Renowned playwright Caryl Churchill returns for her seventh American premiere at New York Theatre Workshop (which have included acclaimed productions of Far Away and A Number) with a theatrical kaleidoscope exploring more than a hundred characters as they try to make sense of what they find out.

Churchill teams up with award-winning director James Macdonald (A Number, Blasted, Top Girls) to create what The Observer heralds as the “play that everyone should see.” Love and Information,which was first produced at the Royal Court Theatre in 2012 reaffirms Churchill’s continued ability to reinvent herself as a playwright and keep her finger on the pulse of contemporary life while featuring her signature wit, candor and nimble use of language.

The scenic design for Love and Information is by Miriam Buether; costume design is by Gabriel Berry and Andrea Hood; lighting design is by Peter Mumford, sound design is by Christopher Shutt.

Six of Caryl Churchill’s previousplays have made their American premiers at New York Theatre Workshop including A Number, Far Away, Mad Forest, Owners, Traps, and Light Shining inBuckinghamshire. Downstairs, her first play originally staged in 1958, was written while she was still at university and won an award at the Sunday Times National Union of Students Drama Festival. She wrote a number of plays for BBC radio including The Ants, Lovesick and Abortive. The Judge’s Wife was televised by the BBC in 1972 and Owners, her first professional stage production, premiered at the Royal Court Theatre in London in the same year. Churchill served as the Resident Dramatist at the Royal Court Theatre from 1974-1975. With theatre groups Joint Stock and Monstrous Regiment, she wrote Light Shining in Buckinghamshire, Cloud Nine, Three More Sleepless Nights, Fen and A Mouthful of Birds. Top Girls was first staged at the Royal Court in 1982, directed by Max Stafford-Clark. Serious Money was first produced at the Royal Court in 1987 and won the Evening Standard Award for Best Comedy of the Year and the Laurence Olivier/BBC Award for Best New Play. More recent plays include The Skriker, Seneca’s Thyestes, a new version of August Strindberg’s A Dream Play and The Public’s recent Drunk Enough to say I Love You?, directed by James Macdonald, which premiered at the Royal Court Theatre in 2006. Caryl Churchill lives in London.

Tickets may be purchased online at nytw.org, 24 hours a day, seven days a week or by phoning Ticketmaster at 800-982-2787.  For exact dates and times of performances, visit nytw.org.