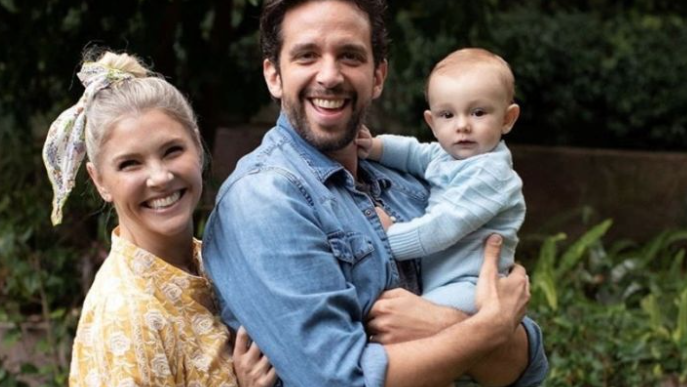 It’s been a long battle for Broadway actor Nick Cordero who, after more than three months, has succumbed to coronavirus and many complications. He died at Cedars-Sinai in Los Angeles last night at the age of 41 leaving his loving wife Amanda Kloots and one year old son Elvis.

Nick was a Tony Nominated actor for his role in Bullets Over Broadway and twice nominated for Drama Desk Awards for his roles in Waitress and A Bronx Tale.  He was known for playing tough guys.

He entered the hospital on March 30 and had a series of complications including mini-strokes, blood clots and septis infections followed by a temporary pacemaker. While unconscious and on a ventilator, he had his right leg amputated and medical teams were exploring double lung transplants.

Nick and Amanda met while he was playing Cheech in Bullets Over Broadway and they married in 2017.

Nick Cordero fought a long, hard battle,  Amanda sending him daily videos of herself and their son and urging friends to join a daily sing-a-long. Their GoFundMe page (now a memorial) has raised over $700,000 toward medical expenses. On the page, Amanda has written:

“God has another angel in heaven now. My darling husband passed away this morning. He was surrounded in love by his family, singing and praying as he gently left this earth. ⠀ I am in disbelief and hurting everywhere. My heart is broken as I cannot imagine our lives without him. Nick was such a bright light. He was everyone’s friend, loved to listen, help and especially talk. He was an incredible actor and musician. He loved his family and loved being a father and husband. Elvis and I will miss him in everything we do, everyday,”  – Amanda Kloots

This has been one of the saddest journeys to write about since Nick Cordero was first hospitalized. Rest in Peace!