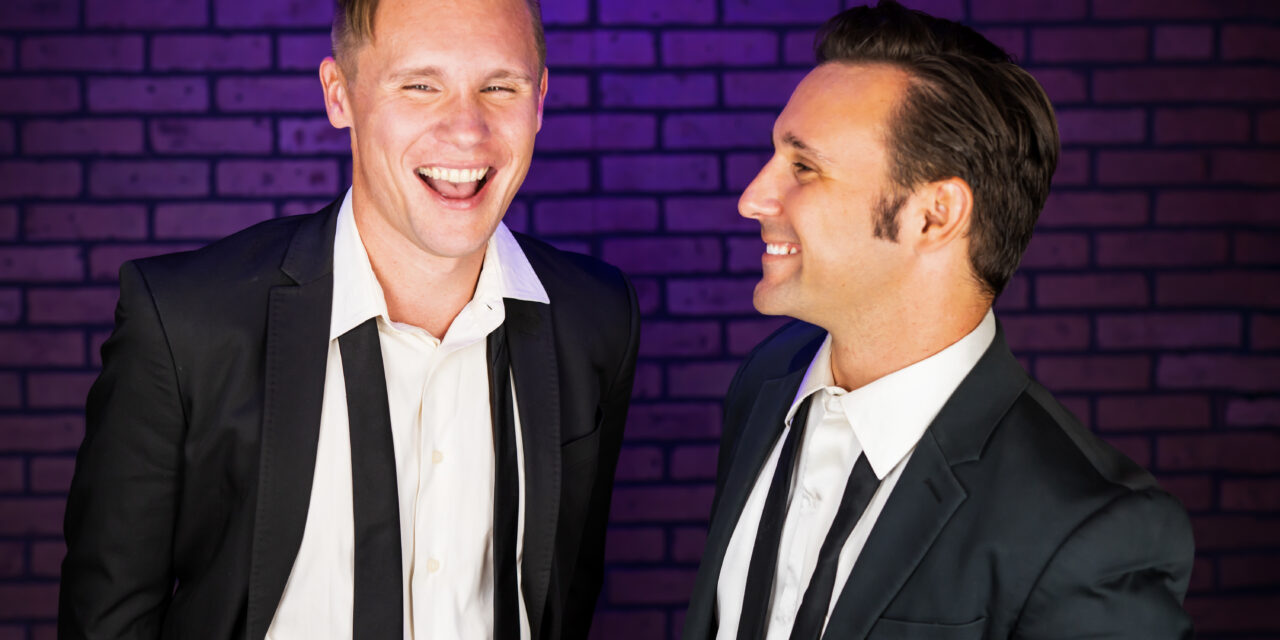 Nicolas King and Seth Sikes performed their new show, The New Belters, before a sold-out crowd at The Green Room 42 on October 29.  They described this first show as a “dress rehearsal” for their upcoming tour.

King and Sikes are two dynamic performers with different but overlapping strengths.  Though they shared circles and common friends, they hadn’t known one another before their chance encounter on a New York street earlier this year.  They quickly discovered more in common than either might have guessed, and a symbiotic partnership was born.  The New Belters is the happy result of this happenstance meeting.

Mr. King’s remarkable career began at the age of 4.  With mentorship from the likes of star Liza Minnelli and the late jazz pianist Mike Renzi and honing his craft through countless appearances and recordings, he is now a world-class performer with considerable charm and chops, easily straddling the worlds of jazz and cabaret like few others.  Seth Sikes is more the pure musical theater kid, a Judy Garland devotee with a lot of pizzazz and an impish smile that lights up a room.  Where Mr. King brings his tremendous musicality, showmanship and nearly three decades of experience, Mr. Sikes brings his own talents, an infectious enthusiasm and a rabid following.

A series of duets kicked off the act.  Their opening number, “Gotta Have Me Go with You,” from the Judy Garland version of A Star is Born, connected their shared worlds.  Nicolas and Seth sang here primarily in unison.  Their voices are close in timbre, with Seth’s a shade higher. They replaced some of Johnny Mercer’s lyrics on “Two of a Kind” with special material specific to their newfound friendship.

Mr. King quipped that they are a “male Steve and Eydie.”  After a spirited “Bosom Buddies,” he noted, “We understand that that was very cute.  We promise the rest of the show won’t be that cute.”  Seth can’t help but to recall the exact date the two first met.  “I know the date because it was two days before Judy Garland’s 100th birthday!”

Seth took the first solo segment, declaring, “I want to be a show stopper!,” performing several songs that flaunted his belting abilities.  A clever song parody revamped the dated Al Jolson song “On the Robert E. Lee.”  Noting that Lee’s name “is mud today,” Seth reworked it as a very funny song about a gay cruise, “The Good Ship Patti LuPone.”  He bared his sensitive side with a lovely take on Sondheim’s “Losing My Mind” that connected strongly with the audience.

Mr. King noted, “You can’t do a duo show without a duet from that iconic Judy show!”  Everyone likely expected the oft-recreated Garland/Streisand medley of “Happy Days Are Here Again” and “Get Happy,” but he seemingly read our minds.  “No, not that one!” The pair instead pulled off the Ethel Merman/Judy Garland medley that included “Friendship,” “Bosom Buddies” and “You’re the Top.” There was big, delayed laughter when Seth borrowed Merman’s line, “If I’m the bottom, who’s the top?”

The solo numbers were strongest in Mr. King’s hands.  While both are excellent entertainers, Nicolas is blessed with the extraordinary vocal control and timing of the finest jazz singers.  He told a humorous, touching story of first working with the late Mike Renzi at only 14 years of age, including a funny impression of Renzi.  He performed an unrecorded medley the pair worked on before Renzi’s untimely death in 2021, lovingly transcribed by Jon Weber, of “Spring Will Really Hang You Up the Most” and “Just One of Those Things.”  He took things to a fever pitch with a very swinging “Love for Sale.”  His scat solo here was spectacular, with multiple song quotes a la Ella Fitzgerald, and mixing in humor and a little shtick in the manner of Mel Tormé.  It earned him a well-deserved, mid-show standing ovation.

When Mr. King brought Seth back, he challenged him to attempt scat singing.  In a scene reminiscent of Jimmy Durante teaching a young Sinatra how to sing from the heart in It Happened in Brooklyn, this was a great bit, with Mr. Sikes trying gamely to keep up, finally reaching some small scat success at the lesson’s conclusion.

Nicolas King and Seth Sikes were backed by musical director Jon Weber on piano, bassist Steve Doyle, and drummer Daniel Glass.  Together, these “new belters” have a fun, compelling show that is bound to succeed.

Nicolas King and Seth Sikes The New Belters  took place on October 29, 2022 at The Green Room 42, located in in YOTEL Times Square at 570 Tenth Avenue, between 41st and 42nd Streets.  https://thegreenroom42.venuetix.com

All other Photos: Andrew Poretz