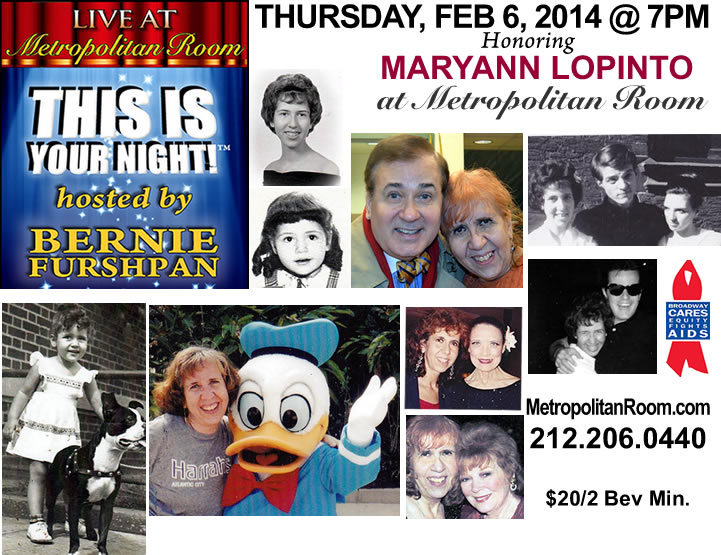 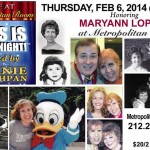 For those of you who haven’t heard of Maryann Lopinto, let me enlighten!  She has been a mainstay in the cabaret and entertainment community for many, many years (dare I say how many!) and a friend to all.  With her trusty camera in hand, she has single handedly appeared at almost every cabaret performance in every venue here in New York City and beyond to document a performer, a show, an event. Her photos are well known and appear in many publications, including TheaterPizzazz!

She is more than deserving of the honor that will soon be hers as the Metropolitan Room’s Managing Partner, Bernie Furshpan, acknowledges this special lady on February 6th at 7 p.m.  It will be a hot room in the old town that night!  I don’t want to give too much away, but I’ve already been told that some of the biggest names in the industry will be performing in her honor including:

This is Your Night!(TM) is based on a classic premise that is hosted by Metropolitan Room Managing Partner, Bernie Furshpan, and profiles a guest honoree who has contributed in some significant way to the NYC Entertainment Industry.  It can include, but not limited to: photographers, writers, bloggers, press, promoters, management, publicists, directors, musical directors, producers, etc.

The show presents a gift to the honorree, and includes a line-up of entertainment professionals who will share stories, song and comedy about they’re experiences and ends with a grand finale, a reunion.

A portion of the revenue will be given to the Guest of Honor’s Charity of Choice.